The following day we received a phone call from the installer that the replacement transmission “was doing the same thing,” so at this point we told them that we had to get the vehicle to our store to figure out what was going on.

When I first test-drove the vehicle it flared badly on the 2-3, 3-4 and 4-5 and had harsh downshifts. It felt as if it just had not completed its relearn procedure, and after several miles of driving it did start shifting better. I wanted to make sure that it was not a heat-related issue, so I disconnected the battery cables and tied them together for several minutes to clear the adaptive memory.

When we were finished and the installing shop made it out to pick up the Hyundai, it had sat at our shop over the weekend, which leads us to why the Hyundai had come back in the first place. The battery was completely dead; the combination of a bad battery and a GPS that was left on under the seat had completely drained the battery.

The customer did not tell the installer that the vehicle had to be jump-started right before the problem occurred. We installed a new battery and went through the 30-minute test drive and relearn procedure again, and all was returned to normal.

About two weeks after the first one, another 2005 Hyundai made it into our shop slipping in 3rd and 4th gears, and with burnt fluid and gear-ratio-error codes. We sold and installed one of our remanufactured transmissions, and on the initial test drive it had very harsh upshifts into 3rd and 4th. We had the battery disconnected during the R&R but we did have a battery memory saver installed to save the presets, so I figured that the transmission adapts had not cleared. I disconnected the battery cables and tied them together for several minutes, and the vehicle still shifted harshly and did not seem to come out of it, so I repeated this procedure and left it for almost an hour, with the same result.

After some additional research, I read through the TSBs for this vehicle again and there were four TSBs. All of them were related to relearn and reset of transmission adapts.

I read the first two TSBs initially when the first Hyundai had come in, and they were almost identical so I did not bother reading the others. That was my mistake. The fourth TSB had the following statement: “The transaxle controller adaptive values are downloaded to the controller EPROM when the ignition key is turned OFF, then uploaded when the ignition key is turned ON.” For this reason, the adaptive values cannot be reset by disconnecting the battery cable.

The Hi-Scan Pro must be used on vehicles built after the dates shown in Figure 1 to reset the adaptive values to provide smooth shifts after the following repairs:

This particular Hyundai was built after 08/01/2004 (Figure 1), which explains why the adapts would not clear with a battery disconnect. Since we did not have a scan tool with the ability to reset the adapts, we had to take it to a dealer to have the reset procedure done. After that and a lengthy test drive everything was operating normally again.

All manufacturers are different, and even the same car can have different procedures for resetting and relearning transmission adapts; know what you are working on and use the information available to you.

Advertisement
In this article:Hyundai, Slipping shifts

A Tale of two Hyundais

Recalibrating Nissan CVT8
Connect with us 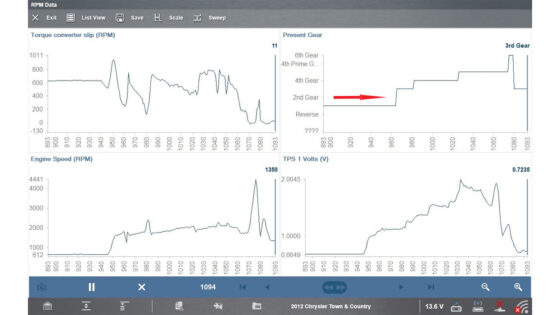