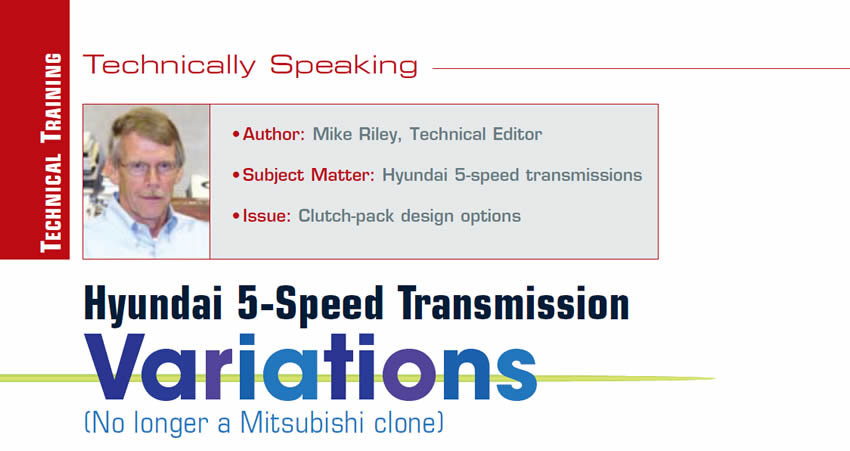 For a lot of years Hyundai, in order to avoid development cost, utilized Mitsubishi for their automatic-transmission needs. All that changed in the early ’90s when Hyundai decided to get into the research and development end of the business by releasing their version of the old Mitsubishi KM series of automatic transmissions. The Hyundai A4A/A4B series of transmissions was launched in 1993, which did have some noticeable differences from Mitsubishi, especially in 2000 when the F3 model was released utilizing six solenoids. Even the case configuration was different from Mitsubishi.

For a lot of years Hyundai, in order to avoid development cost, utilized Mitsubishi for their automatic-transmission needs. All that changed in the early ’90s when Hyundai decided to get into the research and development end of the business by releasing their version of the old Mitsubishi KM series of automatic transmissions. The Hyundai A4A/A4B series of transmissions was launched in 1993, which did have some noticeable differences from Mitsubishi, especially in 2000 when the F3 model was released utilizing six solenoids. Even the case configuration was different from Mitsubishi.

One exception to this changing landscape occurred in the late ’90s when Hyundai started to use the Mitsubishi F4A41/51 four- and five-speed series of transmissions for various vehicle models. Although there were some minor differences between the Japanese and Korean versions, the units were basically the same. All that changed in 2005 when Hyundai decided to do their own thing by producing the A5GF1/A5HF1 models.

There are several items different between the F5A and A5G/A5H transmissions, one of which makes little sense and that being certain clutch plates. The Hyundai A5GF1 is the lighter-duty version of the five-speed models and from a friction/steel standpoint does somewhat conform to the F4/F5A41 series. The big brother to the A5G is the A5HF1, which is in sync with the F5A51, capacity wise that is and one size does not fit all.

When Hyundai developed the A5H, they chose to have a couple of different versions based upon engine size. Beyond that, the month and year will also dictate which components are needed. The A5HF1 designed for the 3.3L engine is somewhat in sync with the A5GF1, with a couple of exceptions. For some reason Hyundai decided to go single-sided for the 2-4 and overdrive clutch packs. If that wasn’t bad enough, the 3.8L version received an extra kick to the overdrive clutch pack, just to complicate things a bit more. Dimensionally, the single-sided 2-4 plates somewhat conform to the double-sided design.

Whether the unit is Mitsubishi or Hyundai, overall clutch-pack layout is the same. The clutch pack responsible for the greatest variations between models is overdrive, which is contained in the same housing that includes the reverse clutch (Figure 1). The double-clutch assembly is positioned at the back of the transmission next to the end cover, and the housing is splined to and driven by the long input shaft. The reverse-clutch frictions spline to the sun-gear hub, whereas the overdrive internal toothed plates spline to a separate clutch hub.

Internally, the first clutch pack to be removed is for reverse and regardless of model consists of two frictions and two steels. The piston that applies the reverse clutches is actually a double-duty component (Figure 2). Not only does it apply the reverse clutch, it is also the overdrive clutch drum. Unlike the outer housing, which is steel, the reverse piston is aluminum and has teeth that mesh with the outer drum. The inner splines of the reverse piston mesh with the overdrive steels (F5A) or external tooth plates (A5G/H), depending on model. This arrangement applies to Mitsubishi models and Hyundai models, (except for 3.8L applications).

Overdrive clutch components consist of the aluminum apply piston, coil-return spring set and aluminum balance retainer (Figure 3). Mitsubishi applications and Hyundai models with the A5G unit uses regular frictions and steels that spline to the inside of the reverse piston. Hyundai A5H models with a 3.3L engine have the same configuration, although with single-sided clutch plates.

Due to capacity concerns, Hyundai decided to modify the overdrive clutch pack design on 3.8L applications. Basically, torque capacity was improved by providing clutch plates with a larger outside diameter as well as altering the external plate tooth configuration (Figure 4). The inside diameter of the internal toothed single-sided frictions remained the same to accommodate the existing clutch hub. Thickness of both the internal and external single-sided plates was also increased to provide a more robust clutch pack. Unlike other transmissions that use single-sided clutch plates, such as the 5R55S or 4F27E, the A5H clutch pack is a bit different. There is actually one double-sided friction that must be installed against the backing plate, with the remaining single-sided plates facing the correct position. Initially, the external plates had six teeth.

For some unexplained reason, Hyundai decided that particular arrangement was not quite good enough, so in February 2007 a slight tweak was made. The change involved was merely switching from a six-tooth external plate design to a five-tooth design (Figure 5). To make matters more difficult, the six-tooth plate design is no longer available, and servicing those applications requires a complete updated drum assembly, which isn’t cheap. The part number for the five-tooth clutch pack is 45421-3A 610 and contains all plates including the apply and backing plate.

To avoid purchasing an expensive drum assembly, there are a couple of options. One option is merely switching over to the more common Mitsubishi setup or hope that the six-tooth plates become available in the aftermarket. Another option is to purchase the five-tooth reverse piston from Hyundai under part number 45441-3A610 and upgrade to the five-tooth clutch pack. Piston designs will interchange (Figure 6). Although the three pistons illustrated look different, they will all fit into the outer steel housing.

The question remains, why did Hyundai take this approach with the overdrive clutch pack design and not just stick with the Mitsubishi design. Apparently, they wanted the external teeth to contact the steel housing instead of the aluminum reverse piston, (Figure 7). With that setup the external tooth plates would not eat into a soft aluminum part that has been the case with other transmission designs.

If only parts availability was as simple as making a design upgrade, rebuilding would be a little less difficult.

Sprinter 722.6 TCC Lockup Update (Not all fixes are good forever)

An article appeared in the January 2016 issue of Transmission Digest on page 33 and was titled “Sprinter 722.6 TCC Lockup Issues.” The article, originally published in the Transmission Tech/Talk newsletter, addressed a specific issue concerning a Dodge Sprinter coast down converter shutter-type of problem.

As a Sprinter accumulates mileage it can develop this rather unique shutter (droning) issue when coming to a stop, even though the unit works well along with a good lockup. As with any transmission family, a 722.6 can develop different types of problems requiring different fixes. Fortunately, companies in the transmission aftermarket have produced product to address some of these issues.

The focus of the article was that, if the unit worked well overall and the fluid and pan were in good shape, then it would be worthwhile to try the recommended fix, mainly because it was limited to the valve body. The upgrade to the valve body merely involves drilling a small hole in an end plate, not an expensive valve-body repair. Always ensure that lockup works well after doing this type of tweak.

Beyond the issues of the torque converter itself, there are a couple of valves in the valve body that can affect lockup apply and release, such as the TCC regulator and lube pressure regulator valves (Figure A). By drilling the end-plate orifice hole, a small amount of TCC solenoid control oil is exhausted, which allows the lockup clutch to completely release on coast down, eliminating the shutter. As with any fix of this type, extenuating circumstances can always exist.

Although at the time that this particular Sprinter was repaired using the upgrade, there can be other concerns down the road worth covering, as was pointed out by the good folks at Jasper Engines and Transmissions. The Mercedes 722.6 transmission family, including Sprinter models, has been on the road for a long time now and some units have been repaired or rebuilt more than once. What Jasper (and possibly other remanufacturers) is now finding is that a previous service repair can result in having problems after the transmission and torque converter are completely rebuilt.

For instance, doing a service repair such as this may be performed and actually work well, even though the TCC regulator valve is somewhat worn causing a cross leak. Later on, if the transmission would be rebuilt including repair to the regulator valve, then having an orifice hole drilled into the end plate could result in a bad or no lockup condition.

The same situation could occur, if during a torque-converter rebuild a modification is made, such as one provided by Sonnax involving the addition of return springs to the lockup captured clutch. That modification, along with the drilled orifice hole, could also result in a problem with lockup.

Based upon these possibilities, always inspect the valve-body end plate for the hole (Figure B). If one is found while doing a subsequent major repair, it would be prudent to close the hole.