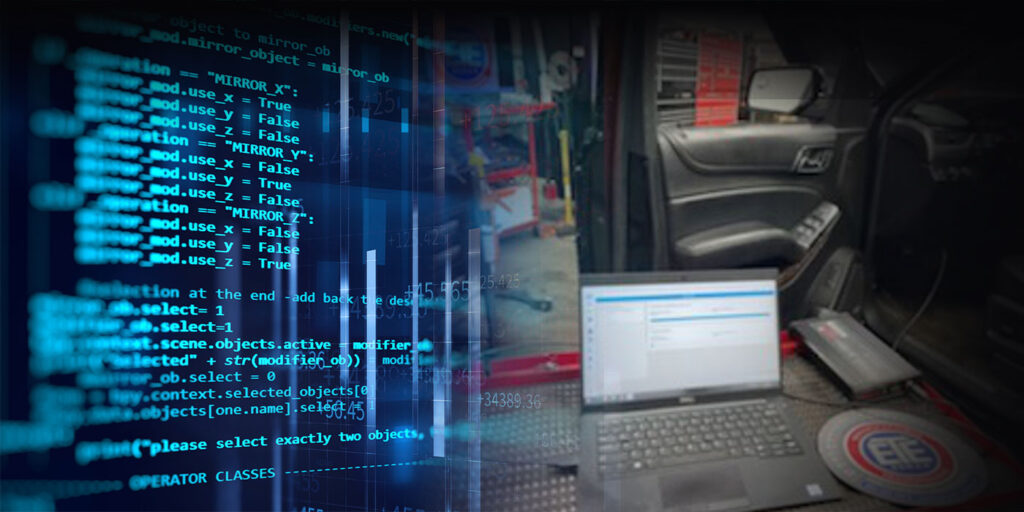 Programming modules have been an essential aspect of the complete repair and service experience (Figure 1) within the automotive industry for quite some time now. Not providing this service shortchanges both the shop and the customer; yes, the repair has been performed, but the vehicle is still not working as well as it could be. Aside from fine-tuning the work performed, programming the latest calibration updates into the vehicle often resolves issues beyond the specific repair completed. When it does, it’s always nice to hear a customer say, “My car never ran so well.”

When it comes to programming modules that control automotive transmissions, there is a difference between reprogramming and replacing a program, and it is all a matter of clicking the correct button (Figure 2).

To clarify, to “Reprogram” means to update the existing calibration with the latest software available. One such example of needing to “Reprogram” is if a vehicle comes to a shop exhibiting symptoms and/or codes that a TSB is addressing by updating the calibration to the latest software. To “Replace and Program” is to write a completely new and updated calibration. This is needed when fully replacing a transmission with either a new, remanufactured or used transmission.

When it comes to a TEHCM used in a GM 6L80 transmission, for instance, we have discovered that it is not overly sensitive to the VIN. Nor does it seem to be sensitive to GM’s Global Diagnostic System (GDS). Let me explain. This new security protocol was introduced here in the U.S. in 2010 and by 2014 was being used in all platforms. This Global Diagnostic System is often referred to as GM’s “Global A” system. The Body Control Module is the controlling module for the GDS system. It sends an “Identifier” signal over the serial data lines to which GDS compliant modules must respond by comparing module identification to the identification originally programmed into the BCM. If the BCM identifier is not recognized or receives an incorrect identifier from one of the other GDS compliant modules, it will respond by preventing the vehicle from starting.

With this brief understanding of what GDS is, the TEHCM used in a 6L80 transmission has not shown itself to be sensitive to this system. We have seen, on rare occasions, code U0101 setting for a Loss of Communication to the TCM, causing the vehicle to not start due to a variety of reasons unrelated to the GDS. What does occur on a regular basis is that when a previously used module is installed, an error message occurs indicating that there is no communication to the module along with a VIN mismatch. In these cases, the PID display remains functional, and the vehicle will start.

To remedy a used TEHCM that has a program installed into it associated with a different VIN, the option to “Replace and Reprogram” must be selected in the programming process, NOT just “Reprogram.”  This will allow the correct program associated with the VIN of the vehicle to overwrite the existing program and to install the latest updates, completing an optimum repair.

To be a bit more specific, a shop may be tempted to not perform any programming updates when a used TEHCM is installed from a different vehicle, and it seems to drive well. This is not the best way to send the vehicle out, as in most cases the program is not fitted for the vehicle it is in. Additionally, the latest updates are also not installed. This allows for pesky and annoying problems to lurk within the program that could result in repeated transmission failure; or, at least, continuous complaints from the customer about how the transmission doesn’t seem to shift right.

One of the more common issues that arises when swapping 6L80 TEHCMs is due to a running change made sometime between 2013 to 2014. New instrument clusters now provide Transmission Fluid Temperature data. This means the TEHCM is fitted with a program to provide both Transmission Temp for the TCM and for the Instrument Cluster. A mismatch in TEHCMs will usually show Trans Temp at -40°F. Replacing and reprogramming will resolve this as well.

Finally, unrelated to this, is the code that indicates a failure of the TCM itself. It is the code for an Internal TCM Temperature Overheat. This code means you need another TEHCM. It literally means it’s toast!