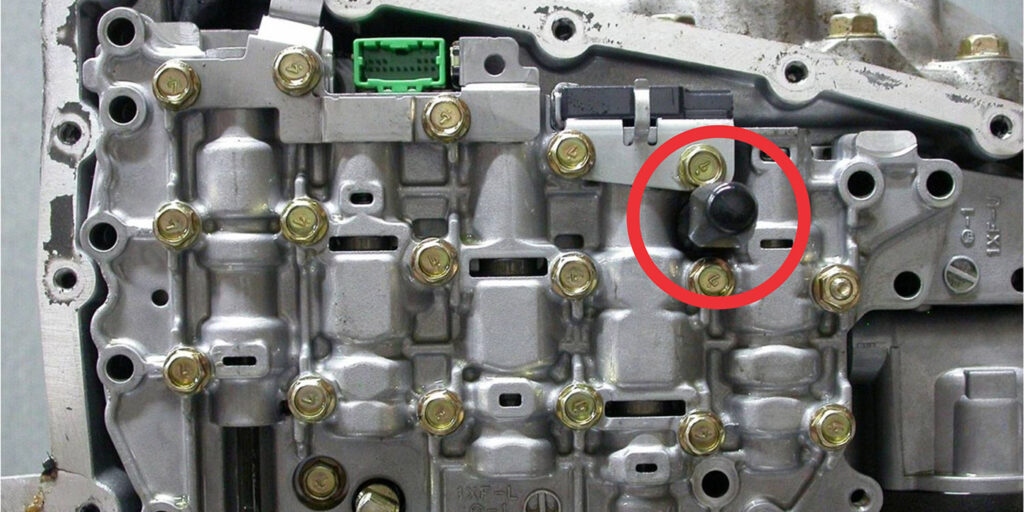 A 2.4L Dodge Caliper using a JF011E CVT2 transmission developed a problem with the Primary Pulley Pressure sensor. A low circuit error code P0842 was pulled from the TCM. The sensor ground and 5-volt wiring circuits were checked and verified as good. The signal wire was then inspected and was also verified as good.

There was a hope of finding a short or break in this wire making for a simple repair. With the integrity of the wiring being verified as good, the pan was pulled for inspection. The amount of debris on the magnets was somewhat typical and yet still enough to be concerned that there may be pulley damage. So, the valve body was removed to get a view of the primary pulley sheave face and the condition of the push belt. Everything looked very good.

At this point the technicians decided to change the Primary Pulley Sensor. When they discovered that a good known sensor could not be found, a new valve body and ROM assembly was ordered according to vehicle’s identification number.

Once the valve body was replaced, this continuously variable ratio transmission was reduced to one ratio only. A scan tool revealed that P0842 was no longer being set, but there was a new code in the system: a P0730 for incorrect gear ratio.

Going through the valve body is an access hole designed to be used with a tool with which to hold in place the ratio control valve assembly during both the removal and assembly process. Figure 1 (above) is a view of a handled pic already inserted into this access hole. Figure 2 shows the valve body being removed with the pic in place.

Figure 3 is a close-up view showing the tip of the pic holding the ratio control valve lever in place. This is also the proper position of the lever for when installing the valve body.

The end of this lever that the tip of the pick is up against indexes to the primary pulley follower as seen in figure 4. Figure 4 also shows how the Stepper Motor is linked into the opposite end of this lever. In between the lever is the ratio control valve going into the valve body. This is a spring-loaded valve, so there is a small amount of tension on the pic due to this spring.

During the removal of the valve body to inspect the ratio control motor, when a pic was inserted into the hole, it was being blocked from its complete insertion. This provided a clue as to what the problem was. When the valve body was removed, the problem became evident. Apparently, during the installation process, the pic used to retain the proper position of the lever pulled out far enough to allow the spring tension on the valve to mis-position the lever. When the valve body was bolted into place, the pin on the pulley follower was jammed against the lever. Figure 5 shows how the pin was pushed halfway through the follower. This prevented the stepper motor from moving the ratio control valve to ratio the transmission.

Figure 6 shows the way the pin should always be mounted in the follower assemble. To correct this error, the unit needed to be removed and disassembled. Not a good day to say the least; unless of course the customer is happy to have a one ratio CVT.