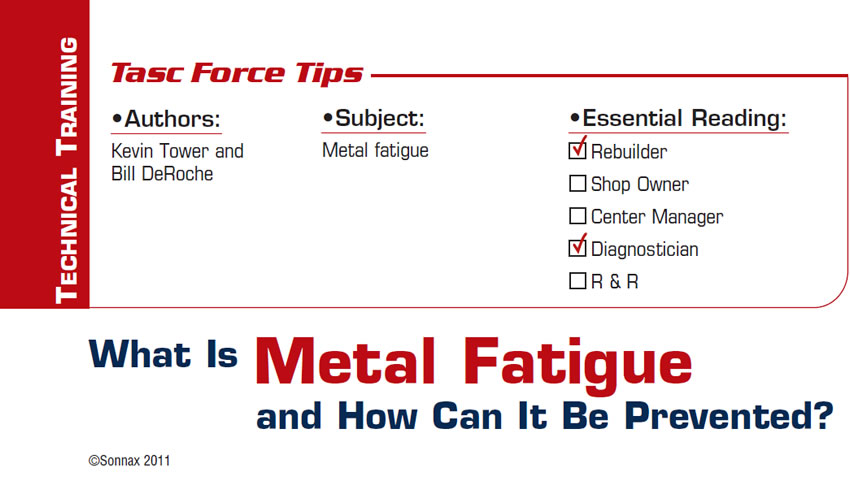 This football season is characterized by a preponderance of broken-down and injured quarterbacks. Numerous quarterbacks have been removed from games after repeated “sacks” from the on-rushing defense. A frequent observation from viewers is, “How long can this quarterback last under the strain of these repeated sacks and knockdowns?”

This football season is characterized by a preponderance of broken-down and injured quarterbacks. Numerous quarterbacks have been removed from games after repeated “sacks” from the on-rushing defense. A frequent observation from viewers is, “How long can this quarterback last under the strain of these repeated sacks and knockdowns?”

Failure sites in a quarterback include knees, shoulders, head and ribs. So, too, with transmission components, the failure sites are varied and include gear-teeth radii, gear-teeth flanks, shaft radii, shaft shoulders and extension-spring hooks, among many other locations.

Let’s take a closer look at metal fatigue and consider how it actually occurs. If you take a metal bar and flex it, you apply stress to the top and bottom of that bar.

After many, typically millions, of load cycles, fatigue cracks can start where the metal is being stretched in tension. This can occur as a result of repeated cycles even though the individual stress loads are well below the stress level at which the component would crack with just one cycle. It is important to note that fatigue cracks can never start where the metal is only being pushed together in compression.

In normal operation, many components in an automatic transmission experience significant numbers of repeated stress applications. Consider a shaft in torsion, a spring in compression or a pin in shear.

These frequent applications of force can often reach tens of millions of cycles in a relatively short time. Forces anticipated in normal operation combined with the high number of load cycles easily make fatigue failure a very real possibility. The trick, then, is to find a way to preload metal with a compressive strain, one that must be overcome by the strain of tension before any fatigue crack can start.

What is shot peening?

Shot peening involves the bombardment of a metal part by millions of tiny (typically 0.007- to 0.023-inch diameter) steel spheres, each of which slightly indents the surface upon impact. Sometimes, the peening media may be glass, conditioned cut wire or even ceramic beads. Under each indentation, a hemisphere is formed that tries to push the indentation back out to its original shape. This is called cold-working the surface. The resulting condition is a surface in compression, one that resists initial crack formation. The amount of compressive strain developed is quite high, typically up to 60% of the ultimate tensile strength of the metal. This very high magnitude of compressive strain must be overcome by the applied load before a fatigue crack can start at the surface, thereby greatly enhancing the component’s ability to withstand high stress loading.

Many issues must be addressed to achieve a properly shot-peened surface. Among them are shot size, shot impinging angle and velocity, and the duration of exposure. When all of these are correct, the resultant increase in fatigue life, or the ability to withstand repeated stress cycles, is considerably improved.

One common misunderstanding is that one can “shot-peen” a surface using a sand blaster. A sand blaster typically uses abrasive media to clean debris or rust from a surface. Frequently, it creates a surface that is full of tiny cracks. One key to the effectiveness of shot peening is the media. Peening shot is round balls only. Think of the round end of a ball-peen hammer, repeatedly dimpling the surface. During a high-quality shot-peening process, broken pieces are actually screened and removed to avoid their detrimental effect.

Many common manufacturing processes used to make metal parts can dramatically lower the fatigue strength of the part because they leave the surface in tension, a fact that is often not considered in the design process. Engineers tend to assume that if a part is dimensionally correct, and the material is to specification, all is as it should be.

Grinding, machining and welding can all leave the surface of the part in tension, a seedbed for metal-fatigue cracks. Hardening and plating can leave a hard, brittle surface and can damage or weaken surface grain boundaries.

Going back to our football analogy, some quarterbacks have the ability to withstand repeated “hits”; others limp to the sideline after one or two tough plays and are out for several weeks. What is the difference? We would have to say it is the overall makeup of the man, both mental and physical.

Similarly, with metals, some are better suited to withstand repeated tensile loads. Generally, metals with a higher tensile strength are able to withstand repeated cyclic-type loads than those with a lower tensile strength. Most important, those metals that have been properly manufactured, using beneficial processes such as shot peening, have been demonstrated to provide superior cycle-life results.

Kevin Tower, with more than 25 years’ experience in the shot-peening industry, is manager of technical service for the Windsor, Wakefield & Miami divisions of Metal Improvement Co. LLC, a Curtiss-Wright Corp. business segment.

What Is Metal Fatigue and How Can It Be Prevented?