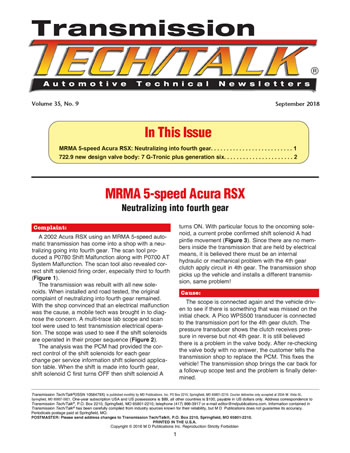 A 2002 Acura RSX using an MRMA 5-speed automatic transmission has come into a shop with a neutralizing going into fourth gear. The scan tool produced a P0780 Shift Malfunction along with P0700 AT System Malfunction. The scan tool also revealed correct shift solenoid firing order, especially third to fourth (Figure 1).

The transmission was rebuilt with all new solenoids. When installed and road tested, the original complaint of neutralizing into fourth gear remained. With the shop convinced that an electrical malfunction was the cause, a mobile tech was brought in to diag-nose the concern. A multi-trace lab scope and scan tool were used to test transmission electrical operation. The scope was used to see if the shift solenoids are operated in their proper sequence (Figure 2).

The analysis was the PCM had provided the correct control of the shift solenoids for each gear change per service information shift solenoid application table. When the shift is made into fourth gear, shift solenoid C first turns OFF then shift solenoid A turns ON. With particular focus to the oncoming solenoid, a current probe confirmed shift solenoid A had pintle movement (Figure 3). Since there are no members inside the transmission that are held by electrical means, it is believed there must be an internal hydraulic or mechanical problem with the 4th gear clutch apply circuit in 4th gear. The transmission shop picks up the vehicle and installs a different transmission, same problem!

The scope is connected again and the vehicle driven to see if there is something that was missed on the initial check. A Pico WPS500 transducer is connected to the transmission port for the 4th gear clutch. The pressure transducer shows the clutch receives pressure in reverse but not 4th gear. It is still believed there is a problem in the valve body. After rechecking the valve body with no answer, the customer tells the transmission shop to replace the PCM. This fixes the vehicle! The transmission shop brings the car back for a follow-up scope test and the problem is finally determined.

Final analysis: After performing a follow-up scope of the new computer to compare solenoid shift sequences with the original computer, it is discovered that shift solenoid C did not completely turn off (Figure 4). The PCM provides system voltage to the solenoid through the “High Side Driver-HSD” inside the PCM. When this solenoid is fully energized approximately 13.7 volts can be seen. When the HSD shuts off 0 volts should be observed. A closer look at the scope reading for shift solenoid C revealed that when the HSD turned off, voltage dropped to 2.1 volts rather than 0.

The solenoid resistance measured 14 ohm. A 14-ohm solenoid being supplied with 2.1 volts equates to a 0.15 amps current draw (2.1vdc / 14 ohms = 0.15 amps). These 0.15 amps prevented the solenoid’s magnetic field from collapsing, which simply means it remained ON rather than turning OFF.

Special thanks to Scot Manna from M.B. Automotive in Chicago.

The most significant change made with the 6th generation was to the torque converter, which incorporated a new feature known as “centrifugal pendulum damper” (Figure 5).

It is used to prevent noise, vibration and harshness (NVH) as the TCC apply strategy has changed from high-slip speeds when the TCC is applied to little to no slip (Figure 6).

In other words, the converter clutch is fully applied sooner, rather than slipping the clutch on. These changes were made in part to accommodate dramatic increase in torque generated by the new V-8 engine and the torque increase of the four- and six-cylinder diesel engines.

The torque converter lock-up clutch continues to utilizes a three-channel system, which has been improved in key areas. The path that the cooling oil takes to the clutch assembly has been redesigned to flow directly toward the coupling package. This provides for especially effective and efficient cooling. Another change was to increase the gap between the clutch disks increasing the overall clutch assembly clearance reducing drag torque significantly. The result is much improved performance, especially under cold-starting conditions when engaging a gear. Previous versions had a tendency to pull down en-gine rpms or even stall the engine under these conditions.

The 7 G-Tronic Plus transmission can be fitted with vehicles that features “start-stop” technology, which is paired to an electric pump to sustain line pressure when the vehicle is stopped (engine off). If so equipped, the electrical motor is fastened to the bottom side of the converter/pump housing.

As a result of these changes, particularly with the new “centrifugal pendulum damper,” significant changes were made to the valve body, which is the primary focus of this technical presentation. The K2 shift valve and the B2-2 shift valve have been eliminated as seen in Figure 7. This caused casting changes required to close off circuits once going to these valves. The shaded circuits identify these closed off passages in Figure 7.

The spacer plate received modest changes as well. Figure 10 is a typical spacer plate used in 7 G-Tronic transmissions identified by 2 or 3 notches.

Figure 11 is what a typical spacer plate will look like for the 7 G-Tronic PLUS transmission and is identified with a single notch.

Each of the K1, K2 and K3 clutch feed circuits have an added one-way check valve to control engagement and pre-fill pressures as seen in Figure 12.