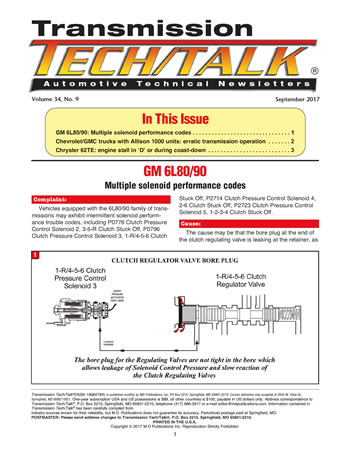 The cause may be that the bore plug at the end of the clutch regulating valve is leaking at the retainer, as shown in Figure 1, causing a slow reaction of the regulating valve and a loss of solenoid signal pressure, which in turn can cause a Solenoid Stuck Off code or a Solenoid Performance code.

Refer to Figure 2 for a view of each solenoid and its regulating valve lineup.

To correct this condition, remove the bore plug and with a tubing cutter, knurl the plug to stop the leak, then reinstall the plug. See Figure 3 for a valve body exploded view. At the time of this printing there are no aftermarket bore plug repairs with O-rings.

A Chevrolet or GMC truck with a 6.6-liter diesel engine and an Allison 1000 transmission may come into the shop with complaints of but not limited to:

The use of a non-OEM serpentine belt (Figure 4), because certain brands of replacement aftermarket belts are made of compounds that can generate significant amounts of electrostatic charge on their surface. It is the discharge of the electrostatic interference that can cause the above complaints.

The G102 ground point has been compromised (Figure 5).

Note: An aftermarket serpentine belt can be installed due to dimensional changes caused by an up-fitter installing additional belt-driven devices such as a second alternator or a hydraulic pump. This positions the belt closer to the TCM which can increase the possibility of EMI disturbances.
In situations such as these, it is recommended that the TCM be relocated to the top cover of the under-hood fuse box as shown in Figure 6.

CAUTION: Do not make any holes for fasteners in the UFB cover as this will compromise the water resistance of the cover. The use of a heavy-duty adhesive is recommended.

Solenoid-output pressure controls the position of the TCC switch and TCC control valves as shown in the partial hydraulic circuit diagram in Figure 8.

To correct this condition, replace the EMCC solenoid. Refer to Figure 9 for the location.

Note: There is much confusion in the Chrysler/Dodge parts system and OE printed repair information pertaining to the location and name of the EMCC Solenoid. Figure 9 shows that there are two Variable Force Solenoids, one in the solenoid body, which is used for line pressure control. The other is at the top of the valve body, which is the EMCC variable force solenoid, and used for TCC application. Early OE information doesn’t label either of the two solenoids as a EMCC solenoid, and in some instances labeled the EMCC as the VLP sensor. This confusion has caused shops to purchase the solenoid body, thinking that the EMCC solenoid is included and it is not, which results in the same problem when the vehicle is put back together.