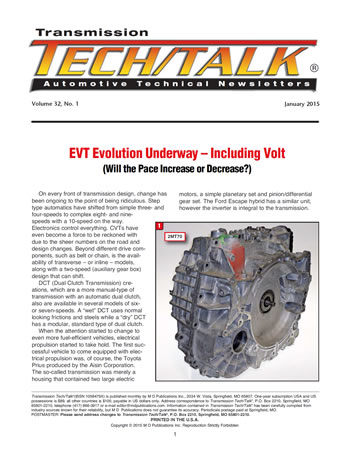 In This Issue
EVT Evolution Underway – Including Volt

On every front of transmission design, change has been ongoing to the point of being ridiculous. Step type automatics have shifted from simple three- and four-speeds to complex eight- and nine-speeds with a 10-speed on the way. Electronics control everything. CVTs have even become a force to be reckoned with due to the sheer numbers on the road and design changes. Beyond different drive components, such as belt or chain, is the availability of transverse – or inline – models, along with a two-speed (auxiliary gear box) design that can shift.

DCT (Dual Clutch Transmission) creations, which are a more manual-type of transmission with an automatic dual clutch, also are available in several models of six- or seven-speeds. A “wet” DCT uses normal looking frictions and steels while a “dry” DCT has a modular, standard type of dual clutch.

The so-called transmission was merely a housing that contained two large electric motors, a simple planetary set and pinion/differential gear set. The Ford Escape hybrid has a similar unit, however the inverter is integral to the transmission.

This type of EVT (Electrical Variable Transmission) is driven by either the ICE (internal combustion engine) or power pack and electric motors, or both. Plug-in versions merely add the option of charging the power pack with house current.

A more-passive electrical approach is IMA (Integrated Motor Assist) and, as the name applies, the system only helps the engine to turn. An electric motor is inline and will start the engine as well as provide some propulsion assistance based upon demand. Honda started the ball rolling with a hybrid in 2003 and this design also is being used by Hyundai on its six-speed A6MF2H. Even the GM 4L60E PHT (Partial Hybrid Transmission) took a swipe at this type of power assist.

To handle increased loads, GM released another type of electrical propulsion in 2007. The Chevy Tahoe was launched with the 2ML70 (two mode), which is a traditional transmission/electric motor combo.

The unit basically is a four-speed transmission with two large electric motors in the center. The Tahoe can be driven by the ICE shifting through four gears like a regular vehicle or be driven partially or completely by the electric motors. The 2ML70 could run a Sherman tank.

To accommodate front-wheel-drive cars, GM developed a lighter version of the 2ML70, but unfortunately that model fell on hard times. The 2MT70 did see limited action beginning in the 2009 Saturn but the demise of the Saturn brand in late 2010 put an end to it. General Motorsʼ overall financial condition meant limited usage in GM models as well, but only for a while. Other plans existed for the unit ultimately, and its successor is on the streets today.

The 2MT70 is sizeable for a front-wheel-drive transmission and not too light either (Figure 1).

As with other fuel-efficient vehicles, the 2MT70 accommodates start/stop by utilizing an auxiliary pump motor (bolted on internally) to provide pressure to the transmission with the engine off (Figure 2).

The auxiliary motor connects to a dual-purpose pump body (Figure 3).

The 2MT70 pump assembly houses two sets of gears. The large gear-set is for overall transmission operation and the small set is driven by the auxiliary motor for start/stop operation. In addition to the two sets of gears, there are two separate filters as well – one for each gear set.

The 2MT70 does not use a torque converter (which is why there is only an input shaft sticking out), but rather it uses a damper assembly with a bypass (start) clutch. The clutch will engage to allow the ʻAʼ motor to start the ICE or for the ICE to drive the transmission. The damper also drives the primary pump.

There are four clutch assemblies, two planetary sets and a mechatronic valve body. The 2MT70 also uses a main drive gear, pinion and ring gear for output to the wheels.

The input shaft is connected to the first clutch in the unit, which is the 1-3 reverse clutch assembly (Figure 4). To disassemble the clutch, the front ring-gear snap-ring must be compressed, which can be a chore. The clutch works as the name implies.

The 1-3 reverse clutch operates the front planetary gear set. The ring gear splines to the drum and the planetary splines to the frictions (Figure 5). A drive sleeve connects to the sun gear.

The last rotating clutch in the unit is the variable high 2-3-4 clutch assembly. Like the 1-3 reverse clutch, a ring-gear snap-ring must be compressed for disassembly, which requires some effort. The piston return spring is a Belleville design (Figure 7). In addition to the regular stated gears, the 2-3-4 clutch is applied when the ʻBʼ motor is in high range.

The rear planetary gear-set, like the front, is a simple gear set design (Figure 8). The rear ring-gear splines to the variable high 2-3-4 clutch drum and the planetary and sun gear connects to a sleeve and shell.

The remaining clutch in the unit is a stationary brake, which is for fourth gear. The fourth clutch uses only one friction and has an apply sleeve (Figure 9a).

The fourth clutch assembly is situated within the removable end cover (Figure 9b). The ʻBʼ motor sensor ring is also bolted into the cover.

The 2MT70, like its rear-wheel-drive cousin, uses to sizeable electric motors. The front ʻAʼ motor and the rear ʻBʼ motor are fairly comparable but are made differently than the 2ML70 motors (Figure 10).

To accommodate the temperature that the motors generate, there are rings that surround the coils for cooling (Figure 11). Use caution when removing these tubes to prevent bending or breaking.

The rotating rotors of both motors are heavy and highly magnetized. Use caution when handling to avoid pinched fingers or other damage. The ʻBʼ motor splines to the fourth clutch plate and has a center shaft (Figure 12a).

The rear part of the shaft has the reluctor teeth for the for the rear sensor ring which is bolted to the end cover (Figure 12b). Caution: Do not run rotors through a cleaning machine or they will look like a Chia Pet due to attracting metal particles.

The valve body used is a regular looking valve body that has gaskets bonded to the separator plate, which is always easy to remove (Figure 13). Fortunately, there are not a lot of valves to contend with (or other stuff, for that matter).

The 2MT70 is a mechatronic design, which means an internal TCM. The basic construction is that of a 6T70 or 6T40 (Figure 14). The electrical connector is also comparable and the TCM uses a hold-down bracket to dissipate heat.

As with other hybrids or EVs, the voltages involved are substantial. The cables used on this unit are pretty beefy (Figure 15). Always follow all safety procedures when working on this type of vehicle and power down everything that needs to be.

A New Life with Volt

Although the 2MT70 never received its place in the sun, so to speak, it did lay the ground-work for something that has – the Chevy Volt. GM is banking plenty on this vehicle. At first glance, the transmission in the Volt is a 2MT70, but not quite. The Volt unit (model 4ET50) does have some operational changes.

The goal was to be less of a shifting transmission and more of a PEV (Pure Electric Vehicle), meaning that the ICE does not propel the vehicle at all. Rather, the 1.4L generator propels the Volt in any form or not is subjective, the 4ET50 does differ from the 2MT70. The main differences are that the 4ET50 does not have a fourth clutch, only one planetary set and the electrical stuff is somewhat different.

Ultimately, if one model can be rebuilt, so can the other. In a relatively short time, the status quo has changed and a new generation of Volt transmissions is being launched for 2016, called the 5ET50. One main difference with the 4ET50 is that all the big cables are gone (Figure 16).

Internally, differences also exist (Figure 17). The ICE changed from a 1.4L cast block to a 1.5L aluminum block. The new design Volt is lighter, with greater mileage range, but time will tell as to public buy in. The vehicleʼs durability and the capacity to repair also will be a factor for the vehicleʼs success.