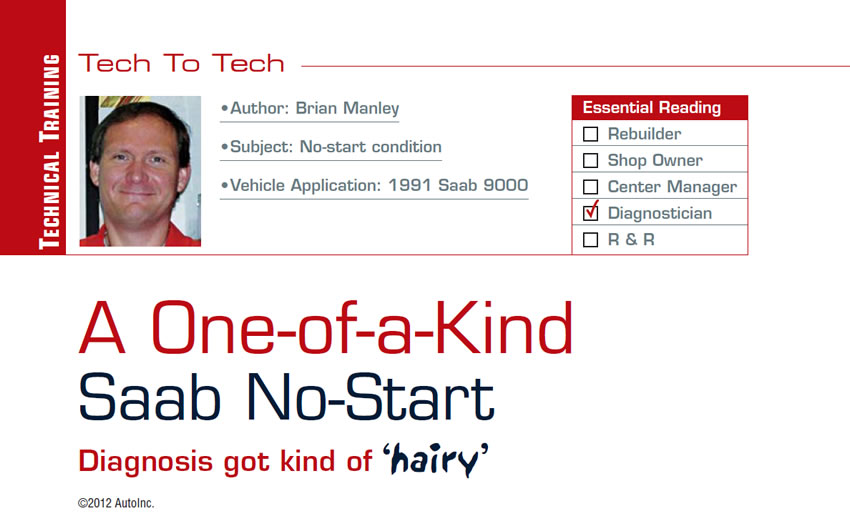 Diagnosis got kind of ‘hairy’

How often do you get to say this as a technician: “I have never seen this before”?

Such a day occurred for me recently when my customer had his 1991 Saab 9000 towed to our shop with a no-start complaint. Little did I know what I was in for! Spoiler alert: Do not look at the last two pictures yet; try to figure this one out first.

“I have been in this situation before,” I thought to myself, “and it always turns out to be more of an adventure than I had bargained for.” Just as those words left my brain, I accepted the challenge.

As odd as I find these Swedish, turbocharged 2.3-liter, five-door lift-backs, I also admire how unique they are, and how challenging they can be to diagnose. I approached this analysis as though Chris’s friend had never dabbled in the diagnosis, so I ensured that the salvage parts were actually the ones in the back seat and the original ECU and coil pack were installed in the car.

To prove what Chris had told me, we confirmed that we had strong spark from the coil pack, and we tapped into the fuel system at the filter with a banjo fitting to confirm fuel pressure; both spark and fuel pressure were present. We continued our diagnosis with a visual inspection of all the basic plumbing for the turbocharger, as these just flat out will not run if there is a significant leak in the induction system, and ensured that the air filter and vane air-flow meter were visually clean and moving as intended. We followed this with a basic compression test, which revealed readings of 130-140 psi for all four cylinders. The spark plugs looked new, but a bit wet, so we cleaned them before reinstalling. Another attempt to start failed.

There was just over 100,000 miles on the odometer, and the engine sounded normal while cranking, but it just would not run.

At this point, I was wondering if there was a remote possibility that the timing chain could have jumped one tooth, but the compression readings did not bear that out. I have had engines that had “jumped,” but most would show low compression readings or start and run, albeit poorly. There was a technical service bulletin (TSB) for “Rattling Timing Chain,” but this was the only engine-related TSB, and I could not find any pertaining to this no-start situation.

I desperately wanted to observe data stream and check for codes, but I did not have an OBD I-compatible Saab scan tool. I felt a bit challenged at this point because I could not gather all the diagnostic data that I wanted to. What to do next?

Since this was a turbocharged engine, I was now wondering if a seized turbo could be causing a significant restriction in the intake to prevent startup. I removed the clamps and the pipe from the turbo, and I physically spun the impeller by hand; it was free.

At this point, I began thinking about odd reasons for an engine that would not start but had spark, fuel, compression and new tune-up parts. I began looking at this vehicle from underneath but still saw no issues. On a hunch, I dropped the header pipe from the exhaust manifold, climbed into the front seat, and the engine fired right up!

Now, you may have discovered this much more quickly than I did – and we were now faced with an exhaust restriction – but I did not yet know where it was. We cut the catalytic converter from its pipe, but when we shined a light through the substrate, we could see no restriction. After shining a light into every pipe, we noticed something funny a few inches into the rear tailpipe. We grabbed a pair of long needle-nose pliers and grabbed the foreign object and began pulling. To my amazement, this hairy substance just kept coming out and coming out (Figure 2). I didn’t know if some little critters had decided to make their winter home in a Swedish location, or if somehow the engine had sucked in a full Halloween wig!

We continued pulling until we had removed what appeared to be 20 or more feet of “hair,” and we surmised that the interior of the muffler had simply decayed and plugged up the exhaust system. Yup, I had never seen that one before.

Brian Manley is a vocational automotive instructor for the Cherry Creek school district in Aurora, Colo. He is an ASE master certified automobile technician and a former member of the National Automotive Technicians Education Foundation (NATEF) board of trustees. He can be reached at [email protected].