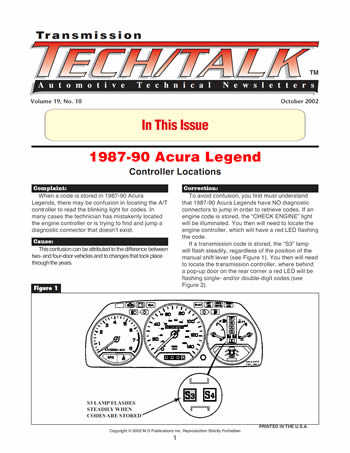 When a code is stored in 1987-90 Acura Legends, there may be confusion in locating the A/T controller to read the blinking light for codes. In many cases the technician has mistakenly located the engine controller or is trying to find and jump a diagnostic connector that doesn’t exist.

When a code is stored in 1987-90 Acura Legends, there may be confusion in locating the A/T controller to read the blinking light for codes. In many cases the technician has mistakenly located the engine controller or is trying to find and jump a diagnostic connector that doesn’t exist.

This confusion can be attributed to the difference between two- and four-door vehicles and to changes that took place through the years.

To avoid confusion, you first must understand that 1987-90 Acura Legends have NO diagnostic connectors to jump in order to retrieve codes. If an engine code is stored, the “CHECK ENGINE” light will be illuminated. You then will need to locate the engine controller, which will have a red LED flashing the code.

If a transmission code is stored, the “S3” lamp will flash steadily, regardless of the position of the manual shift lever (see Figure 1).

You then will need to locate the transmission controller, where behind a pop-up door on the rear corner a red LED will be flashing single- and/or double-digit codes (see Figure 2).

Here is why it starts to get confusing: The 1987 four-door Acura Legend sedan has a hydraulically shifted G4 transaxle, so it has only an engine controller. And guess where it is – under the passenger seat (see Figure 4).

The engine controller in ’87-’90 Legends has both red and yellow LED lamps. The red LED is used to retrieve engine codes when the CHECK ENGINE lamp is illuminated; the yellow LED flashes when there is a problem with engine idle control, and it has nothing to do with code retrieval (see Figure 6). The transmission controller has only a red LED. If you see two lights while looking for transmission codes, you are on the wrong computer! You can see the red LED in the transmission controller most easily from under and behind the seat, and it’s easiest to see the engine controller from under the front of the seat when it is in that location.

To increase the challenge of an already confusing issue, once you locate the right computer you then need to have the right code list, as that also changed through the years.

Figure 7 lists 1987 engine codes for the two- and four-door Legends.

The differences in the code lists between 1988-89 and 1990 models resulted from the replacement of the rotating-magnet speed sensor with two pulse generators.

Note: If the number of LED flashes exceeds the maximum number of codes listed in the code charts, the computer may be faulty.

When clearing transmission codes, rather than disconnecting the battery and losing the radio theft codes, pull the 7.5-amp alternator sense fuse in the under-hood fuse box as illustrated in Figure 12.