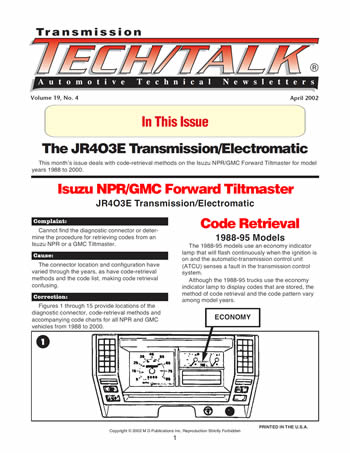 Cannot find the diagnostic connector or determine the procedure for retrieving codes from an Isuzu NPR or a GMC Tiltmaster.

The connector location and configuration have varied through the years, as have code-retrieval methods and the code list, making code-retrieval confusing.

Figures 1 through 15 provide locations of the diagnostic connector, code-retrieval methods and accompanying code charts for all NPR and GMC vehicles from 1988 to 2000.

Although the 1988-95 trucks use the economy indicator lamp to display codes that are stored, the method of code retrieval and the code pattern vary among model years.

If no codes are stored, the economy indicator lamp will come ON for 2 seconds and then go OUT.

If the code-retrieval procedure is performed but no codes are stored, the economy indicator lamp will flash continuously.

The economy indicator lamp will flash a judgment flash that will have remained on longer than the other flashes as indicated in Figure 3; the longer flash is the judgment code.

The 1988-90 trucks have a code-retrieval procedure and code display much like those of a Nissan.

The code chart listed in Figure 4 is for the 1988-90 trucks and indicates the judgment flash codes the ATCU is capable of storing. If the economy indicator lamp does NOT respond, check operation of the inhibitor switch, economy switch and bulb, kick-down switch and idle switch.

Codes can be cleared by removing the #11 fuse from the glovebox fuse box.

For 1991 the economy indicator lamp still flashes continuously when a code is stored by the ATCU. The code-retrieval procedure for the 1991 model year changed to a diagnostic connector that is jumped, causing the economy indicator lamp to flash the codes. The two-wire diagnostic connector is behind the glovebox, next to the ATCU, as shown in Figure 5.

The code pattern also changed and resembles the typical GM code format. The first digit has long flashes and the second digit has short flashes, as seen in Figure 6.

If no codes are stored, the economy indicator lamp will come on for two seconds when the ignition is turned ON and then go out.

If no codes are stored after the code-retrieval procedure is performed, a code 1 will be flashed repeatedly. If one code is stored, the code will be flashed three times.

When two or more codes are stored, each code will be flashed three times with each code displayed in numerical order.

Codes can be cleared by removing the #11 fuse from the glovebox fuse box as shown in Figure 8.

Everything for the 1992-94 model years remained the same except the location of the two-wire diagnostic connector, which moved to the driver-side kick panel adjacent to the brake master cylinder, as shown in Figure 9.

The code display pattern remains the same as for 1994 models. The location of the diagnostic connector also is the same as for 1992-94 models, but the type of connector has changed to a three-wire green connector. The outer two wires are jumped to retrieve codes as shown in Figure 11. These wires are yellow/black and solid black. Fuse #11 is still the one to remove to clear codes.

The diagnostic connector is still a three-wire green connector, and the outer two wires are jumped to retrieve codes. The wire colors to jump are black/white and solid black. The code format remains the same as well as the code chart.

To clear codes, you now remove the #16 fuse in the glovebox fuse box as shown in Figure 14.

Midway through 1995 a new body style was introduced; these were referred to as 19951⁄2 models. The major change in code retrieval was the light that flashes the codes.

19951⁄2-98 models use a check trans lamp (See Figure 12) that flashes continuously when the transmission control module (TCM) senses a problem and will flash the code pattern when the diagnostic connector is jumped.

Although the 1999-2000 trucks received a new transmission, the location of the diagnostic connector, code-retrieval procedure, function of check trans lamp and code format remain the same as for 19951⁄2-98 models. The only difference in this area is additional code capability as seen in the code chart in Figure 15.