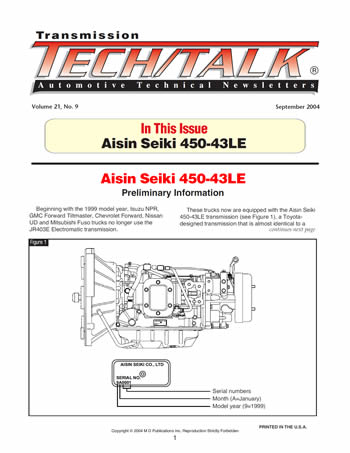 These trucks now are equipped with the Aisin Seiki 450-43LE transmission (see Figure 1), a Toyota-designed transmission that is almost identical to a 1993-94 Toyota Land Cruiser A442F transmission.

These trucks now are equipped with the Aisin Seiki 450-43LE transmission (see Figure 1), a Toyota-designed transmission that is almost identical to a 1993-94 Toyota Land Cruiser A442F transmission.

The 450-43LE is fully computer controlled, using five solenoids – two shift, one timing, one lockup and one pressure-control – for transmission operation, all controlled by a transmission-control module.

The transmission uses a three-element lockup-type converter, six friction elements, two one-way clutches and three planetary gearsets, as illustrated in the cutaway in Figure 2 and the clutch on/off chart in Figure 3.

The truck will not move in any forward gear range; there is no problem with reverse.

The low sprag, shown in Figure 5, has failed. The sprag elements have flattened and the inner race, which is the front planet carrier, has been worn down to the point where it will not hold (see Figure 6).

The entire front planet carrier and sprag assembly will have to be replaced.

The truck barely moves or there is considerable noise coming from the torque-converter area. The transmission fluid, when checked, is very dark and has a foul odor. When the pan is dropped and inspected, it is loaded with metal.

Note: When the transmission fluid is in this condition, the torque converter almost certainly is damaged and the pump body and pump cover also are unusable (see Figure 8).

Note: Observation of this condition has shown that the valve body is usually trash and cannot be successfully reconditioned. Figure 9 identifies the valve-body components.

The transmission is slipping badly in first, third and reverse gears. In some instances there may be difficulty in movement in either direction.

These complaints are due to the failure of the front (C1) clutch and the rear (C2) clutch, which also are known as the forward and direct clutches, respectively.

The steel rings wear the aluminum ring lands of the center support and the O/D housing, resulting in the failure of the front and rear clutches and causing the complaints described.

Replacement of the center support and the O/D housing will be necessary.

Note: Never use Teflon® rings on either of these assemblies; it will destroy the ring lands in a relatively short time.

After overhaul the transmission has no reverse movement and no third gear.

In the upper valve body is the C2 (direct) clutch checkvalve assembly (see Figure 12). This checkvalve contains a checkball that, if left out, will cause this complaint.

Note: For checkball locations refer to figures 13 and 14.