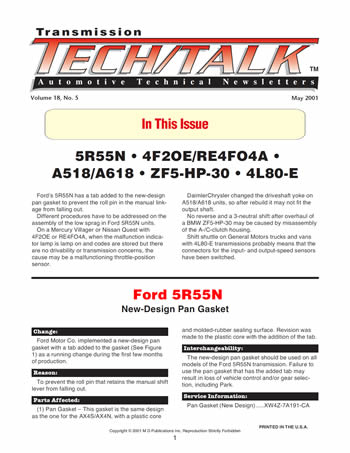 Ford’s 5R55N has a tab added to the new-design pan gasket to prevent the roll pin in the manual link-age from falling out.

Different procedures have to be addressed on the assembly of the low sprag in Ford 5R55N units.

On a Mercury Villager or Nissan Quest with 4F2OE or RE4FO4A, when the malfunction indica-tor lamp is lamp on and codes are stored but there are no drivability or transmission concerns, the cause may be a malfunctioning throttle-position sensor.

DaimlerChrysler changed the driveshaft yoke on A518/A618 units, so after rebuild it may not fit the output shaft.

No reverse and a 3-neutral shift after overhaul of a BMW ZF5-HP-30 may be caused by misassembly of the A-/C-clutch housing.

Shift shuttle on General Motors trucks and vans with 4L80-E transmissions probably means that the connectors for the input- and output-speed sensors have been switched.

Ford Motor Co. implemented a new-design pan gasket with a tab added to the gasket (See Figure 1) as a running change during the first few months of production.

To prevent the roll pin that retains the manual shift lever from falling out.

The new-design pan gasket should be used on all models of the Ford 5R55N transmission. Failure to use the pan gasket that has the added tab may result in loss of vehicle control and/or gear selection, including Park.

Some different procedures need to be addressed on the assembly of the low sprag on the 5R55N transmission (Figure 2) from Ford Motor Co.

Some of these procedures are enough different that some misassemblies easily could occur if the technician did not refer to the manual. ATSG will have an assembly/disassembly manual available soon.

A 1996-97 Mercury Villager or Nissan Quest with the 4F2OE or RE4FO4A transaxle comes in with the malfunction indicator lamp (MIL) on and possible code P0120 for a throttle-position-sensor (TPS) fault, P0510 for an idle-switch fault, and/or one or more of the gear-ratio error codes P0731, P0732 and P0733 stored, yet no drivability or transmission concerns present.

What you observe during the road test is that the MIL illuminates during coast-down from 40 mph (64 km/h).

The cause is a malfunctioning throttle-position sensor (TPS). When the vehicle is coasting down from 40 mph (68 km/h) or higher, the idle switch is indicating closed throttle. The transmission control module (TCM) senses higher-than-idle TPS voltage and a decrease in vehicle speed and engine speed; this will cause one or more of the codes mentioned to be stored.

Any of these stored codes are retrieved from the ECM only. The TCM has no codes stored.

Diagnose the idle-switch circuits as illustrated in Figure 6 and replace the TPS if the idle switch is faulty.

Many thanks to Dominick Tietrantonio from AC Transmission, Addison, IL.

Chrysler Corp. increased the outside diameter of the output shaft in the spline area, which increased the contact area of the yoke splines for improved durability. The yoke changed at the same time to accommodate the output-shaft change (See Figure 7).

There are two ways to correct this concern. If it is after installation, the easiest way is to buy and install the late driveshaft yoke, available under OEM part number 4384437, as it will fit both early and late output shafts.

1991 and later BMW vehicles equipped with the ZF 5-HP-30 transmission may have no reverse when the selector lever is placed in the Reverse position. This condition usually occurs after over-haul.

The cause can be incorrect assembly of the A-/C-clutch housing. If the clutch housing has been severely damaged, aluminum material will be evident in the bottom pan upon inspection.

When the unit is removed and the A-/C-clutch housing is disassembled, it is not uncommon for the unit to sit for more than a week waiting for parts. During reassembly it is very easy to mistakenly place the B-clutch hub (Figure 8, Item 8) on top of the retaining snap ring for the A-clutch pack (Figure 8, Item 10). This misassembly will result in neutralizing on the 3-4 upshift, and the trans light will begin flashing.

Ensure that you place the B-clutch hub on top of the A-clutch stack as shown in Figure 9, and then install the A-clutch pressure plate and snap ring.

After initial take-off, a 1-2-2-1 shift shuttle occurs and continues up to about 12 mph, when the transmission shifts to third and fourth gears.

The connectors for the input- and output-speed sensors have been switched.

1993 and earlier 4X4 vehicles will have a third speed sensor in the transfer case. The connector plugged into this speed sensor contains the light-blue and dark-green/yellow wires.