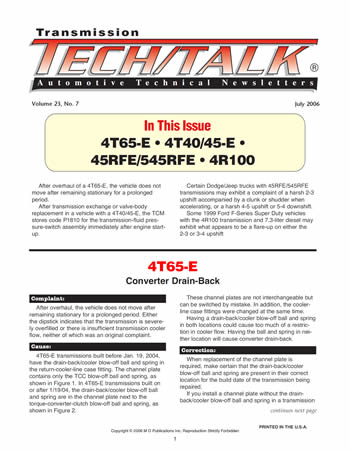 After overhaul, the vehicle does not move after remaining stationary for a prolonged period. Either the dipstick indicates that the transmission is severely overfilled or there is insufficient transmission cooler flow, neither of which was an original complaint.

These channel plates are not interchangeable but can be switched by mistake. In addition, the cooler-line case fittings were changed at the same time.

When replacement of the channel plate is required, make certain that the drain-back/cooler blow-off ball and spring are present in their correct location for the build date of the transmission being repaired.

If you install a channel plate without the drain-back/cooler blow-off ball and spring in a transmission with a build date of 1/19/04 or later with the intention of installing the return-cooler-line case fitting that has the ball and spring, this will not work.

Note #1: The function of the drain-back/cooler blow-off ball and spring is to seal the cooler return-oil circuit when the engine is off to prevent converter drain-back, which will cause a delay in forward or reverse movement after the vehicle has remained parked for a long period. It also is meant to unseat and exhaust the cooler circuit should cooler pressure exceed 100 psi.

If the drain-back ball is held off its seat by debris in the system, converter drain-back will occur.

After transmission exchange or valve-body replacement, code P1810 for the transmission-fluid pressure-switch assembly (TFPSA) is stored immediately after engine startup.

A 2004 or later transmission or valve body was installed into a 2003 or earlier vehicle.

At the start of 2004 production a newly designed TFPSA with only three pressure switches (see Figure 5) was used. At the same time, since the pressure-switch feed passages in the valve body no longer were needed, they were cast shut as shown in Figure 5.

In addition, the pressure-switch-assembly connector cavity is the same for both the early- and late-design units, which you can see in figures 4 and 5. This means the early and late assemblies will connect easily.

When a late transmission is installed into an earlier vehicle, upon ignition cycle the TFPSA has an open circuit because of one less terminal and wire, immediately causing the P1810 code to be stored.

2000-01 Dodge Dakotas and Durangos and 1999-2001 Jeep Grand Cherokees equipped with the 45RFE or 545RFE transmission and the 4.7-liter engine may exhibit a complaint of a harsh 2-3 upshift accompanied by a clunk or shudder when accelerating, or a harsh 4-5 upshift or harsh 5-4 downshift (2001 Jeep only).

The TCM or PCM requires a “shift-quality-enhancement” software update.

When all diagnostic procedures have been completed to address these complaints and the complaint is still present, the TCM or PCM will require reprogramming.

This will require a scan tool (DRB III) that is capable of interfacing with the Mopar Diagnostic System 2 (MDS2) to download the necessary revisions.

When the reprogramming is complete, an Authorized Software Update Label (see Figure 6) must be placed near the emissions label.

The reprogramming process may cause diagnostic trouble codes to be stored in one or more modules. Be sure to complete the repair by clearing all DTCs.

Some 1999 Ford F-Series Super Duty vehicles with the 4R100 transmission and 7.3-liter diesel may exhibit what has been described as a flare-up on either the 2-3 or 3-4 upshift. The rise of engine speed is typically in the range of 200-300 rpm.

The actual problem is not that there is a flare-up during the 2-3 or 3-4 upshift; the complaint results from the PCM strategy that controls the timing of the torque-converter-clutch release during the 2-3 and 3-4 upshifts. This flare feeling is actually the TCC releasing, as commanded by the powertrain control module, during either the 2-3 or 3-4 shift. This has led many technicians to modify and replace accumulator valve bodies, usually with little or no success.

Correcting this condition requires replacement of the solenoid pack (see Figure 7) with the latest revision, Ford part number F81Z-7G391-CB, and reflashing the PCM with the latest calibration per Ford Motor Co. Technical Bulletin 99-8-1.