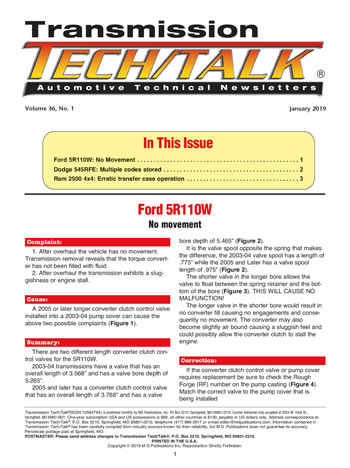 A 2005 or later longer converter clutch control valve installed into a 2003-04 pump cover can cause the above two possible complaints (Figure 1).

The shorter valve in the longer bore allows the valve to float between the spring retainer and the bottom of the bore (Figure 3). THIS WILL CAUSE NO MALFUNCTION!

The longer valve in the shorter bore would result in no converter fill causing no engagements and consequently no movement. The converter may also become slightly air bound causing a sluggish feel and could possibly allow the converter clutch to stall the engine.

If the converter clutch control valve or pump cover requires replacement be sure to check the Rough Forge (RF) number on the pump casting (Figure 4). Match the correct valve to the pump cover that is being installed.

A 2005 Dodge truck equipped with a 4.7L engine and 545RFE transmission has been repaired. The truck now exhibits trouble codes for the line pressure sensor and the right front O2 sensor.

The line pressure sensor and the right front O2 sensor have the same terminal configuration and have been cross connected.

The line pressure sensor connector is a 4 cavity connector but only three wires are used (Figure 5).

A 2008 Dodge RAM 2500 4×4 6.7L diesel using the 68RFE with the NV273 transfer case comes to the shop with erratic transfer case operation after 45 minutes to one hour of driving.
The TF case would suddenly pop into neutral or, while in 4WD HIGH, it suddenly goes into 4WD LOW while driving. The 4WD service light comes on intermittently while the 4WDH/4WDL lights might come on and go off. All of this happens mostly when hot and in reverse. The TF switch works just fine when the problem occurs enabling the driver to get back into 2WD but quickly acts up again. The customer also mentioned that this problem got worse after it rained.
The transfer case control module (TCCM) functionality now resides in the totally integrated power module (TIPM). The TIPM controls the 4X4 transfer case shift functions via the actuation of a shift motor and utilizing the feedback of a mode sensor assembly. Communication is via the CAN bus. Inputs include user selectable 4X4 modes that include 2WD, AWD, 4HI, 4LO, and neutral (selections vary with the specific transfer case). For this reason, TF case codes will be found in the TIPM and you may also find codes in the cluster module. The codes that were pulled was C1404 which is a TF case range position 5-volt supply wire sensor circuit low and B2112 which is also a 5-volt supply circuit low code (Figure 7).

Once it was determined that this vehicle did not have a TCCM, wiring diagrams were pulled for the TIPM. This revealed a yellow with an orange tracer colored wire as being the 5-volt supply wire going to the TF case range position sensor from terminal 9 in the TIPM’s C4 connector. When this wire was traced, it was discovered that it went through a loom down to the transmission. When this loom was viewed from underneath, a harness bracket was seen that was bolted down by a right side converter housing bolt (Figure 8).

A careful inspection in this area found that this bracket had dug itself into the wire loom piercing through a yellow wire with an orange tracer shorting it to ground (Figure 9).

Repair any and all wires that have been compromised and reposition the harness bracket to prevent future intrusions that would cause shorts to ground.