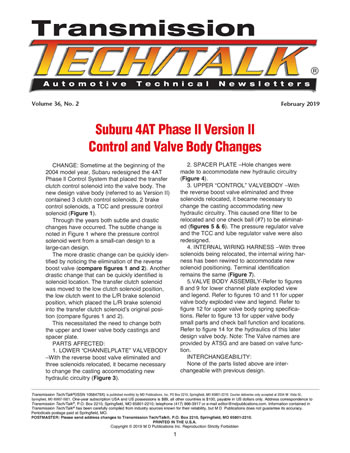 Through the years both subtle and drastic changes have occurred. The subtle change is noted in Figure 1 where the pressure control solenoid went from a small-can design to a large-can design.
The more drastic change can be quickly identified by noticing the elimination of the reverse boost valve (compare figures 1 and 2).

UPPER “CONTROL” VALVEBODY – With the reverse boost valve eliminated and three solenoids relocated, it became necessary to change the casting accommodating new hydraulic circuitry. This caused one filter to be relocated and one check ball (#7) to be eliminated (figures 5 & 6). The pressure regulator valve and the TCC and lube regulator valve were also redesigned.

Refer to figures 10 and 11 for upper valve body exploded view and legend.

Refer to figure 14 for the hydraulics of this later design valve body.

Note: The Valve names are provided by ATSG and are based on valve function.

None of the parts listed above are interchangeable with previous design.