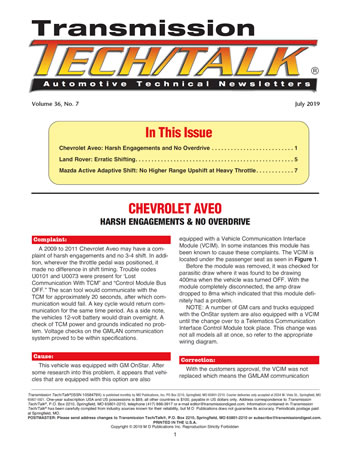 A 2009 to 2011 Chevrolet Aveo may have a com-plaint of harsh engagements and no 3-4 shift. In addi-tion, wherever the throttle pedal was positioned, it made no difference in shift timing. Trouble codes U0101 and U0073 were present for ‘Lost Communication With TCM” and “Control Module Bus OFF.” The scan tool would communicate with the TCM for approximately 20 seconds, after which com-munication would fail. A key cycle would return com-munication for the same time period. As a side note, the vehicles 12-volt battery would drain overnight. A check of TCM power and grounds indicated no prob-lem. Voltage checks on the GMLAN communication system proved to be within specifications.

This vehicle was equipped with GM OnStar. After some research into this problem, it appears that vehi-cles that are equipped with this option are also equipped with a Vehicle Communication Interface Module (VCIM). In some instances this module has been known to cause these complaints. The VCIM is located under the passenger seat as seen in Figure 1.

Before the module was removed, it was checked for parasitic draw where it was found to be drawing 400ma when the vehicle was turned OFF. With the module completely disconnected, the amp draw dropped to 8ma which indicated that this module defi-nitely had a problem.
NOTE: A number of GM cars and trucks equipped with the OnStar system are also equipped with a VCIM until the change over to a Telematics Communication Interface Control Module took place. This change was not all models all at once, so refer to the appropriate wiring diagram.

These wires are yellow and purple at the TCM, which can be seen in the wiring diagram in Figure 3.

These wires also are routed to the VCIM, which can be seen in Figure 4. The wires were separated from their respective connectors and spliced together yellow to yellow and purple to purple.
After this repair the codes were cleared, communi-cation was restored and the shift complaints were gone. As a side note, the vehicle’s 12-volt battery no longer went dead overnight.

A 2006 Range Rover S equipped with the ZF6HP26 transmission came into the shop with complaints of wrong gear starts and erratic shifting.
After a wide open throttle forced downshift and then coming to a stop, the vehicle would take off in third or fourth gear. A scan tool confirmed that the wrong gear starts were commanded by the TCM. The transmission would upshift from third or fourth gear to fifth and sixth gears.
When the vehicle came to a stop and the Tiptronic feature was used it would take off in first gear and shift up until a forced downshift after which it would return to wrong gear starts. No fault codes were present.

Inflating the soft tire to match the rest of the tires on the vehicle cured all the wrong gear start and erratic shift complaints.
In retrospect, had a “Stagger Gauge” been used to check the circumference of each tire, a difference would have been seen when the measurement of the soft tire would have been compared with the other tires (Figure 5).

A difference in wheel speed RPM data could have also been observed through a scan tool.
Note: As an example, vehicles equipped with the NAG 1 or 722.6 transmissions that use rear wheel speed sensor input to calculate vehicle speed, can have complaints of not up-shifting into higher gears due to different tire circumferences.
The use of a “Stagger Gauge” quickly checks the circumference of each tire in inches as indicated by the sliding ruler on the stagger gauge.
In odd complaints such as these it is always a good practice to check tire circumference. If a stagger gauge is not available a soft tape measure can be used to measure the diameter at the center of each tire. There should not be more than a quarter of an inch difference between all four tires.
This tire issue is one of the top causes of all wheel drive mechanical failures especially with “Active” trans-fer case systems.

Some Mazda 6 models from 2005 to present equipped with the AW6A-EL (TF81SC) may have a complaint of no up-shift to fourth, fifth or sixth gears under heavy throttle conditions. Under normal throttle conditions the transmission shifts through all gears.

The way the car may be driven is the cause of this complaint. If the driver accelerates rapidly, or acceler-ates and decelerates rapidly by operating the throttle and brake pedal for a certain time period with the shift lever in the “D” position, Active Adaptive Shift control will be initiated by the TCM. When this occurs, ASS Mode will maintain the transmission in the optimum gear, which creates the no shift condition. This means that the TCM will keep the transmission from up shift-ing to prevent shift busyness and to ensure that upon re-acceleration there will not be engine lugging and that a smooth transition into the next gear will take place.

This information can be read in the owner’s manual of the vehicle.

There are a number of strategies associated with ASS operations such as:

Sport Mode:
When SPORT Mode is selected, the AAS selects a lower gear compared to when normal mode is selected; this maintains that gear for a longer time period.

Brake pedal is suddenly strongly depressed: When decelerating at a certain speed, a lower gear is selected so that reacceleration is performed smoothly.

When cornering:
While cornering in a turn with a radius less than a specified value, up-shifts are suppressed to improve vehicle speed performance (Figure 6).

Higher speed merging:
Under a condition of temporarily decelerating while merging onto a high-speed expressway, up-shift is suppressed directly afterwards to improve re-accelera-tion performance (Figure 7).

Advertisement
In this article:Automotive Technical Newsletter