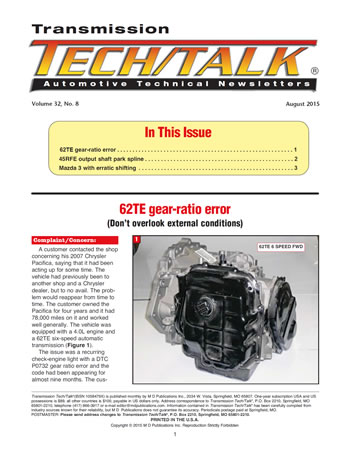 A customer contacted the shop concerning his 2007 Chrysler Pacifica, saying that it had been acting up for some time. The vehicle had previously been to another shop and a Chrysler dealer, but to no avail. The problem would reappear from time to time. The customer owned the Pacifica for four years and it had 78,000 miles on it and worked well generally. The vehicle was equipped with a 4.0L engine and a 62TE six-speed automatic transmission (Figure 1).

The issue was a recurring check-engine light with a DTC P0732 gear ratio error and the code had been appearing for almost nine months. The customer stated that everything was normal for a stretch of time, and then all of a sudden he would notice the check-engine light on the dashboard. He would then continue to drive the vehicle with the same routine, and at some point after several restarts, the dash light would be off.

The customer initially took the vehicle to the first repair shop with the check-engine light on. The technician connected a scanner and pulled the P0732, then erased the code and drove the vehicle again. All upshifts and downshifts worked normally and the vehicle was given back to the customer. All worked well for a period of time until it happened again. The customer took the vehicle back to the shop for a second time and the technician repeated the same drill. Again, the P0732 code was cleared and when driven the transmission worked fine. Frustration levels were starting to build.

As time passed, the mysterious check-engine light would come and go until the customer took the vehicle to a Chrysler dealer to see if they could handle it. The outcome was the same, the code was cleared and the unit worked well.

For lack of anything tangible, the dealer recommended replacing the input and output speed sensors in the event that one of them was sending an erratic signal. As before, once the sensors were switched, the vehicle was driven and went one-two-three until the light reappeared. The question became what to do next. Talk of TCM and transmission replacement was bandied about, but reason prevailed and they were not replaced, basically because the customer did not want to spend the money.

The 62TE is a busy shifting transmission with six basic forward speeds, but actually has a seventh, which is called the fourth prime. Although the main part of the 62TE is like the 41TE, the compounder is what provides the additional gears. Itʼs the compounder low and direct clutches that cycle, to expand the traditional 41TE power flow (Figure 2). With all the clutch-apply activity, any little glitch could be responsible for the P0732 code.

Although the check-engine light was the ongoing problem, it never resulted in the transmission going into limp mode. Normally it takes 3 to 4 repeated events before fail-safe occurs; however, the Pacifica never did.

When the customer arrived with his tale of woe, stating what was wrong, what was done and how the check-engine light would appear, the focus started to shift away from the transmission to anything else. After pulling a Dick Tracy to find out exactly when the light would come on, the customer started to realize that the problem would occur mainly going down a certain road. The road in question was a back road full of bumps and holes that required him to play with the steering wheel and gas pedal.

It was finally determined that the combination of gas/brake pedal movement and rough terrain was causing wheel hop that would trigger the code. In the end, the customer found another route and eliminated the problem. The computer can certainly pick up minute variations, even when it shouldnʼt. Goes to show, never overlook external conditions.

When rebuilding a transmission, a rebuilder will almost always notice the big item failures – the ones that are obvious, that is. However, sometimes the less obvious wear or fatigue may slip by. Certain transmission models are prone to valve or bore wear in the valve body, sealing-ring wear in the bore of a drum or support or subtle gear wear of a ring gear/sun gear or planet pinion.

Another area of concern is spline wear of various components. At first glance, the spline of a stator support, planetary carrier, or connecting shell may look OK, but in reality significant wear can exist and not be noticed due to the fine cut of certain splines. It is important to always closely inspect all mating splines to determine the extent of any wear.

The rear planetary in the 45RFE is the input planet, which is attached to the output shaft. The middle area of the output shaft has splines cut into it to accommodate the park gear (Figure 4). The park gear is a slip fit and is held in place by a snap ring.

In 2003, the winds of change blew and the output shaft/park gear spline was changed due to either a premature-wear concern or to handle a vehicle with increased GVW. If there is one area of transmission design that can get over engineered, it is the park system. A vehicle rolling down the hill unintentionally due to a park issue is bad. To make a more robust park arrangement, the output-shaft splines and park gear splines were lengthened. By lengthening the spline of both components, a greater load could be applied to the transmission in park, without worry of spline strip out. This action was a phase-in during the 2003 production year and the previous designed items were NLA, under output shaft # 4799500AB and park gear # 4799493.

The new component part numbers had changed a few times. The input planet/output shaft assembly part number started out as an “AB” suffix, but ended up with an “AG” suffix currently. The park gear has ended up being 4799493AB and will work for 2003-up models. Most models of 45RFE are 4WD and part number 4799500AG is for 4WD. Two-wheel drive models would be different, if needed.

Until recently, an update package containing the new design output and park gear was available under part number 5135165AB (Figure 5). That package is now no longer available.

Used components are out in the field and it is a good idea to change up to the newer design. Interchanging components is not possible. An older park gear on a newer design shaft would result in front-to-back looseness, and a newer park gear on an older output would prohibit snap-ring installation. The length of the output spline is 0.550” 1st design and 0.665” 2nd design (Figure 6).

When rebuilding a 45RFE, or for that matter, any transmission, closely inspect all spline areas for wear. Beyond that, for vehicles carrying excessive loads, always do the upgrade when available.

Special thanks to Transtar for providing the components used in this article as well as OEM product information.

A customer was experiencing an erratic transmission condition with his 2006 Mazda 3 series vehicle. The Mazda was equipped with a 2.3L DOHC engine and a FNR5 (FS5A-EL) 5 speed automatic. The vehicle had 105,000 miles on it but ran fairly well, when not acting up, that is. Garage shifts were solid and at times the higher gears did apply as expected, which meant that clutch and band integrity was OK. Even the torque converter would apply under certain conditions. Cold or hot, did not make much difference in the inconsistent operation of the transmission.

In conjunction with the shifting and lock-up issues was that a check-engine light was on. A scanner was connected and trouble codes were pulled. There were two trouble codes stored in the memory, A P0715 and P0744. The P0715 code concerns an input/turbine speed-sensor malfunction. The other code was a P0744, which has to do with a slip-control malfunction issue.

The two DTCs represent a variety of possible failure areas from an RPM sensor or shift solenoids including connectors and wires to the forward clutch. Another possibility is the TCM itself. Once all of the external items were inspected, such as wiring harnesses and connections, the next step was to rule out the simple stuff like the input speed sensor.

The questions were, which item or items could be causing the various issues that the FNR5 was experiencing? It is a cause-and-effect scenario, meaning, is one area of operation or control influencing another to trigger its own DTC? Could an erratic speed-sensor signal cause the computer to think that a particular component is not functioning correctly? Since a P0715 was set, looking at the ISS would be the first step, which it was. The problem was that it tested good, at least at the time of testing. Beyond that, could the ISS be causing all of the driving issues even if it was bad?

When testing any speed sensor, there are specific aspects that should be verified and following a given procedure is a good idea (Figure 9). As illustrated in the chart, testing sensor output with an oscilloscope is a key test as well as checking the sensor with an OHM meter for the correct resistance.

Although there were several different driving symptoms indicating big-time problems as well as the ISS testing OK, it was decided to change the ISS anyway (Figure 10). With a new ISS installed, not only did the transmission operation change like day and night, but lock up worked great as well.

In addition, not only was the P0715 DTC gone, so was the P0744 code that basically pointed to forward clutch failure. One DTC is good; two DTCʼs can create more confusion at times. Therefore, it always pays to go simple at first and not end up with a transmission in pieces and an unhappy customer.