62TE shifting issues: A problem caused by the invisible 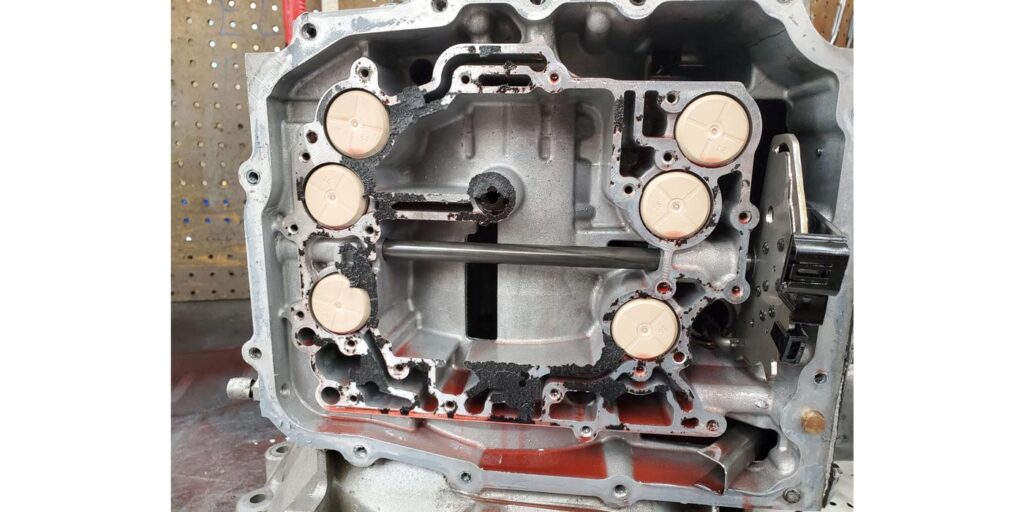 A rebuilt 62TE transmission gets installed into a 2016 Dodge Grand Caravan with a 3.6L engine. Three thousand and four hundred plus miles later, it develops a variety of shifting problems with no codes stored. The transmission is pulled and when the valve body was removed from the transmission, something unusual is now staring you in the face. A good portion of the gasket from the bonded spacer plate remained on the case (figure 1, above).

It was as if the gasket was glued to the case. The same thing occurred when the Transfer Plate was removed from the space plate (figure 2). Nothing else was found. There was no evidence of overheating. No damage to the clutches. The valves were free, and the fluid looked and smelled good. Could it be a “solenoid assembly?”

While scrutinizing the transmission, a good tech named Gary Waltho said that it reminded him of what he saw in a Ford that had a bad cooler causing the engine coolant to get into the transmission fluid. By the look and smell of the fluid it was easy to determine it was contaminated in this way. And the gaskets were stuck on the valve body in a similar way. But the fluid in this transmission looked and smelled the way it was supposed to. No evidence of this was seen. But, to exhaust all possibilities, a HACH Glycol Detection Test Kit was obtained and used for testing the fluid. The color change that task place with this test reveals milligrams per liter. If it is yellow/brown, there is 0 to 30 mg/L present. Gray/green indicates 30 to 100, gray/purple represents 100 to 150 while intense purple is greater than 150. And to the surprise of all, intense purple was the result of the fluid contamination in this transmission (figure 3).

This was the first anyone has ever seen this occurred with a Grand Caravan but more interesting than that is the lack of evidence that it was filled with glycol. The invisible causing the problem. Maybe this isn’t a new concept; it’s just that we can’t see it.