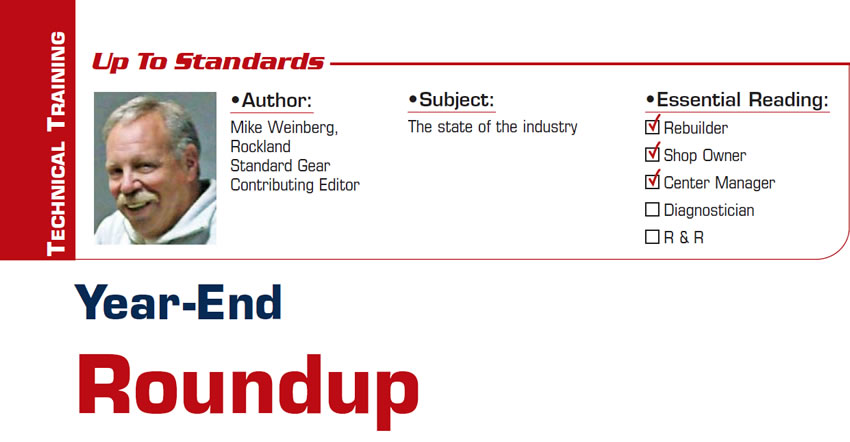 We have reached the end of another year, and a wild year it was. Business in some areas has shown modest improvement, but on the whole I believe most shops are far from happy with the results.

We have reached the end of another year, and a wild year it was. Business in some areas has shown modest improvement, but on the whole I believe most shops are far from happy with the results.

The proliferation of parts continues without end. There are now a whole lot more parts necessary to properly rebuild or repair a transmission or transfer case. Parts pricing keeps escalating as manufacturers pass on the costs of higher commodity prices and other expenses to the aftermarket. Never did I dream 30 years ago that we would have to get the prices we are seeing today. In the end the finished product is costing our customers more, and there are fewer sales to go around.

The competition has changed dramatically, with the vehicle manufacturers through their dealer networks becoming very aggressive competitors. They have several weapons at their disposal, one being “captive parts.” Captive parts are those for which the carmaker owns the tooling and their suppliers are forbidden to sell outside of the OEM network.

This, in my opinion, is a foolish policy, because if the customer cannot have a component repaired quickly at a fair price, the brand name falls out of favor with the customer. We have all had vehicles that needed fairly simple repairs, but the individual parts were not available to us even from the dealer, and the customer was forced into buying an entire unit, new or remanufactured, from the dealer.

In some instances they are very price competitive, where it is flat-out cheaper to buy a new or reman unit from the dealer, as you cannot build it cheaper yourself. This started on the engine side with “crate motors,” which you can buy brand new from the dealer with an excellent warranty, cheaper than you could ever properly rebuild the unit yourself. This has spilled over into the transmission side now.

Another issue is the availability of information and the proper tools to correctly diagnose and repair the newer units. This forces the shop to buy a greater variety of equipment and technical information from outside sources to be able to make the correct updates and “reflash” computer programs etc. There is the “right to repair” law, but I believe it is an industrywide auto-manufacturer policy to try to keep the aftermarket outside looking in. There are a number of great people in various trade associations fighting to get access to all the correct info. They are fighting for your rights and you should make every effort to join and support these trade associations, as it is a David and Goliath battle.

The next issue is the government, which on federal, state and local levels is assuredly anti-business. The ever-increasing tax burden, coupled with an endless supply of regulations, adds considerable expense to the cost of doing business. The economic downturn, which started for our industry earlier than for a lot of others, can be blamed squarely on government stupidity. No one can spend their way out of debt. The only cure is to stop spending, cease irrational waste of tax dollars and to STOP spending. How many jobs have been regulated out of existence, how much money has been wasted and how much stupidity on the bureaucratic side does it take to flush the whole deal down the toilet will soon become evident.

For instance, the infamous “cash for clunkers” deal, run by people who couldn’t find their butt with both hands, severely impacted our industry. They took out of the market 750,000 vehicles that will no longer be available to our industry to work on. On top of that they had no specification as to which brands the people who received buyout money could spend it on. It would have been nice if they had specified that the money could be spent only on cars built in the USA, thereby keeping jobs from evaporating, but common sense did not prevail.

We have seen an irrational growth in government involvement in every facet of private industry and a huge jump in government hiring and pay scales. To have growth in the Gross Domestic Product (GDP), you must take raw materials and convert them into salable product. Government cannot do this, except by declaring war. We have a congress that passes very complicated legislation like ObamaCare (some 12,000 pages in the bill) without reading the legislation.

For example, you may not be aware that in this bill there are many areas that have nothing to do with forcing government health care down our throats but more to do with paying for this trillion-dollar mistake. One example is a provision in this bill stating that any citizen buying more than $600 of gold must report that purchase to the IRS. Further along in this debacle is a new sales tax of 3% to 3.5% on home sales. You heard right – when you sell your home now the buyer must pay a sales tax of 3% to 3.5% on the purchase. The fools who voted for this couldn’t tell you about it, because they didn’t read the bill; they just passed it.

If the primary need of the country is to create more jobs so that people have more money to spend, why is there so much regulation that penalizes companies that are profitable? For instance, companies in the U.S. that do business internationally cannot repatriate the money they earn overseas without paying a 35% tax on that income. In Europe money earned outside the country is taxed at zero to 2%. At this time there is $1 trillion owned by U.S. companies that will not be brought back here to increase corporate earnings, which in turn increases new-product development, corporate profit, shareholder dividends and more jobs.

Does anyone really understand the numbers involved here? In federal and state governments they throw billions and trillions around like garbage. Let’s break it down into something everyone can figure out. There are 60 seconds in a minute. One million seconds divided by 60 equals 16,666.67 minutes. 16,666.67 minutes divided by 60 equals 277.78 hours. 277.78 hours divided by 24 equals 11.57 days. One billion is a 1,000 million, and that translates into 11,570 days. Divide that by 365 days and a billion seconds becomes 31.70 years. One trillion is a thousand billions, and using our trusty calculator a trillion seconds equals 31,700 years.

Are you now getting the picture? These clowns have no downside. They leave office and we have to pay for their mess. Well, at these numbers we can’t pay for this mess, so our grandchildren’s grandchildren will be paying this with no end in sight, and we haven’t even discussed compound interest. Remember this little exercise when someone tells you it costs only a couple of billion for this new program. You don’t have to worry about a few angry terrorists; the real terrorists are your elected officials.

Lest you think all is lost, it is not. The recent elections have shown that the quiet American wage earner has had it and the winds of change are sweeping out the garbage. It is up to you and me to now hold our elected officials’ feet to the fire and bring back some economic sanity. It is not the member of one party or another; it is all the members of both parties who forgot that they were elected to serve us, not for us to serve them. Don’t let them off the hook.

I spoke some time ago of new technological advances, basically the death of planetary transmissions with torque converters. Dual-clutch technology is here in a big way. In case you aren’t up on this new transmission here are the basics. We take what is basically a manual-clutch-driven transmission and we advance it. We have two input shafts, one inside the other. We have one or two countershafts. Let’s assume it is a six-speed. There are two clutches, one driving the inner input shaft, one driving the outer input shaft. The inner input shaft drives the 1st, 3rd and 5th speed gears, while the outer input shaft drives the 2nd, 4th and 6th gears. A computer controls the clutch and gear selection, and there is no clutch pedal.

This is already-established technology being used in many present-day vehicles. The technology is brilliant, making a very compact unit for packaging in a variety of small and large cars, getting rid of 30-some-odd pounds of torque converter spinning on the engine crankshaft, and getting rid of the necessary slip built into the torque converter so the vehicle does not stall when stopped, but requiring various methods of lockup at speed for better fuel efficiency.

This also cuts the cost of manufacture by getting rid of the ever-more-complex planetary and clutch packs and leaves us without the complicated and prone-to-wear valve-body and solenoid configurations that now grace our benches every day. According to a recent performance magazine from Ford Motor Co., Ford (no small player in the automotive field and one smart enough not to take federal money) expects to have its entire vehicle line running on some form of dual-clutch transmissions by 2013.

Let us give some poetic license to the author of that article and say that the company doesn’t have it completely done by then, but at best it is only a couple of years farther down the road. Don’t get nervous; we have the skills needed to repair this technology.

I remember when lockup converters first reappeared in the market. Many technicians were nervous about this so-called new technology, but it wasn’t new. The old Packard Ultramatic used a clutch in the torque converter to shift into third gear. It was new to the young guys, but we veterans had already worked on this setup. It has since been vastly refined, but it ain’t new.

We already handle very complex computer-control issues on a daily basis; the pages of this magazine are endlessly devoted to them, because that is what this business is all about. We can do this, because no one out there is as qualified. The only thing that is constant in life is change, and we will adapt to this with a shorter learning curve than anyone else available. The end is not here, only a new beginning. We are like the Marines: We don’t die; we just go to hell to regroup.

I wish you all a happy, healthy holiday season and a more-prosperous New Year.

Advertisement
In this article:state of the industry, Up To Standards 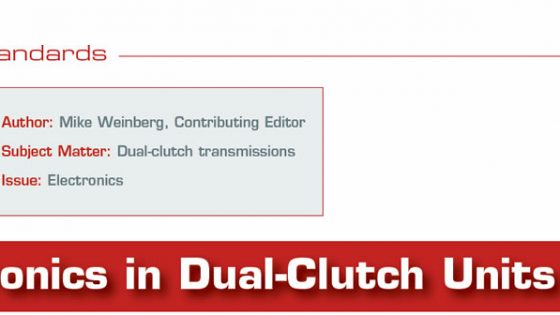 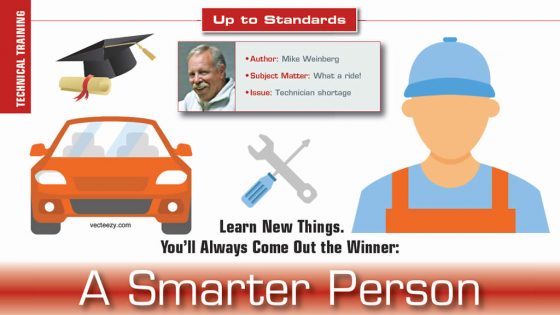