Automatic transmissions began to envelope the market in the 1950s and throughout the ’50s, ’60s and ’70s there were basically two types of automatic transmission fluids. Type A and type F: A being the first version of Dexron and principally found in GM and Chrysler units, and Type F which was specified for Ford vehicles. Type A fluid was redesigned to become Type B fluid, the first variation of Dexron product. In the 1970s two events occurred that changed the lubrication requirements forever.

The first was an international moratorium on whaling and the end of whale oil being part of the ATF. The second was the gas crisis when OPEC flexed its considerable muscle and vehicle manufacture would never be the same. To obtain better fuel economy, engines were spec’d to run at higher temperatures, and this had a direct effect on both motor oil and ATF. GM then changed the specs for ATF and created Dexron II, type C and D, and Ford created a spec fluid called ESW M2C33-F. The advent of centrifugal and piston-driven lockup torque converters, which further improved fuel economy, made further lubricant development necessary to eliminate vibrations and chatter that the driver could feel.

Ford created ESW M2C166-H and Dexron began to morph into Dexron III. The Ford C5 was a variation of the C4 that used a centrifugally applied converter clutch and a new fluid was created ESP M2C166-H. This solved some of the chatter problems, but heat degradation increased, and they went back to the drawing board to create new specifications – and Mercon was born. Mercon has since grown into Mercon V, which was able to replace all previous Ford fluids.

The science of specifications in lube oils is unbelievably complicated.

Additives: The base petroleum makes up about 80% of the bottle and the additives are the rest. The petroleum never breaks down, it is the additive package that wears out. Components of the additives create the color, the ability of replacement product to mix with the factory fill, viscosity (to be explained in detail further on), flash point, shift feel, anti-foaming product, elastomer compatibility, coefficient of friction, oxidation behavior at high temperatures, transmission cycling, vane pump function, wear tests, and extreme pressure functions.

Viscosity is defined as the internal resistance to flow of a liquid, which seems simple enough until one gets into all the variations in specification and real world factors such as temperature. There are many groups such as the SAE (Society of Automotive Engineers) that set the most common viscosity standards for ATF, manual gear oil, engine oil, and rear end lube. Besides temperature, consideration must be given to moving parts that the lubricant is designed to protect from wear.

Containability signifies the ability of the motor or trans to contain the oil within the structure of the component and to have that oil reach every part of the internal structure that needs to be lubricated and protected. Therefore we have multiple viscosity oils. Viscosity is basically a measure against the flow of water which for the purpose of this article will be zero. Therefore a 0-40W motor oil will have the ability to flow like water in cold conditions at engine startup and the ability to act as a heavier fluid flow at operating temperatures.

Corrosion and rust inhibitors preserve the metallic parts and prevent rusting of all parts in contact with the lubricant.

Dispersants keep contaminants that are not soluble dispersed in the fluid.

Friction modifiers change the coefficient of friction of materials such as clutch plates and synchro rings to reach a desired level of performance and feel.

Viscosity modifier controls or reduces the effect and rate of viscosity change due to temperature variation.

Antifoamant is used in components moving at high speeds in engines and transmissions that can create a persistent foam in the unit.

Antioxidant prevents decomposition of the lubricant due to oxidation which occurs through heat and free radicals.

Right lube for the job

In automatic transmissions we have gone from simple gerotor pumps to vane driven pumps, some units being equipped with more than one pump. There have been tremendous changes in clutch materials, seal materials, synchronizer composition, computer controlled solenoid shifted transmissions and different metals and plastics in everyday use.

Manual transmissions have gone from splash lubrication to forced lubrication. Transfer cases have significant new demands for computer-controlled clutch-driven units, and rear ends now have viscous couplings and vacuum and electric lockers. CVTs and dual-clutch transmissions are everywhere and must use very specific lubricants for a good driving experience. One of the basic rules for success in your shop is “always use the lubricant that is specified by the OEM for the trans you are working on.”

Discipline yourself to use these very expensive fluids no matter what the time frame is. Example, it is Friday afternoon; the unit is installed in the car for a customer who needs it for the weekend. You do not have the correct fluid, the customer wants his car, and you want his money.

Putting anything else into that vehicle will be committing financial suicide, and the death of a thousand cuts while you try and straighten out the problems caused by the wrong lube. There is, however, a bright side in that if you carefully explain to your customer exactly why the oil costs so much and what it does, you can increase your bottom line by making sure the car owner comes back for scheduled oil changes and other preventive maintenance procedures. 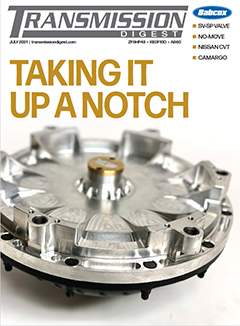