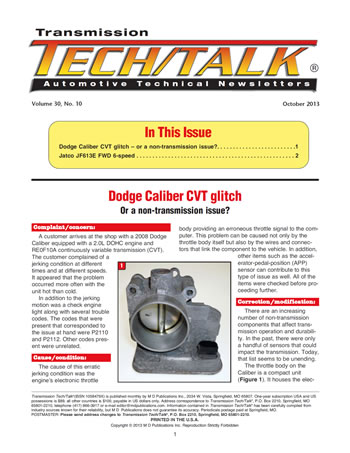 A customer arrives at the shop with a 2008 Dodge Caliber equipped with a 2.0L DOHC engine and RE0F10A continuously variable transmission (CVT). The customer complained of a jerking condition at different times and at different speeds. It appeared that the problem occurred more often with the unit hot than cold.

In addition to the jerking motion was a check engine light along with several trouble codes. The codes that were present that corresponded to the issue at hand were P2110 and P2112. Other codes present were unrelated.

The cause of this erratic jerking condition was the engineʼs electronic throttle body providing an erroneous throttle signal to the computer. This problem can be caused not only by the throttle body itself but also by the wires and connectors that link the component to the vehicle. In addition, other items such as the accelerator-pedal-position (APP) sensor can contribute to this type of issue as well. All of the items were checked before proceeding further.

There are an increasing number of non-transmission components that affect transmission operation and durability. In the past, there were only a handful of sensors that could impact the transmission. Today, that list seems to be unending. The throttle body on the Caliber is a compact unit (Figure 1). It houses the electronic throttle-control (ETC) motor, throttle plate, sensors and circuitry. It is fairly costly as well – almost$200.

In the June edition of Transmission Tech/Talk, we did an article about another throttle-body issue concerning a Nissan Maxima with an RE0F09A CVT. In that particular vehicle, the problem was due merely to a carbon buildup on the throttle plate. Once the plate was cleaned, the vehicle worked well. That was not the case for the Caliber.

Before replacing any component, it is always better to go through a test procedure to not only verify the integrity of the part but also actually fix the problem and be spared needless cost.

Today, having access to technical-information sites such as ALLDATA or Mitchell on Demand is imperative, in order to view things such as electrical schematics (Figure 2). These schematics or drawings are the road maps to success, while not having access makes life much harder.

Having the correct schematic makes it much easier to “zero in” on the areas of concern and not chase ghosts. The illustration in Figure 2 shows the wire color and connector locations of the PCM, APP sensor and throttle body. With this information, a particular circuit can be tested or isolated if necessary.

In addition to electrical schematics, the technical sites may also have a section to display the code meanings or possible causes (Figure 3).

The chart in Figure 3 shows not only some possible causes but also the specific circuit numbers involved; i.e., K124, K126. That information can then be applied to the schematic.

The key is that when a customer brings in a vehicle with a condition that appears to be transmission related, donʼt jump to conclusions. Know the transmission, know the complaint and know where to find the road map.

The race among the OEMs to add more gears (speeds) has accelerated to epic proportions, especially over the past decade and a half. Eight-, nine-and even 10-speeds (allegedly) either are on the road today or soon will be. Currently, the big numbers in use are six-speed transmissions, which are produced by a variety of companies.

Several shops have already been exposed to the ZF 6HP family of transmissions, including the Ford version 6R60, as well as the home-grown GM 6L80 models, which are rear-wheel-drive. The GM and Ford joint-venture 6T70/6F50 front-wheel-drive six-speeds are also making an appearance in certain areas. The Chrysler 62TE is a carryover 41TE.

In Asia, the three main transmission producers are Aisin, Honda and Jatco. Aisin has produced several models of six speeds, both front-wheel-drive and rearwheel-drive, such as the TF80 and A761E family of units. With all of the four-and five-speed transmissions that Honda has produced, the company finally launched a six-speed as well. Jatco, on the other hand, has been focusing a lot on CVTs for companies like Nissan and Subaru. Beyond the emphasis of CVTs, Jatco has been busy producing step-type transmissions including a seven-speed rear-wheel-drive.

The Jatco JF613E (aka F6AJA, W6AJA, RE6F01A) is the companyʼs first front-wheel-drive six-speed. This transmission was launched in late 2006 and is used by Nissan (of course) and Renault here and overseas. Another company to use the JF613E is Mitsubishi. Jatco is now providing transmissions to Mitsubishi because of the transmission division being sold to Jatco. The 2007-and-up Mitsubishi Outlander and 2008-and-up Lancer both use the Jatco six-speed.

The JF613E is a rather unusual-design transmission. At first glance, from an operational standpoint, the JF613E appears to function like the GM 6T70. Both units have five friction elements, a one-way clutch (OWC) and three planetary gear sets. Even some clutch-pack designations are the same. A power-flow chart is also fairly close between the two models.

Like many other front-wheel-drive six-speed transmissions, the JF613E has no bottom pan, which means no quickie filter change or valve-body drop. It has a valve-body side cover instead (Figure 4). The bellhousing does split from the case and there is an end cover as well. Two-wheel and four-wheel versions are available. The bellhousing is the first item to pop during disassembly.

Once the bellhousing is removed, the pump assembly is accessible. Although the pump body and cover are of somewhat an odd shape, the assembly is basically a GE rotor design. There are not a lot of valves to deal with either (Figure 5).

The first clutch pack in the unit is directly behind the pump. The name of the clutch is 3-5/reverse, which coincidentally is exactly when it is applied, as in the 6T70. The drum has a regular piston but a bonded retainer. Clutch stack-up is normal. The shaft part of the drum splines to the rear ring gear. The clutch hub meshes with the front and center sun gears.

Directly next to the 3-5/reverse drum is the low-clutch drum. Although it is called a low clutch, it is applied from first to fourth gear, similar to the 6T70 1-2-3-4 brake. As with the 3-5/reverse-clutch assembly, the low clutch has a regular piston with removable seals but a bonded retainer. Frictions and steels are also normal. What is unique is that both drums spline together to form one assembly (Figure 6). The low-clutch frictions spline to the front ring gear.

The last clutch-drum assembly is all the way at the other end of the transmission and is supported by the end cover. The name of the part is the high clutch. This clutch pack is applied in fourth, fifth and sixth gears, again as in the 6T70. Like the other two clutches, the high-clutch piston is metal, the retainer is bonded and the clutches are a regular design (Figure 7).

The other two clutch packs are stationary brakes, both of which mesh the steels with the case. The first brake is the low/reverse, which is splined to the inner race of the low roller clutch. The center planet also splines to the low-roller inner race. The next brake is the 2-6 brake (guess when it applies). The 2-6 brake meshes with the center (rear) sun gear. Both frictions and steels are regular double-sided (Figure 8).

The JF613E, like the 6T70, has three planetary gear sets, but with a few wrinkles. One design variation is that the JF613E has a Lepelletier planet set. The 6T70 does not.

The first planet set to cover is the last one in the lineup – the back of the bus, so to speak. The rear planet is the Lepelletier design, which means that the sun gear is anchored, in this case to the end cover. The planet carrier is splined to the input shaft (Figure 9). The rear planet also splines to the high-clutch drum, as stated previously, and the rear ring gear splines to the 3-5/reverse drum.

The planet set at the front of the transmission is referred to as, believe it or not, the front planet. A unique feature of this planet set is that beyond the regular sun gear is another sun gear, which splines to the end of the shaft and is part of the center planet set. The hub that is made to the sun gear meshes with the 3-5/reverse clutch (Figure 10). The front ring gear is the low-clutch hub. The front planet splines to the center ring gear.

The third and final planet set is the center planet position and is what ultimately drives the output gear. The center planetary set is definitely uncommon. The planet carrier is a simple planet design but has two sun gears, like a compound planet set (Figure 11). The center (front) sun gear splines to the actual front sun gear, and the center (rear) sun gear is held by the 2-6 clutch. The center ring gear has notches to mate with the drive lugs of the output gear.

So much for basic planetaries.

The one-way clutch in the JF613E is a roller-clutch design (Figure 12). Unlike the big push in the U.S. toward mechanical diodes, Jatco decided that a traditional roller would do just fine. The roller clutch holds (applies) in first gear as in most transmissions, with the inner race meshed with the center (output) planet and the outer race anchored to the case.

The only way to get to the filter is to disassemble the transmission, at least the front end of it. The filter bolts directly to the pump, which is the case with an increasing number of models. Another deviation with the JF613E is that it uses a bolt-on cooler (Figure 13). The jury is still out as to which cooler design is best, radiator or transmission bolt-on.

The valve body is pretty basic, with one small exception: eight (count ʼem) eight solenoids. There are six linears and two on-off. In addition are five pressure switches. What connects to all of this is a case connector and a lot of spaghetti (Figure 14). Diagnostic procedures will conform to other transmission models.

Itʼs all about volume and being able to deal with it.