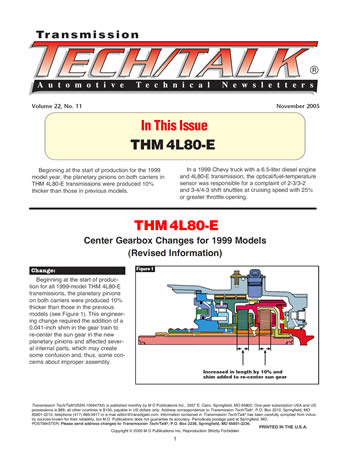 Beginning at the start of production for the 1999 model year, the planetary pinions on both carriers in THM 4L80-E transmissions were produced 10%thicker than those in previous models.

In a 1999 Chevy truck with a 6.5-liter diesel engine and 4L80-E transmission, the optical/fuel-temperature sensor was responsible for a complaint of 2-3/3-2 and 3-4/4-3 shift shuttles at cruising speed with 25%or greater throttle opening.

Beginning at the start of production for all 1999-model THM 4L80-E transmissions, the planetary pinions on both carriers were produced 10%thicker than those in the previous models (see Figure 1). This engineer-ing change required the addition of a 0.041-inch shim in the gear train to re-center the sun gear in the new planetary pinions and affected several internal parts, which may create some confusion and, thus, some concerns about improper assembly.

Part 1. Planetary pinion gears – Were increased in length by about 0.075 inch in both front and rear carriers, as shown in Figure 1, for increased durability.

Part 2. Added 0.041-inch shim — A 0.041-inch shim was added between the thrust bearing and the rear internal ring gear, as shown in Figure 2, to re-center the sun gear in the revised planetary pinion gears.

Part 3. Center support — Required a 0.041-inch recess to be machined into the bearing surface to accommodate the re-centering of the sun gear in the revised planetary pinion gears, as shown in Figure 3.

Special note: Sometime in 2000 GM eliminated the only visual identification (recess) from the updated center support, and it now requires measurement for identification, as shown in Figure 3.

However, when all pieces listed above are used as a service package, they can be used to back-service “center-lube” model 4L80-E transmissions.

Special note: Figure 8 illustrates some examples of improper assembly, with some dimensional checks to prevent this from happening to you.

A 1999 Chevy truck with a 6.5-liter diesel engine and 4L80-E transmission came in with a complaint of 2-3/3-2 and 3-4/4-3 shift shuttles at cruising speed with 25% or greater throttle opening. No codes were stored, and a diagnostic check of the accelerator-pedal position sensor (APPS) showed no faults.

The optical/fuel-temperature sensor (see Figure 9) was the cause of the complaint. This sensor is responsible for fuel metering and injector-pump timing. Its signal is compared with the one from the crankshaft-position sensor for diagnostic purposes.

A quick and easy way to see whether this sensor is causing the complaint is to simply unplug it and see whether the shift-shuttle condition goes away. If it does, replace the optical/fuel-temperature sensor, which is on top of the injector pump (see Figure 10).

Note: The engine will be difficult to start, but once it’s running you will be able to perform the road test with the sensor disconnected.