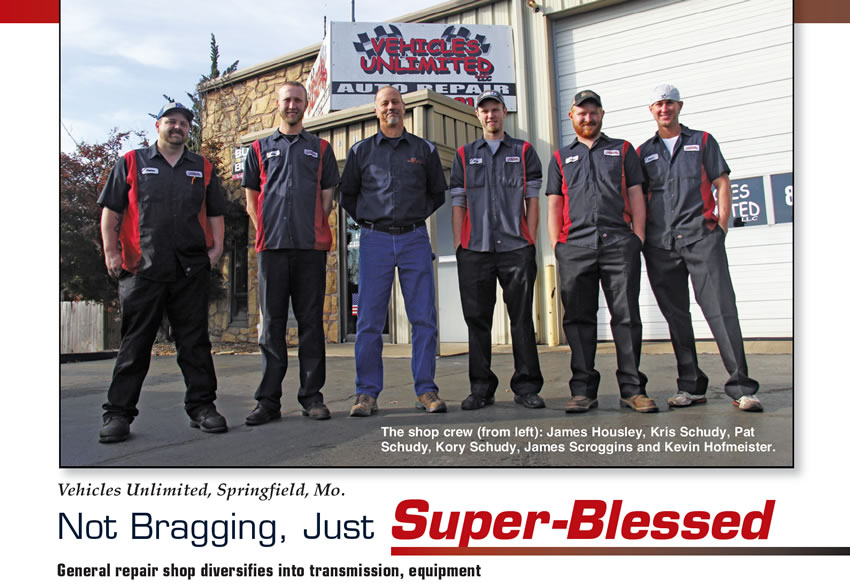 After the first few years, Vehicles Unlimited took off and just kept flying.

“I advertised for the first three years in a flyer that was free in your mailbox, a Christian deal, but we started being overwhelmed with business,” owner Pat Schudy said. “Our parking lot’s full 24/7. We are very fortunate to be as busy as we are. I get a lot of calls from radio and TV stations wanting me to advertise. I get to brag on ourselves: We’re too busy. I almost feel like I’m throwing money away by advertising. I’m not bragging; we’re just super-blessed.”

Pat runs an equipment distribution business as well as the repair shop both under the Vehicles Unlimited name. He credits his two sons’ ability to run the shop for freeing up Pat to pursue the equipment business. Kris works as the service writer and general-repair technician, and Kory is the shop foreman and diagnostician.

Pat had been seeking the accomplished transmission rebuilder Kevin Hofmeister for the Vehicles Unlimited team. The rebuilder joined the crew in 2014 with the request that Pat construct teardown and rebuilding benches for him.

Most of the transmission work is rebuilding, and the process is complete with electronics, hard parts that may be reused and all soft parts replaced, Pat said. The intent is to fix the immediate problem and problems down the road.

A small percentage are units that have already been removed from the vehicle, a practice that Kevin discourages because he has no control over the shop of origination.

The rebuilding aspect is due to the dedicated work of Kevin, a self-driven worker.

“Mostly Kevin pulls the tranny himself, rebuilds it and puts it back in the car, test-drives it and makes sure it’s 100% good, comes up and gets another ticket and does another one,” Pat said. “What is so cool is this back room was designated for Kevin and me in the equipment business, but he has two lifts pretty much tied up all the time with tranny jobs. Sometimes he’ll have them both out, both on a bench, which is totally amazing to me because there’s a bazillion parts of two transmissions torn apart, and he knows where they go. So, he’s a genius.”

The transmission aspect includes a relationship with Jasper Engines and Transmissions in which Jasper sends a replacement unit to Vehicles Unlimited whenever a Jasper customer has trouble in southwest Missouri. Kevin typically completes three transmission projects per week, but he has done as many as six.

Pat recalls a remarkable story about a customer’s loyalty. It’s about a motorist who services vending machines such as quarter bubble-gum machines. His route from Springfield to Tulsa spans a 200-mile-wide territory. Returning to his vehicle after a stop, he discovered the transmission would not go into gear. He paid a $400 tow bill back to Springfield because he wanted no one but Kevin to work on his transmission.

“That’s how much my guys are awesome,” Pat said.

The facility is nearly 10,000 square feet after three additions and a 65-foot extension of the lot. There’s no more space to develop, and the shop keeps humming with business.

Vehicles Unlimited started as a brake shop with some general repair, and they added AC and heater repair, and front-end work. Of late, the shop has been busy selling tires, and they have made state inspections available in an effort to be a one-stop shop.

“My oldest son (Kris) helped me build the business in the early years with his specialty in front-end work and alignments. He soon became the face of Vehicles Unlimited because of his excellent customer relations,” Pat said.

“My youngest son (Kory) is excellent at all electronics in cars. He can do anything on a GM, Ford, Chrysler, but he’s a GM-trained tech. We reflash computers now.”

They don’t do engine building, but they do head swaps, motor swaps and head-gasket repair. Due to the outlay for copious diagnostic equipment, the shop passes on some imports.

The shop services seven fleets, which helped the business stay afloat in the early years of the business. Fleets include plumbing, heating, restaurant repair and scale weight calibration.

But there’s more: “My pride and joy is the fact that we have a lot of churches trust us with their church buses. I’m very honored that we get a lot of those,” he said. As a result, they have customers from churches in a radius of 50 miles or more.

Pat enjoys working on vintage vehicles, and the family enjoys racing cars as well as working on performance vehicles.

Pat said he’s often asked what his secret is for success. The answer is simple.

“We don’t charge an unfair amount. We try to treat our customers the way we want to be treated.”

Before Pat got into the automotive repair business, he worked for a big-box retailer, traveling around to stand up new stores and hire crew members with various specialties. This experience prepared Pat to seize the opportunity to get into equipment distribution. He distributes Challenger lifts, CEMB alignment and tire machines, Robinair A/C carts and Jenny power washers. Many of his clients are automotive repair shops, and he has accounts for southwest Missouri with a mega-retailer and a large parts-store network.

“Since I own my own shop, it’s given me and my team the ability to be a great resource for a guy putting a shop together. We know what product to buy,” he said. “We know how to help these places.” Two equipment technicians, Eric Vaughn and Steve Eidson, have been instrumental in growing this business and providing excellent customer service.

Pat’s grandmother said, “Take care of what’s on your plate, and don’t worry about what’s in front of that guy.”

For Pat, that means he’s not a competitor for anybody else. With millions of cars on the road, there should be plenty of business for everyone.

Meanwhile, the Schudys grapple with the choice of relocating to a larger space or living within their bounds.

“It’s a spooky step to go bigger, but customers want us to get bigger,” Pat said. Obviously this business is for my family. I treasure that and value that greatly. I don’t want to make a decision and go the wrong way in trying to build it too quick.”

The family will take more time to weigh this decision.