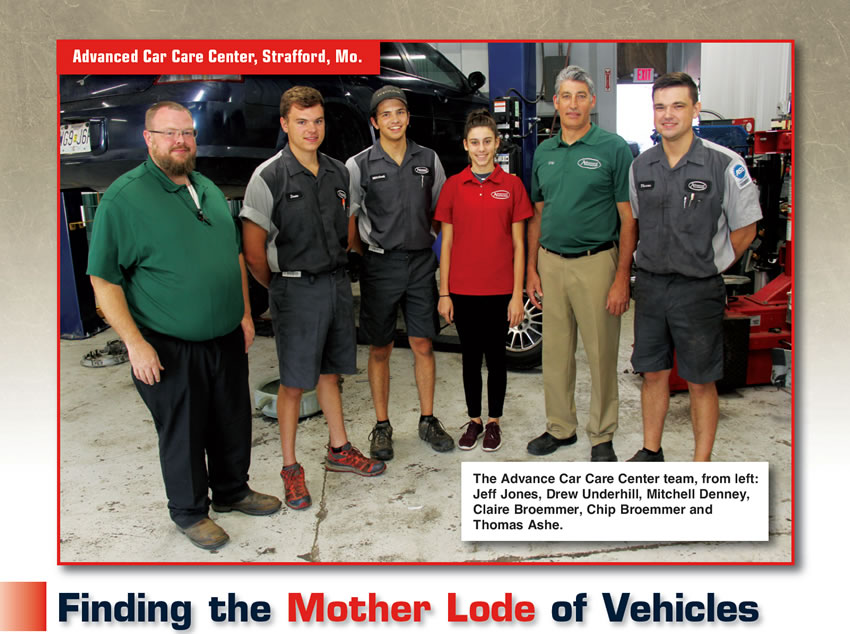 Chip Broemmer’s career educating the next generation of technicians has been sandwiched between two hitches in automotive repair, a long early span with Toyota and a recent venture, Advanced Car Care Center in Strafford, Mo.

Finding the Mother Lode of Vehicles

‘The Biggest Plus for Us is Being Right on This Road’

Chip Broemmer’s career educating the next generation of technicians has been sandwiched between two hitches in automotive repair, a long early span with Toyota and a recent venture, Advanced Car Care Center in Strafford, Mo.

The shop has worked out rather well in terms of location and the way the business has developed, he said.

Strafford is a small but growing community where he finds a great deal of his customers, and it’s close to the metro area of Springfield, which has a large population of vehicles.

The shop is on a stretch of roadway lined with contractors running fleets of trucks and vans and, just a few miles down the way, is the entrance to a huge industrial park packed with companies that move freight on pavement. The road is designated Old Route 66, aka the Mother Road, but for Chip, it could be called the Mother Lode of Vehicles.

“The biggest plus for us is being right on this road,” he said.

But that’s not all. Chip worked for 13 years as an instructor at Ozarks Technical Community College in Springfield. That’s where he found his three techs and the service writer, and that’s how he understands the upbringing of young professionals in an increasingly demanding field. He sees opportunities for expansion, and he’d like to add another tech.

“This is a strong team environment,” Chip said. “We’re pretty selective about who we add to that team. It has to be an individual who’s going to fit and shares the mission of this company: to deliver value for our repairs.”

The techs are Thomas Ashe, Drew Underhill and Mitchell Denney, plus Chip, a master tech. Jeff Jones is the service writer. The Broemmer family is very invested in the business. Chip’s wife, Megan, works part-time as bookkeeper. Chip’s twin daughters, Claire and Mackenzie, are working in the summer on alternating days as assistants to Jeff.

From niche to all-around

Chip’s original idea for the shop was to specialize in a few import transmissions, and he chose a building that had three-phase electricity to accommodate a dynamometer for testing rebuilt units. However, he needed a way to move more volume of work through the shop. They were rebuilding transmissions, which required 3-5 days on the lift, as did tearing down engines. They moved into R&R transmission work.

“It was an efficiency issue with how we use our bays,” he said.

Chip also took on general repairs and tire sales. The turnaround time for vehicles became just one day or less.

Responding to the demand from contractors, Advanced Car Care Center became a one-stop shop for maintenance and repair of fleets, which has become 30-40% of the shop’s work. Many of the vehicles are F-350 and F-450 models for lawn care, delivery trucks and vans, and church buses. The biggest lift at the shop is 14,000 lbs., so it can handle the buses and trucks, but the shop does not service school buses or dump trucks.

Tires are part of the one-stop demand for contractors and a plus for retail customers. While expanding into tire sales, Chip had no need for inventory. “That’s the beautiful thing: All of these tire distributors are in the industrial park or have same-day delivery. So we’re three miles from every major tire distributor here,” he said.

The technicians find themselves frequently diagnosing electrical problems, which can take varying paths through a vehicle. They must decide whether the problem calls for an R&R or a fix from the outside, such as a solenoid or speed sensor. “Once we determine it’s major mechanical, then it’s going to get a reman unit,” Chip said.

The state of the work force

At Advanced Car Care Center, employees have a benefit package including a matching retirement program, tools provided, paid uniforms, and paid-for training online and hands-on. Chip also has instilled a sense of professionalism that includes the policies of the business and more prestige for the technician.

Chip recommends a formal mentorship program for entry-level techs and a licensing program similar to that of Canada’s. The province of Ontario, he said, requires 6,500 hours of hands-on apprenticeship and 720 hours of school for a license. Why? Because the automobile has become an increasingly complex machine, with new safety systems, high-level electronics and intricate transmissions.

“I believe that I have some very talented people working for me. I think it’s time for the job description to get more respect, and I think it does from a lot of our customers.

“There’s still this idea in the public that I can take my car anywhere and I can get a ‘box of car repair’ off the shelf, and it doesn’t matter who made the box of car repair – they’re all the same. But we all know that’s not true. More and more customers are recognizing that this is not true. So I feel that the job description is slowly but surely gaining the respect of a lot of our customers anyway.

“I talk to a lot of guys who say, ‘I can’t find anybody.’ Well, what are you doing to help a kid down that path? What are you doing to foster their growth into this really technical environment? We expect magically these employees to drop out of the sky, and it’s just not going to happen. …

Chip wants to cultivate relationships with companies in the industrial park. That would require an expansion. The options:

In any case, Chip is pleased with the progress so far, especially with the evolution of the shop into general repair.

“We’ve been blessed and led into some of these areas,” he said. “The location we wound up in for that three-phase, but it turned out it was a great location. And the employees we have and the team we built has been a blessing. The growth of the business itself is a blessing. I’m really happy the way things are turning out.”