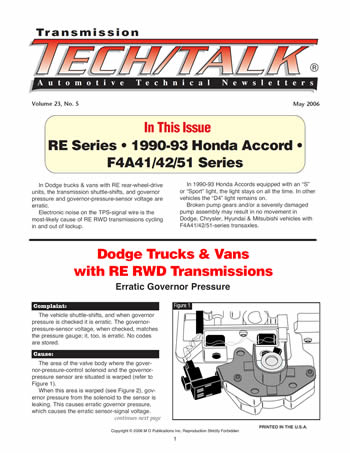 In Dodge trucks & vans with RE rear-wheel-drive units, the transmission shuttle-shifts, and governor pressure and governor-pressure-sensor voltage are erratic.

Electronic noise on the TPS-signal wire is the most-likely cause of RE RWD transmissions cycling in and out of lockup.

In 1990-93 Honda Accords equipped with an “S” or “Sport” light, the light stays on all the time. In other vehicles the “D4” light remains on.

Broken pump gears and/or a severely damaged pump assembly may result in no movement in Dodge, Chrysler, Hyundai & Mitsubishi vehicles with F4A41/42/51-series transaxles.

The vehicle shuttle-shifts, and when governor pressure is checked it is erratic. The governor-pressure-sensor voltage, when checked, matches the pressure gauge; it, too, is erratic. No codes are stored.

Vehicles with the RE RWD transmissions cycling in and out of lockup.

Possibly noise on the TPS-signal wire.

To build an L-C “pi” filter you will need the following:

You can obtain Jameco parts at http://jameco.com, or your local professional electronic-parts store.)

Solder the parts together as shown in the schematic in Figure 4 and the illustration in Figure 5.

Install the filter by cutting the TPS-signal wire and feeding that signal through the blue wire in the filter (the 1-µF side to the TPS and the 4,700-µF side to the computer), then ground the black ground wire to a good ground (the better the ground, the cleaner the signal) as shown in Figure 6.

In vehicles equipped with an “S” or “Sport” light, that light stays on all the time. In other vehicles the “D4” light remains on all the time. Codes cannot be retrieved. Vehicle is stuck in third gear except when shifter is in manual 2 or manual 1 position; then, vehicle is in second gear.

One cause of this problem is a bad computer. A specific logic circuit has fried because of other problems in the power-supply section of the computer.

The repair for this particular problem is fairly easy to do. No proprietary parts are required, so you can find all of them at your local electronics store. The repair requires only moderate soldering and board-repair skills. There are five parts to replace, one jumper and one bridge to install, and two trace cuts to make.

Vehicles equipped with the F4A41/42/51-series transaxle may exhibit a no-move condition. The fluid level may read high, and fluid condition is described as good.

When the filter is cut open, there is a 3- to 4-inch section of filter media that is not crimped along the edge of filter halves during assembly. This allows the broken wave spring to enter the pump assembly (see Figure 13).

Replace pump and filter. Some aftermarket filters have been found to have no problems with the filter-media assembly. Update the low/reverse spiral cushion wave spring to a one-piece circular wave spring.

One other issue that plagues this transmission is front-seal leakage and/or a damaged pump bushing after rebuild, within as little as a few minutes during road test or in a couple of days. The original pump assembly is aligned during manufacturing, and there are no leading edges or alignment pins to align the pump. An alignment tool is available from Sonnax, part number #41005-TL (see Figure 14).

With the alignment tool in place as shown in Figure 15, torque the pump bolts to 80-85 lb.-in.

Do not try to align the pump with the torque converter. This procedure, when attempted, has had disastrous results.

The only alternative method of aligning the pump without the tool is to assemble the pump body and cover with the bolts finger tight. Place the pump in the rear case half with the transfer gear removed (see Figure 16).

Bolt the front case half onto the rear case. Then, from the back of the rear case, with a 3/8-inch extension, swivel adapter and #30 Torx bit, tighten the pump bolts (see Figure 17). Remove the pump from the case and torque to the specifications listed above. This procedure should be considered only as a last resort if the alignment tool is not available at the time of assembly.