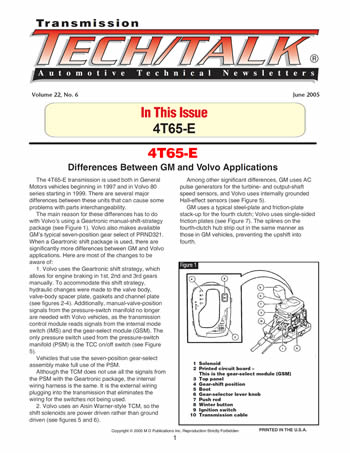 The 4T65-E transmission is used both in General Motors vehicles beginning in 1997 and in Volvo 80 series starting in 1999. There are several major differences between these units that can cause some problems with parts interchangeability.

The 4T65-E transmission is used both in General Motors vehicles beginning in 1997 and in Volvo 80 series starting in 1999. There are several major differences between these units that can cause some problems with parts interchangeability.

The main reason for these differences has to do with Volvo’s using a Geartronic manual-shift-strategy package (see Figure 1). Volvo also makes available GM’s typical seven-position gear select of PRND321. When a Geartronic shift package is used, there are significantly more differences between GM and Volvo applications. Here are most of the changes to be aware of:

Vehicles that use the seven-position gear-select assembly make full use of the PSM.

Although the TCM does not use all the signals from the PSM with the Geartronic package, the internal wiring harness is the same. It is the external wiring plugging into the transmission that eliminates the wiring for the switches not being used.

Change 2: Volvo uses an Aisin Warner-style TCM, so the shift solenoids are power driven rather than ground driven (see figures 5 and 6).

GM uses a typical steel-plate and friction-plate stack-up for the fourth clutch; Volvo uses single-sided friction plates (see Figure 7). The splines on the fourth-clutch hub strip out in the same manner as those in GM vehicles, preventing the upshift into fourth.

In the MAN position a signal indicating the lever position is generated for the GSM as follows:

For each of the three gear-selector positions, a Hall-effect sensor is mounted on the printed circuit board for the GSM.
A permanent magnet on the lever affects the output signals from the sensors to the control module.
The control module can read off the position of the lever through the differences in the signal characteristics.

The housing, shift-lock solenoid (item 1 in Figure 1) and mounting lever for the ignition-switch interlock cable are common to both gear-selector assemblies.

Information is transferred between the gear-selector module and the transmission module using serial communication, which requires a microprocessor on the printed circuit board.

The TCM gives instructions to the GSM about which LEDs should be illuminated and to what strength of illumination. In addition, the TCM controls the solenoid connection at the reverse inhibitor.

The gear selector module is connected to the transmission diagnostic system.

The transmission is electronically controlled by the TCM, which controls it on the basis of signals from the network and sensor in the transmission.

The TCM has built-in diagnostics, read via the data-link connector using VADIS.

When the vehicle is being driven at normal acceleration, the TCM uses a preset shifting program, optimized to shift for fuel economy. This shifting program is suitable for “normal” driving, providing earlier upshifts and lockup. In addition the transmission oil pressure is adjusted to provide smooth gear engagement.

In sport mode, the shift points are adjusted to optimize performance. Downshifts occur earlier. The TCM selects the shifting and lockup points that provide the best possible performance. The transmission switches from economy mode to sport mode in step 1 or step 2 if the accelerator pedal is pressed down quickly. The conditions are that the throttle opens and the vehicle speed exceeds 50 km/h. As soon as the accelerator pedal is released to a certain level, economy mode resumes.

At wide-open throttle (WOT) the kick-down function is engaged, providing quick downshifts for maximum performance. In this way the driver can obtain a burst of power for overtaking another vehicle, for example.

The driver selects the winter mode with the W button on the top panel of the gear-selector assembly. Winter mode enables starting off in a high gear to prevent the wheels from spinning on a slippery surface. This mode also can be used in other difficult situations in which the driver needs more-direct control over gear selection. Lockup can be engaged in 1st and 2nd gears. The shifting pattern is optimized to minimize the number of shifts. Depending on the gear position, the following combinations can be obtained:

Emergency programs in the event of a fault

If the TCM detects a transmission fault (permanent fault), it activates an emergency program to deal with the fault. The control system then implements corrective action to protect the transmission while leaving the car in the best possible drivable condition. Minor malfunctions do not activate an emergency program. There are different programs depending on the type of fault:

Emergency mode I is activated in the event of minor faults, and the Limp-home mode is activated for the most-serious faults. If the malfunction is intermittent, the TCM returns to normal operation the next time the ignition is switched on.

Note! When starting off and driving, the driver should first move the gear selector to position L to minimize stress on the transmission.

If the TCM detects a permanent fault, it activates an emergency mode. The TCM then implements corrective action to protect the transmission, while leaving the car in the best possible drivable condition. Minor malfunctions do not activate an emergency program. There are different programs depending on the type of fault:

Emergency mode is activated for minor faults and the limp-home mode for the most-serious faults. If the malfunction is intermittent, the TCM returns to normal operation the next time the ignition is switched on.

A text message is displayed in the combined instrument panel for diagnostic trouble codes (DTCs) stored in the TCM. The transmission shifts in all gears but transmits no signal to the lockup solenoid. This means that lockup is not available.

A text message is displayed in the combined instrument panel for DTCs stored in the TCM. The TCM interrupts the activation of all solenoids. This means that no shifting is possible. The transmission functions in only 3rd gear and backup (reverse) gear. There is no regulation of line-pressure solenoid STH, and there is maximum system pressure constantly, which results in harsh meshing and harsher shifts during engagement from P-R, N-R and N-D. This also can result in a whining noise from the transmission pump.

A counter for transmission oil quality is built into the software for the TCM. The counter tracks the amount of time the oil is above a certain temperature. When the counter has reached the maximum value, the DTC for an oil change is stored in the control module. When you replace transmission fluid, you must reset the counter to prevent a DTC from being stored incorrectly. This applies anytime the transmission fluid is replaced either at scheduled intervals or during a repair.

The reset function is activated via the VIDA vehicle communication socket.

These are some of the more-significant differences that can be found between GM and Volvo applications. Different-size passenger-side axle seals are another, and Volvo also uses a viscous clutch in the differential in some applications.