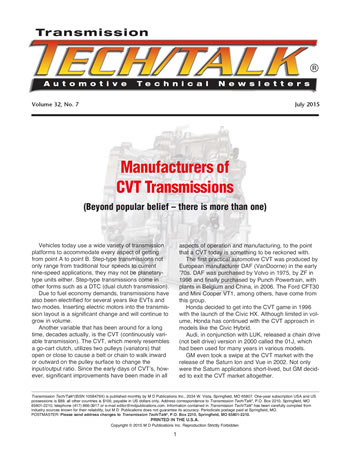 In This Issue
Manufacturers of CVT Transmissions

Due to fuel economy demands, transmissions have also been electrified for several years like EVTs and two modes. Inserting electric motors into the transmission layout is a significant change and will continue to grow in volume.

Another variable that has been around for a long time, decades actually, is the CVT (continuously variable transmission). The CVT, which merely resembles a go-cart clutch, utilizes two pulleys (variators) that open or close to cause a belt or chain to walk inward or outward on the pulley surface to change the input/output ratio. Since the early days of CVTʼs, however, significant improvements have been made in all aspects of operation and manufacturing, to the point that a CVT today is something to be reckoned with.

The first practical automotive CVT was produced by European manufacturer DAF (VanDoorne) in the early ʼ70s. DAF was purchased by Volvo in 1975, by ZF in 1998 and finally purchased by Punch Powertrain, with plants in Belgium and China, in 2006. The Ford CFT30 and Mini Cooper VT1, among others, have come from this group.

Honda decided to get into the CVT game in 1996 with the launch of the Civic HX. Although limited in volume, Honda has continued with the CVT approach in models like the Civic Hybrid.

Audi, in conjunction with LUK, released a chain drive (not belt drive) version in 2000 called the 01J, which had been used for many years in various models.

The turn of the century saw the emergence of what was to become the king of CVT production, Jatco. Jatco, in conjunction with Nissan, started to navigate over to a CVT vehicle platform for many of the Nissan vehicle applications. The release of the RE0F09A (JF010E) brought to the market a CVT that could handle some weight and horsepower, in the form of the Nissan Murano 3.5L engine.

Over the years Jatco has developed several CVT models ranging from RE0F06A/RE0F21A to RE0F09A/RE0F10A types. More recently, Jatco has developed newer designs, such as the CVT7 (JF015E), which has an auxiliary gearbox that makes it a step-type CVT, kind of. The CVT8 line, consisting of the JF016E and JF017E, has many more improvements over various models. The CVT8 hybrid (JF018E) has an electric motor incorporated into the bell-housing area for improved fuel economy. Beyond the transverse applications is an in-line model used by Subaru called the Lineartronic, which is a monster.

What of the other Asian transmission power-house?

When it comes to electric transmissions, Aisin owns that segment, starting with the Toyota Prius P110/P112 to the Ford Escape Hybrid P310/HD-10 models. Aisin, however, was not well known in the United States for CVT models, but that is changing.

Overseas, Aisin has launched a series of CVT applications for Toyota vehicles as well as other companies. Following are some of the CVT models on the street today:

The K411, among others, will start to show up in shops for repair. Externally, the unit looks like many other Toyota-type transmissions (Figure 1). The unit consists of a bell housing, case, end cover and bottom pan and uses a torque converter. There is also an externally mounted oil cooler and start-stop auxiliary pump. There is a small plug next to the electrical connector in which to add fluid. There is no dipstick.

The bottom pan uses a stand pipe like other Aisin models for fluid level checking (Figure 2). Remove the bottom plug and add fluid till it runs out of the hole.

The filter is a metal/plastic type that uses Dacron material (Figure 3). It is held in place by three bolts and is produced by Filtran. The outlet neck uses an O-ring.

The electrical case connector is held in with a bolt from the out-side (Figure 5). The harness wires and electrical plugs are color-coded, but have no correlation to the solenoid connectors, so make sure to note their position before removal. The harness also has the TFT sensor incorporated into it.

The forward clutch is one of two clutch packs that are in the K411, similar to most CVTʼs. Unlike other CVTʼs though, the input sun gear is part of the drum (Figure 7). The input shaft is also made to the drum. The friction plates are the segmented (button) design and the clutch pack uses a tanged cushion plate. The piston is aluminum.

The reverse brake is the other clutch assembly and fits into the case (Figure 8). The reverse frictions are also the segmented type and there is a tanged cushion plate as well. The piston is aluminum with removable seals like the forward clutch.

The drive pulley is supported by a ball bearing at both ends. The piston seal housing has a reluctor on the O.D. (Figure 10). With the nut and bearing out of the way, the seal housing can be removed, with a little effort, to expose the pulley seal. Ensure the housing I.D. is smooth so that the new seal is not damaged.

The driven pulley is a little more involved than the drive pulley. First remove the shaft nut that has left handed threads. Then press off the pinion drive gear and sleeve. Apply some heat to the seal retainer; however, use caution due to the heavy apply spring under it (Figure 11). Inspect the seal surface for roughness and the reluctor for damage. Also check the belt surfaces for wear.

The push belt is a typical design and must be installed in the right direction. There is a rotation arrow to denote the direction (Figure 12). Always attach nylon straps to the belt before removal or it will be in pieces.

The valve body is rather basic for a CVT, no ratio control motor, etc. The valve arrangement is typical. There are five solenoids, two simple on-off, which are the same part number, and three linear solenoids (Figure 14). One linear solenoid has a larger spool housing than the other two. The two linears that have the same diameter spool housing can be interchanged, so note the connector color before removal.

The common linear solenoids that can be switched have a blue or black connector and are of a different design (Figure 15). The calibration will be different between them as well as the physical difference.

Unlike earlier Aisin CVT models, the K411 provides start-stop capability, via the use of an auxiliary pump assembly (Figure 16). The pump is attached externally to a support plate that bolts to the side of the case. When the engine shuts off, the pump starts, to keep the CVT clutches applied.