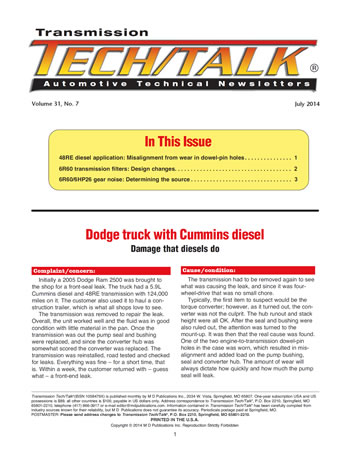 Initially a 2005 Dodge Ram 2500 was brought to the shop for a front-seal leak. The truck had a 5.9L Cummins diesel and 48RE transmission with 124,000 miles on it. The customer also used it to haul a construction trailer, which is what all shops love to see.

The transmission had to be removed again to see what was causing the leak, and since it was four-wheel-drive that was no small chore.

Typically, the first item to suspect would be the torque converter; however, as it turned out, the converter was not the culprit. The hub runout and stack height were all OK. After the seal and bushing were also ruled out, the attention was turned to the mount-up. It was then that the real cause was found. One of the two engine-to-transmission dowel-pin holes in the case was worn, which resulted in mis-alignment and added load on the pump bushing, seal and converter hub. The amount of wear will always dictate how quickly and how much the pump seal will leak.

Itʼs no secret the amount of stress that diesel engines can inflict upon various components. Back when, GM diesels would rip the mounting lugs off torque converters or tear up other driveline items. Over a period of time, however, fatigue can cause subtle wear such as dowel-pin or dowel-pin-hole wear (Figure 2).

To enable Dodge to use a Cummins diesel engine, an extra component had to be added beyond what a gas engine requires, which is an adapter plate. The use of an adapter plate creates more wear potential, which is now showing up on 5.9L and 6.7L diesel applications. Special attention needs to be paid to possible wear areas on these models.

Another issue that may surface during replacement of a broken adapter plate is an engine-oil leak. Unlike most engines that use plugs or caps to seal items like the camshaft at the back of the engine, the Cummins diesel camshaft bore is open. What seals the camshaft bore is a lathe-cut seal that compresses between the engine block and adapter plate. If the replacement adapter is minus the seal, an engine-oil leak will occur (Figure 3). Ensure that the seal is in place. The part number for the seal is 5086757AA if purchased separately.

Hopefully in the future, there wonʼt be more examples of the damage that diesels do.

All transmissions that have been in operation for more than three months will start to get component facelifts of one type or another. Certain modifications are for valid reasons, such as to increase capacity or remedy a deficient design, while others are more frivolous.

Key items that qualify for potential change could include hard parts or electrical components, but filters? Whatʼs up with that? Regardless of the transmission, there are legitimate reasons for different filter styles, such as a regular two-wheel-drive (shallow pan) application or four-wheel-drive (deep pan) version, for people who like driving over a cliff. Things do get carried away, though, such as with the 4L60-E. At least a couple of the newer numbers did retrofit. AX4S and AX4N transmission filters, on the other hand, made even less sense. A short orange seal, long orange seal and green seal design to differentiate a minor variation in pan depth just created confusion.

When ZF launched the 6HP26 in 2002, a different approach was taken. For some unexplained reason, ZF chose to integrate the filter with a plastic pan. Although that design made OE production easier, transmission service was a different matter. Servicing the 6HP26 means replacing the whole pan/filter assembly, along with some “special” fluid, which results in a fairly pricey job.

Ford did use the 6HP26 for a short time in the Navigator but chose to produce its own version of the transmission, the 6R60 family. At least Ford took a more-traditional approach concerning the filter and pan, which makes servicing and rebuilding a bit easier. As is customary, though, things started to mutate, which means the aftermarket now has more to deal with.

The first Ford-produced 6R60 filter, made by Filtran, was a pretty basic filter (Figure 4). The filter fits not only 2006-up shallow-pan 6R60 models but also a ZF version of the 6HP26, the 6HP26X. This filter was used for only a short time, though, by Ford.

By 2007, another filter was released to address a deep-pan design. Not only was the filter modified to accommodate an extended inlet tube, as is customary for four-wheel-drive applications, but the overall size of the filter was also increased (Figure 5). The extended inlet tube is about 1.5 inches long. The filter neck seal is a ribbed design on both the
shallow and deep filter versions.

One would think that should be sufficient to handle all models of 6R60, 6R75 and 6R80 transmissions, but no cigar. By 2011, another variation was released and is considered a shallow-version design. The upper (plastic) section of the filter is the same as a deep pan design. The lower (metal) section is where the difference is. The inlet is shorter (about 1 inch) than the deep-pan filter (Figure 6). Talk about splitting hairs, itʼs almost like the AX4S/AX4N scenario.

Moving right along to 2014 involves a couple of new wrinkles. The first variation concerns the Ford Transit van, which is now outfitted with a 6R80 transmission. Apparently, the existing filter numbers couldnʼt cut it, so here comes one more. Again, the top section (plastic) is the same as the others. Itʼs the bottom metal section that is different, mainly around the inlet area. Who knows why the filter in Figure 6 wouldnʼt work. In the end the filter needs to match the pan depth.

The other filter to review, at least for now, has to do with fuel economy. Vehicles equipped with start/stop technology are using a 6R80 partial hybrid, meaning that there is an auxiliary-pump setup similar to the one in the 4L60-E PHT (partial-hybrid transmission). Unlike the Transit filter, the bottom metal section of the hybrid is the same as the shallow-pan design in Figure 6. Itʼs the upper plastic section that is unique, due to a secondary outlet to accommodate the auxiliary pump (Figure 7). In addition, the filter neck seal is an O-ring, not a ribbed seal like the others. The secondary outlet contains a check-valve assembly.

Will there ever be “one fits all”? Probably not, but thereʼs always hope.

A customer arrived at the shop with a 2007 Ford Explorer equipped with a 4.6L engine and 6R60 transmission. He was concerned about a noise that had existed for some time and was evident most of the time during operation. The vehicle had 94,000 miles and had never been serviced.

The vehicle was taken on a test drive to see exactly when the noise occurred. Although the noise was there most of the time, the pitch did change under certain conditions, such as being in neutral or switching gears, like going into sixth gear.

Once it was determined that the noise was internal, the pan was removed to check for wear and then the unit was removed. Upon inspection, a thrust bearing in the rear-planet sun-gear-to-sun-gear location was found to be slightly pitted; therefore, it was replaced and the unit was reinstalled. The road test, however, did not go as expected. The noise was still there. After closer review of the symptom and inspection of other components, for the second time, it was a front planetary that turned out to be the culprit. A planet pin had started to pit where the needle bearings rode.

Most automatic-transmission planetary gear sets have specific modes of operation (neutral, direct drive, overdrive, underdrive and reverse), depending on whatʼs being driven or held.

The 6R60/6HP26 transmission series uses a Lepelletier planetary design for the planetary setup. That means the front sun gear is anchored and the planet is driven around it by the ring gear, at all times; no direct drive (1-1). In this instance, the sun gear is splined to the back of the stator support (Figure 8). The rear planet in this case is a traditional Ravigneaux (compound) type, which is driven by the front planet. The rear planet, unlike the front, is locked up (1-1) in third gear, which would be an indication that the sun-gear bearing was not the cause of the noise. The noise occurred in all forward gears.

The front planet is splined to the A-clutch drum, which is the drum next to the pump (Figure 9). The front ring gear is part of the input-shaft/E-clutch-drum assembly.

Separating the front planet from the A-clutch drum can be a chore and could cause damage if not done correctly, resulting in noise or failure later on. Once the clutches have been removed, there is a snap ring at the center of the planet and drum that must be pushed inward, in order to split the two pieces (Figure 10). Upon reassembly, ensure that the drum and planet carrier are straight and positioned correctly to avoid any issues.

Knowing when components are applied is the key to any diagnosis, as in this case. On the initial road test the only time the noise was not present was in gear, sitting still. As soon as the vehicle started to move the noise started as well but would change pitch in different gears. Sixth gear was different from the rest because although the front planet was rotating, there was no load. In first through fourth gears the front planet drives the A clutch, and in third and fifth gears the planet drives the B clutch. In sixth gear the E clutch is the driving member (Figure 11).

There is one more wrinkle to deal with concerning this type of noise problem, which has to do with certain models of BMW. On the Ford Explorer, there was no noise in gear, sitting still, which would eliminate the pump as a noise source. Some models of BMW have a declutching or decoupling computer strategy that allows the A clutch to partially slip standing still, which would enable the front planet to rotate and make noise. Now the pump could become suspect, incorrectly. Reverse gear, however, could be a different story.

Before starting to wrench, know the system, to determine “which item is talking.”