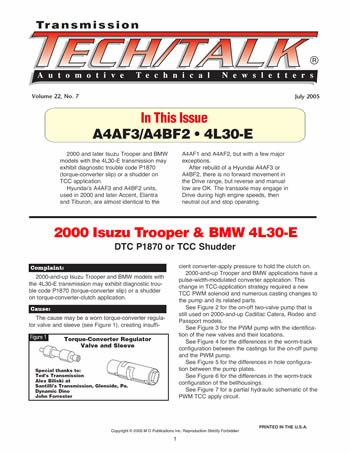 2000 and later Isuzu Trooper and BMW models with the 4L30-E transmission may exhibit diagnostic trouble code P1870 (torque-converter slip) or a shudder on TCC application.

Hyundai’s A4AF3 and A4BF2 units, used in 2000 and later Accent, Elantra and Tiburon, are almost identical to the A4AF1 and A4AF2, but with a few major exceptions.

After rebuild of a Hyundai A4AF3 or A4BF2, there is no forward movement in the Drive range, but reverse and manual low are OK. The transaxle may engage in Drive during high engine speeds, then neutral out and stop operating.

The cause may be a worn torque-converter regulator valve and sleeve (see Figure 1), creating insufficient converter-apply pressure to hold the clutch on.

2000-and-up Trooper and BMW applications have a pulse-width-modulated converter application. This change in TCC-application strategy required a new TCC PWM solenoid and numerous casting changes to the pump and its related parts.

See Figure 2 for the on-off two-valve pump that is still used on 2000-and-up Cadillac Catera, Rodeo and Passport models.

See Figure 3 for the PWM pump with the identification of the new valves and their locations.

See Figure 4 for the differences in the worm-track configuration between the castings for the on-off pump and the PWM pump.

See Figure 5 for the differences in hole configuration between the pump plates.

See Figure 6 for the differences in the worm-track configuration of the bellhousings.

See Figure 7 for a partial hydraulic schematic of the PWM TCC apply circuit.

Since model year 2000 Hyundai has been using new transaxles in the Accent, Elantra and Tiburon: the A4AF3 for use with 1.5-liter engines, and the A4BF2 for use with 2.0L engines. These transaxles are almost identical to the A4AF1 and A4AF2, but with a few major exceptions. The A4AF1 and A4AF2, as well as the new A4AF3 and A4BF2, are almost identical to the KM series except that they are “back-ward.”

The big change is the addition of two solenoids (see Figure 8 for solenoid locations and wire colors), a handful of valves and an accumulator for the forward (rear) clutch.

The other new solenoid is shift-control solenoid C (SCSV-C). When the transaxle is in first or second gear, pressure to the servo-apply side is controlled by PCSA, as it always has been. For third and fourth gears SCSC causes full line pressure to remain on the apply side of the servo all the time, including during the shift. This gives PCSB far greater control over the timing of direct-clutch application. This should take care of 2-3 flares, 4-3 bumps, delayed reverse engagement and other timing issues related to the direct clutch.

The new valves are only to support the new solenoid scheme. They are the failsafe valve, the control-switch valve and the high/low-pressure valve. The checkballs remain the same as in other KM-style units.

With the addition of the new solenoids come changes to the diagnostic trouble codes. Although not as generalized as a code P1750 (solenoid-pack fault), the new codes do not specify whether a solenoid circuit is open or shorted. It does specify the solenoid, though. P0760 indicates a fault in the SCSC circuit, and P0765 is for the PCSB. Both will cause illumination of the malfunction indicator lamp (MIL) and a failsafe condition.

The pin on the diagnostic connector used to retrieve codes manually with an analog voltmeter now is pin 1 (see Figure 10).

In addition to the code changes, changes also were made to the pin-outs to accommodate the two new wires. The case connector now has six pins (see Figure 11).

The computer appears identical to a fourth-generation KM computer, but the pin assignments have changed (see Figure 12).

One other note: The A4AF3 and A4BF2 still have creep mode, but there is no longer a separate switch to control it. The computer now controls creep mode, using the TPS and VSS inputs. Further, the typical TPS signal now is routed into the ECM, and the ECM sends a pulse-width-modulated signal that increases with throttle opening to the TCM.

There is a no-forward condition in the Drive range after rebuild; reverse and manual low are OK. The transaxle may engage in Drive during high engine speeds, then neutral out and stop operating.

Figure 14 demonstrates the oil flow and the position of pressure-control valve B when the solenoids are in the right locations, allowing oil flow to the rear (forward) clutch drum.

The partial oil schematic in Figure 15 explains why there will be no movement in the Drive range when the solenoids are in the wrong locations.

Notice that when the PCSV-A solenoid is placed in the location of the PCSV-B, in the Drive range the normal firing order of the solenoids will be incorrect. The PCV-B position will cut off oil flow to the forward drum, causing no forward movement in the Drive detent. There may not be any movement when engine speed is increased. Manual low and reverse will be OK.