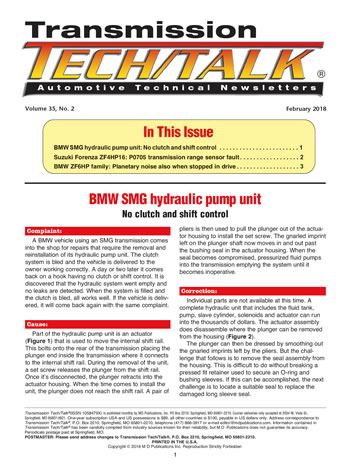 A BMW vehicle using an SMG transmission comes into the shop for repairs that require the removal and reinstallation of its hydraulic pump unit. The clutch system is bled and the vehicle is delivered to the owner working correctly. A day or two later it comes back on a hook having no clutch or shift control. It is discovered that the hydraulic system went empty and no leaks are detected. When the system is filled and the clutch is bled, all works well. If the vehicle is delivered, it will come back again with the same complaint.

When the time comes to install the unit, the plunger does not reach the shift rail. A pair of pliers is then used to pull the plunger out of the actuator housing to install the set screw. The gnarled imprint left on the plunger shaft now moves in and out past the bushing seal in the actuator housing. When the seal becomes compromised, pressurized fluid pumps into the transmission emptying the system until it becomes inoperative.

Individual parts are not available at this time. A complete hydraulic unit that includes the fluid tank, pump, slave cylinder, solenoids and actuator can run into the thousands of dollars. The actuator assembly does disassemble where the plunger can be removed from the housing (Figure 2).

The plunger can then be dressed by smoothing out the gnarled imprints left by the pliers. But the challenge that follows is to remove the seal assembly from the housing. This is difficult to do without breaking a pressed fit retainer used to secure an O-ring and bushing sleeves. If this can be accomplished, the next challenge is to locate a suitable seal to replace the damaged long sleeve seal.

Suzuki Forenza models equipped with the ZF4HP16 may have a complaint of a recurring P0705 diagnostic trouble code related to a fault with the transmission range sensor also called the park neutral switch. It may be noted that along with this code there may be third-gear starts. In addition, there have been many complaints of an issue with the shifter being loose in the gate. This can also be connected to a complaint of not being able to release the ignition key when selecting the park position.

To correct this condition:

Some 2005 and up BMW vehicles equipped with the ZF6HP family of transmissions may have a complaint of planetary noise, after overhaul, especially when stopped in the drive position.

This causes a problem with the planetary being slightly offset, which creates the gear noise. This typically happens when the technician slams the A clutch drum against the floor repeatedly to remove the planetary. The reason this noise can also be heard in drive at a stop is because 2005-up models are capable of “decoupling,” which means that the A clutch is only partially applied at a stop; when the computer strategy requirements are met, the turbine shaft will begin to rotate. See the partial oil circuit diagram in Figure 7.

To correct this condition, refer to Figure 8 and, using a 90° scribe, push the snap ring inward in the areas shown to release it from the tabs in the A clutch drum. Replace the planetary or drum as needed if damaged.