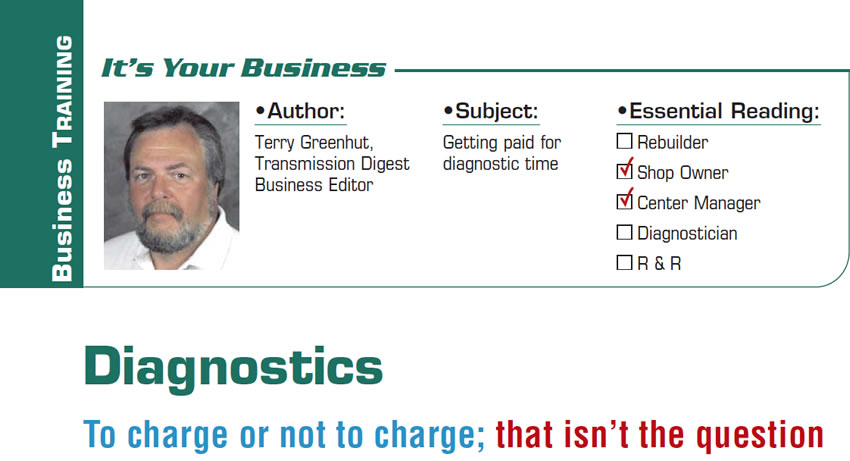 Pretty much every online forum lately has had the question come up as to whether charging for diagnostics is appropriate and/or good business practice. There are many opinions from which to choose. The bottom line, however, is that it’s your business so you need to pick one or several methods to be applied in varied circumstances that will keep your customers happy and at the same time allow you to make the money you require.

Pretty much every online forum lately has had the question come up as to whether charging for diagnostics is appropriate and/or good business practice. There are many opinions from which to choose. The bottom line, however, is that it’s your business so you need to pick one or several methods to be applied in varied circumstances that will keep your customers happy and at the same time allow you to make the money you require.

I don’t believe in absolutes – rules of doing business that force you to do the same thing in the same situation every time. I think we need to be flexible in dealing with our customers as long as we are getting the results we want – unlike the sign I saw this morning in a new-car dealer’s service department that read: “There will be a $105 diagnostic fee added to all repair jobs. No exceptions.” Kind of cold and scary, don’t you think? The poor customer walks up to the counter and before anyone has even said “Howdy” to him he’s been told that he will have to spend $105, and he doesn’t even know for what.

The customer at this point has no idea whether the problem is minor or major – which in itself is scary – but now is told it will cost at least $105 to find out. If the problem is found what will that cost? Even worse, if the problem isn’t found right away, what will it cost to delve further into it? Then, of course, knowing how people think, the customer will likely be saying to himself or herself, “If it’s a really small thing I’m paying more for the diagnosis than for the cure, or if it’s something huge I’m putting up all this money and I don’t even know if it’s worth fixing or if I want to fix it.” These are some of the issues customers mull over when they have a problem that isn’t immediately obvious and needs to be diagnosed.

Why is it people can understand that the bulk of the money doctors receive is for diagnosis? The cure in most cases is a prescription for a drug of some kind. When it comes to their cars they don’t want to pay until after the problem is found and fixed. Even then they are upset by the diagnostic fee that appears on the repair order.

There are several reasons why we run into this wall. One is that customers have no idea how difficult it is to diagnose problems with their cars. They still think of a car as if it were a 1950s or ’60s Chevy or Ford that had hardly anything under the hood. They were relatively easy to diagnose. They would still fool you sometimes, but in general you could find out why they didn’t run right within a really short time. Today’s cars are super-complicated but customers don’t know that. In fact, they might think it’s easier to diagnose and repair them because they are so sophisticated. Sure, all you have to do is plug in a scan tool; it will tell you exactly what’s wrong and how to fix it. They watched too much “Star Trek” back in the ’80s.

Another is that we haven’t marketed the difficulty level to our customers. In general we are not the world’s best educators. We don’t take enough time and effort in training our customers so they can understand what we need to fix their cars. We also do not possess the very recognizable sheepskin that has “Doctor of something” on it. The only bit of advertising that tells customers how qualified we are is a patch, a certificate of achievement and maybe a little sign from ASE.

Don’t get me wrong; ASE does a fine job in testing and certification, but without a sizable advertising budget how could they possibly get their message across to the 250 million drivers in the U.S. alone. It’s a shame; we are like the Rodney Dangerfields of the business world. We get “no respect” either, and we never will until the motoring public understands how difficult it really is to diagnose and repair a car properly and how good we have to be to do it right. But how will they ever find out? It would take a huge advertising initiative from entities with much deeper pockets than ours to make a difference.

Now, don’t feel too bad about the fact that customers don’t want to pay you for diagnosis. They don’t want to pay the doctor whom they just finished begging to find a cure for whatever is hurting them, either. The only thing that makes it more palatable and keeps them from calling around for a diagnostic price before they go in is that they are paying only a very small percentage of the charge, usually about $10-$15 for the co-pay. The health insurance is picking up the rest. If it weren’t for that they would be calling and saying, “My stomach hurts; how much to fix it?”

So, here’s the deal. We are stuck with a bad situation. We want to charge for diagnosis but we know a couple of things; one is that customers don’t want to pay for it, and two is that telling them about it up front scares them away. Now if everyone charged for it that wouldn’t be the case, but not everyone does, so if the customer wants to call around a bit he or she will likely find someone to do it for free.

Now, you might say, “Well, if the customer is that cheap I don’t want him anyway.” That would be the ideal if we were truly that much in control of our customers, but be honest; we aren’t. We can’t turn down customers because we think they are going to be cheapskates; they have to prove it to us first, which means they would have to get at least a couple of chances. Then if you can’t make any money dealing with them, kick them to the curb and get new ones. You don’t need the practice working on someone’s car; you need the profit.

Here are some helpful hints:

You should view selling diagnostics as just another step in the sales process. It may be a bit more difficult because the customer won’t see any immediate gain, but you can sell it as a money-saving step that will keep them from spending unnecessarily for parts or services they don’t need. You can do a great job of selling diagnostics if you take the time and devote the energy to doing it right.

Advertisement
In this article:Diagnostic, Its Your Business

Diagnostics: To charge or not to charge; that isn’t the question