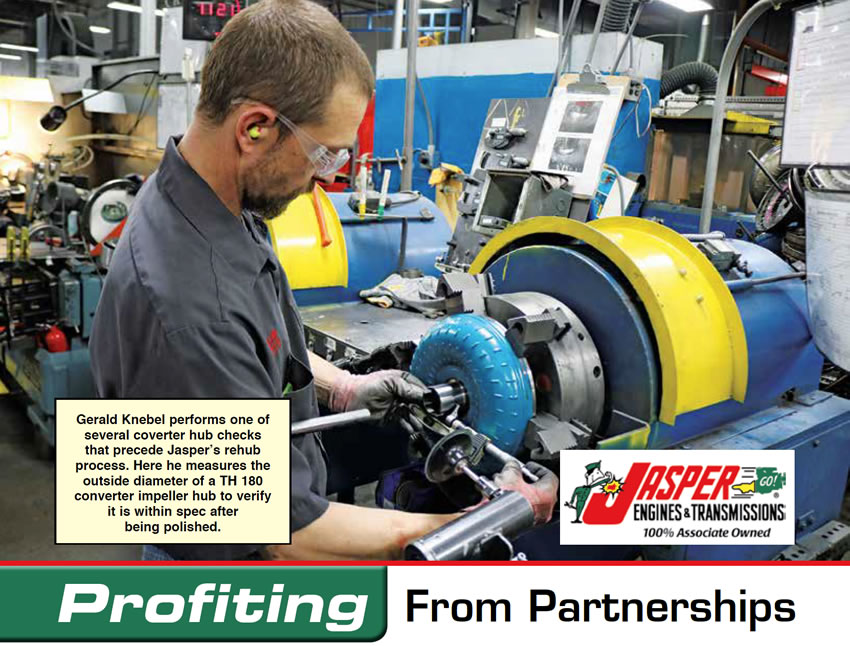 “There’s a lot of business to be done out there and what we are focused on is truly being a partner with the shops. We want to be their Company of Choice for those difficult units that they choose not to rebuild whether it’s a question of technology, training, or even time. We can provide those units.

“We feel it’s a great thing to be partnered with professional transmission shops and independent garages,” said Jasper Engines and Transmissions’ John Schroeder, who serves as vice-president of drivetrain manufacturing for the company. “The relationships we’ve developed with those shops have greatly evolved and changed over the years from one of being in competition with each other to one of partnering to take care of that shop’s needs, and ultimately the needs of their customers. We strive to make it a win-win-win relationship.”

“There’s a lot of business to be done out there and what we are focused on is truly being a partner with the shops. We want to be their Company of Choice for those difficult units that they choose not to rebuild whether it’s a question of technology, training, or even time. We can provide those units. And, when a JASPER® unit is installed, in nearly all applications; there’s an automatic, three-year/100,000 mile nation-wide warranty that is attached to that job. We strongly feel that how we go to market is what differentiates us from the competition. Whether it’s our Outside Sales team, Inside Sales, Customer Service, Technical Support or Delivery Team, JASPER is part of the solution from start to finish. You’re not just ordering a unit when dealing with us, you are entering a partnership to solve a customer problem, and we’re with you every step of the way.”

In fact, JASPER has a program that puts board chairman Doug Bawel in front of shop owners for a series of meetings in local markets. The Creating a Culture of Excellence program gives shop owners decision-making tools to use while they consider whether a given unit should be built on the bench or acquired from JASPER as a reman unit.

Bawel described the program he’s been holding throughout the country saying, “We’re working with independent shop owners on how to improve their business. We’re making sure that those owners realize that it’s the car dealer that is the real competitor.

“We start by giving industry updates and then give specific JASPER updates. We share our sales program with the guys. For example, gas engines are coming in for replacement with a bell curve pattern at around ten years of vehicle age; transmissions are at about seven years.

And, we share with shop owners the sales closing rate – one in three for transmissions. To increase the closing rate, a shop may want to look at how they’re preparing their quotation. And, we know that if JASPER has a new unit available before OE then we’ll have a 40-50% closing rate. That’s the type of information we are sharing with these shop owners.

We talk about why dealerships have become so aggressive in the marketplace. If we go back 15 years , 65% of the work they did in a car dealership was warranty work. Today, it’s 25% or less. If you’re a European or Asian import dealership you’re under 20%; you’ll have a zone manager camping out in your office trying to figure out why you’re taking advantage of the warranty. Because of that, they’ve become very aggressively involved in the aftermarket repair marketplace.”

During a recent meeting with JASPER’s top suppliers, Bawel went on to describe the marketplace and how it is changing: “Omnicraft,” explained Bawel, “is the first new brand that Ford Motor Company has come out with in more than 50 years. It was announced in January of 2017. Today there are more than 2,000 non-Ford parts under the Omnicraft brand. They’re focused on having up to 8,000 parts by the year 2025. What they know is that if they begin doing work on that vehicle that they will be two-to-three-times more likely to sell the owner a new vehicle.

With services like On-Star, they’re pinging the vehicle even if the owner isn’t paying for it. A little old lady, Mary Lou, gets a notice that her Buick has 60,000 miles on it and hasn’t been back to the dealer or had any updates on it for the past 18 months. She doesn’t know any better, so she’s taking that car back to the dealer. Those are the types of things that are happening that put pressure on the independent shop owner.

“It’s also important to explore the ways a shop can differentiate its business from others. We know that most people pick an independent repair shop within three miles of where they live or on the traffic pattern that they use going to work, etc. So, we look at what the shop can do; not just advertising so much as strategic marketing. We talk about having newsletters or programs for schools where the teachers can drop their cars off in the morning and get a ride to and from the school, and the vehicle will be ready at the end of the school day.

“And we discuss some of what we know about marketing to customers using electronics. We had four people at the Creating a Culture of Excellence meeting last night that are adopting the use of tablets in their shops. The average repair order increases between 20% and 30% when you capture the customer’s information on the tablet and communicate about additional services, via text or email, with that vehicle owner. The car is already there, and the owners are quite likely to say go ahead and do that too.”

Bawel said, JASPER is an employee-owned company that currently has 3,300 associates of which nearly 2,500 are vested shareholders. From the standpoint of volume, the company averages 313 remanufactured transmissions per day, 238 gasoline engines, 21 diesel engines, and 40 differentials.

In recent years JASPER has increased its business, particularly in the area of fleet supply. The company acquired heavy-duty remanufacturer, Weller Truck Parts. In 2008, the company acquired a business that served as a launching pad for the Jasper Innovative Solutions Program that distributes OEM and aftermarket new parts to fleet service facilities. Recently, JASPER acquired Diesel USA Group, a supplier of air and fuel components.

Doug’s brother, Zach Bawel is the company’s president. He explained that demand for remanufactured transmissions has seen a shift in the past couple of years from mostly four-speeds to a rapidly-growing call for six-speed units. “As we look at the six-speeds we’re really coming into that market now. Three years ago we were selling maybe three of the 6L80/90 a day. This year we’re at 40 a day and, by the end of the year, we expect to be at something like 45 a day. In future years, we look for those to be a 70 – 80 unit a day product for us.”

Schroeder goes on to explain that that in the ever-changing marketplace, customers often want what they want now. “The units need to be in place to be available for quick delivery. We now maintain higher levels of remanufactured transmission inventories than ever before. All of our branches – we currently operate 47 across the country – are receiving trucks with inventory from JASPER reman plants either four or five days a week. To even better serve our customers, we’re building a facility in Lubbock, Texas and planning to open a new branch in California and another in the Florida Panhandle.

“As a final product benefit, once a shop has installed one of our units, we support that unit anywhere in the U. S. We have a nationwide network of preferred installer shops throughout the country that we’d like the car owner to use if there is an issue. That said, the great benefit of the JASPER warranty is that the vehicle is not required to return to the original installation shop to take care of any follow-upwork that might arise.”

Summarizing the case for partnering between transmission shops and JASPER, Zach Bawel said, “Our opportunities come when we can provide something not everybody else can offer. Smaller transmission shops still account for 80% of the transmission repairs. But, the rapid change in technology is proving to be an overload. Thinking of the electronic controls, the TCMs and such, that come with the eight and ten-speed units it’s easy to see why. Those of us who are investing in the R&D and product development will be capturing more and more of that market.

“And, another important factor to be considered is the average age of the transmission technician. Without many younger technicians coming into that market, those shops are going to have to get a reman unit and will become, more and more often, replacers instead of rebuilders of those units.”
“I think the build and buy blend is something that is going to continue,” concluded Doug Bawel. “Yesterday afternoon, we met with some people from Ohio State University and the technical schools in the state of Ohio. Our aftermarket needs to get teachers and parents to realize that today’s automobiles have more computers onboard than a Mercury spaceship. We need to get kids interested in being involved in the aftermarket. If we look back ten years, JASPER had three engineers; today we have 35.

“We have to have these very technical people so we can figure out how to make our product better and how we can we salvage parts that help contain the cost of a reman unit. There are parts we salvage today that we didn’t think were possible just a few years ago.

“We know the shop that installs JASPER transmissions will be profitable in doing so. Furthermore, that shop is an excellent prospect to install our engines as well. Look at what’s happened in shops throughout the country. Transmission shops and even more often, body shops now, are often engaged in general automotive repair work. The independent garage is seeing less, and less of that contracted out work from body shops that have evolved to take on that general mechanic work in addition to the specialty work they have always performed.

“If you read Transmission Digest, a fairly reputable source,” Doug said grinning, “you’ll find that there are two transmissions replaced for every engine. JASPER is building our business with those shops to become more and more a preferred source for units.”

Advertisement
In this article:Jasper Engines Transmissions

Features: The effects of supply chain holdup on the transmission industry