Habby’s Transmissions started as a radiator shop. When Warren Frie bought it in 1975 (keeping the name Habby’s from the previous owner), it took until the mid-1980s until he saw an opportunity in the transmission repair market, and transformed the business.

“Then, when I was 19,” says Warren Frie Jr., the current owner, “I graduated high school and went right into business with my dad and started to grow the business. I started to implement stuff that he had never done before and doubled the business. And then a few years later, my younger brother Wayne joined and got into the transmission building side.”

In addition to Warren and Wayne, Habby’s has three rebuilders, four installers and two drivers that pick up and deliver cars.

Habby’s is located in Hicksville, New York, on Long Island, about an hour’s drive from Manhattan. Hicksville has a population of about 41,000 according to the latest Census data.

Warren says the shop prides itself on high-quality equipment.

“We do most of our business with Transtar Industries,” Warren notes. “We have all of our own programming software from a company called CAS where we can do all the programming on the Nissans, the GMs, Fords, the Chryslers. So we do all our own programming in house, which is a big investment that we made this year. We took on a lot of Allison transmissions recently, so we do Allison work now. We have portable lifts that we purchased that can lift up dump trucks and big tractors, so we do heavy truck work and bus work as well.”

Much of the work at Habby’s comes from fleets, and from wholesale business because, as Warren says, many repair shops in the area refer their customers to Habby’s. He estimates that 40% of their customers are retail, with the other 60% being split between wholesale and fleet.

“We service some of the biggest fleets on the island,” he notes. “We are one of the biggest privately owned shops in our area. We operate out of 14 bays. We have a rebuild facility, a fully air conditioned elevator to take the transmissions up—a state-of-the-art facility. And we do some big accounts. We do Delta Airlines, we do all the oil companies, big construction, electrical contractors. And it’s just a good family business that we’ve been growing through the years.”

Being in New York there will always be competition, but Warren says there’s less than there used to be.

“The competition is getting less and less because there are no young people getting into the industry. I mean, my brother and I are in our early forties and there aren’t a lot of young guys that are in the industry anymore. So these old-timers in their late sixties, early seventies are getting burnt out, retiring or just can’t keep up with the times.”

A focus on quality

Above, Warren mentioned that when he joined Habby’s, he started doing things his dad hadn’t been doing before to grow the business. He credits his time with a company called Management Success with helping him learn how to run and grow a business.

“It was a company that would just teach about running certain numbers, tracking certain things, accessing information from other shops all over the country. As a young kid, I wanted to add systems and take it to the next level. And I basically doubled the family business after a couple years of working with my dad.”

So what did they teach at Management Success?

“Just making sure you know what your bottom line is,” he answers. “Because if you’re giving a price out but don’t know what’s actually behind that number, it’s very easy to lose money. A lot of businesses today don’t really know what it costs to operate. So they’re busy, they look great, but are they slowly just suffocating on the back end? So it’s making sure that you know your cost or your price. Because this business is not about volume, it’s about quality. We’ve always would rather do less volume at better numbers than to just have all these time bombs on the road.”

Working with a lot of fleets, he notes, helps them keep this emphasis on quality going.

But in any case, no matter the type of customer, the emphasis on quality remains the same, Warren says.

“We don’t really talk about price because quality is more important than price any day,” he elaborates. “In my office on the wall it says ‘The bitterness of poor quality remains long after the happiness of a low price is forgotten.’ So we lead with value and service versus a cheap price.”

When asked what sets Habby’s apart from other shops, Warren says it’s all about the little things.

“So I feel like our thing is that we do the little things better. A lot of shops have gotten weeded out over the last five years because they just don’t keep up with the little things. These behind-the-scenes things we do separate us,” he says.

“We try to stay on top of current marketing in terms of having a good presence with our reputation on Google.”

“We want to have a cutting-edge shop so that the employees want to work here, in terms of lighting, heating, cooling and the most up-to-date electronics to be able to diagnose and program the cars,” Warren adds. “Making the shop look presentable when you drive past it, keeping the office clean, things like this.”

He credits this focus on image with much of the shop’s success with retail customers. But in terms of marketing, Warren notes that the best advertisement is a referral.

“My dad always taught me you never need to sell anything to somebody that something that they don’t need,” he says. “Because if you don’t do that and just do a good job with what they need, when they do have a problem, they’ll remember you.” 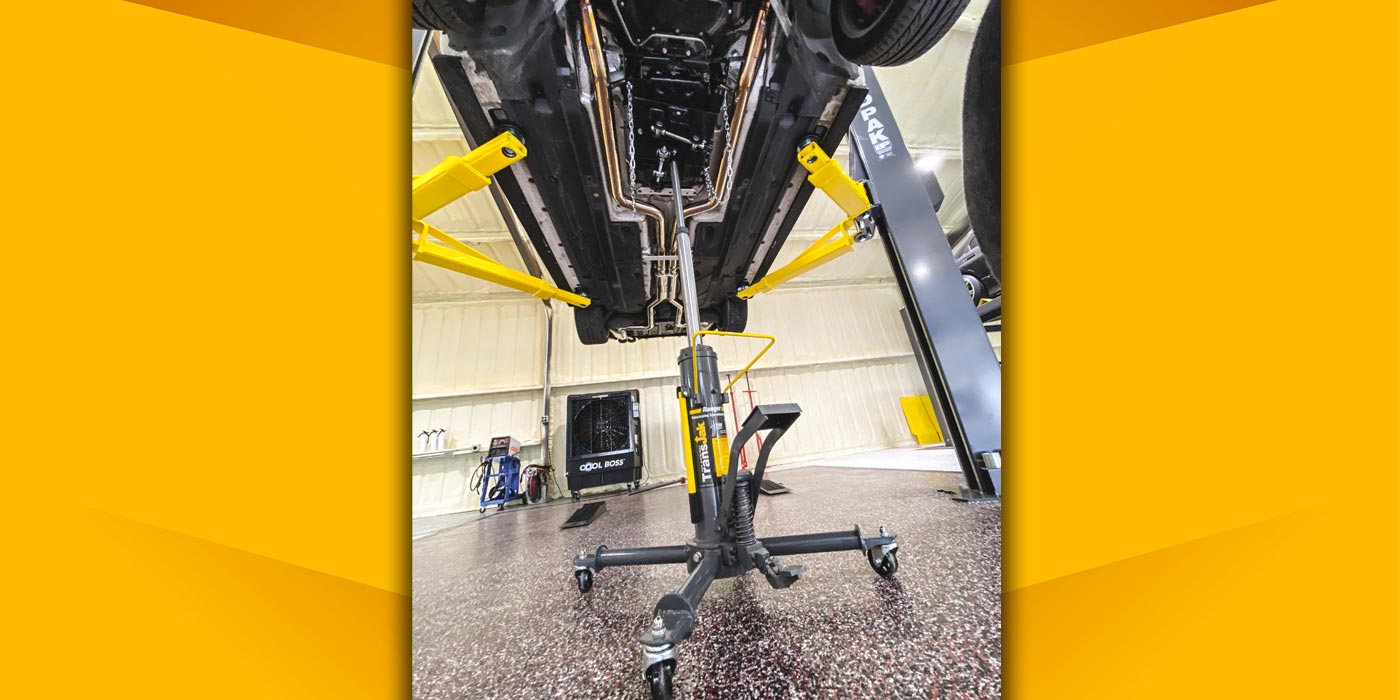 Tony Kuczynski may be on the executive side of the transmission industry these days, but having gotten his start as a technician, he has experience with both the business and the technical side of things. Related Articles – BendPak introduces new AP Series of two-post lifts – Counterfeit parts: Let the buyer beware – Shop

There is a Latin term handed down from English common law: “Caveat Emptor,” which means “let the buyer beware” of what is purchased. In this era when purchasing parts and other products online is becoming more common, that cautious approach to purchasing is of particular importance. Related Articles – From the ground up: Dunn Transmissions

His grandparents warned him that the transmission industry was a “tough business.” But Matt Fryar, who grew up around the business, ended up in it anyway. Related Articles – Shop profile: Small-town RAMM Transmission puts family first – Customer-focused approach: American Transmission specializes in automatics and customer service – Nominate your shop to be featured

The Road to AAPEX Ep. 3: You won’t believe who and what you’ll see on Route 66

It’s the stuff road trips are made of: the unexpected, the interesting and even the bizarre. They’re the roadside detours that are so intriguing you can’t help but pull the car over and soak it all in. Luckily, the 33-year-old Cadillac Brougham was running well. Babcox Media’s ASE-certified technician Joe Keene fixed it up with 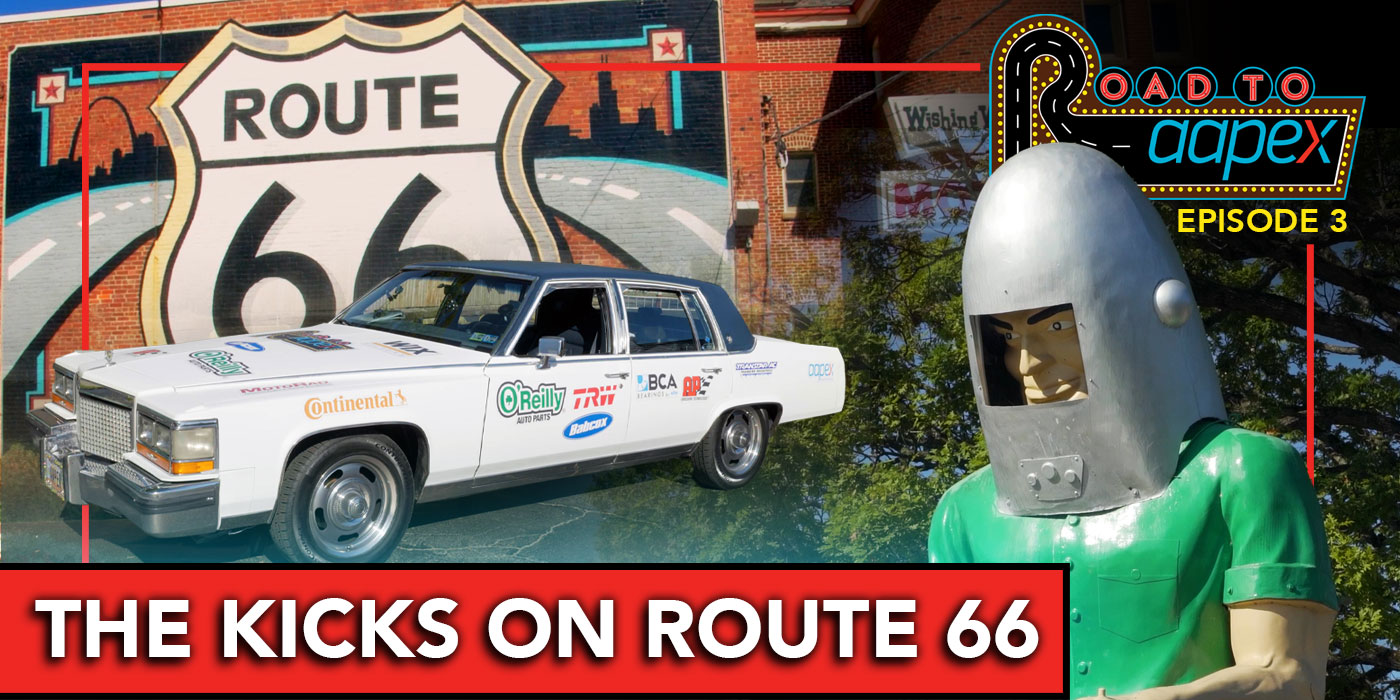