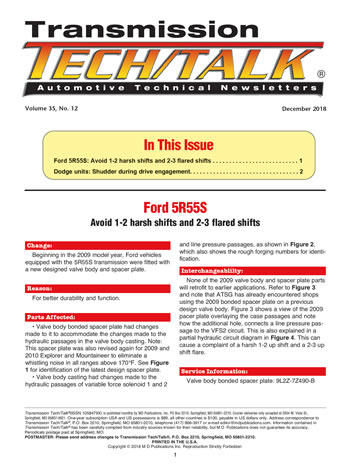 Beginning in the 2009 model year, Ford vehicles equipped with the 5R55S transmission were fitted with a new designed valve body and spacer plate.

For better durability and function.

Valve body bonded spacer plate had changes made to it to accommodate the changes made to the hydraulic passages in the valve body casting. Note: This spacer plate was also revised again for 2009 and 2010 Explorer and Mountaineer to eliminate a whistling noise in all ranges above 170°F. See Figure 1 for identification of the latest design spacer plate.

Valve body casting had changes made to the hydraulic passages of variable force solenoid 1 and 2 and line pressure passages, as shown in Figure 2, which also shows the rough forging numbers for identification.

None of the 2009 valve body and spacer plate parts will retrofit to earlier applications. Refer to Figure 3 and note that ATSG has already encountered shops using the 2009 bonded spacer plate on a previous design valve body.

Figure 3 shows a view of the 2009 pacer plate overlaying the case passages and note how the additional hole, connects a line pressure pas-sage to the VFS2 circuit. This is also explained in a partial hydraulic circuit diagram in Figure 4. This can cause a complaint of a harsh 1-2 up shift and a 2-3 up shift flare.

After overhaul, vehicles equipped with the 45/545/68RFE transmissions may exhibit a complaint of a delay or shuddering engagement into drive.

When this happens the CC regulator valve can move to the left, as shown in the oil circuit diagram in Figure 7, and open up an exhaust path for drive oil.

See Figure 8 for a view of the CC regulator valve in the proper position with the retainer in place for a comparison.

Note: the position of this valve can also cause a severe leak in the underdrive clutch causing a slip on takeoff.