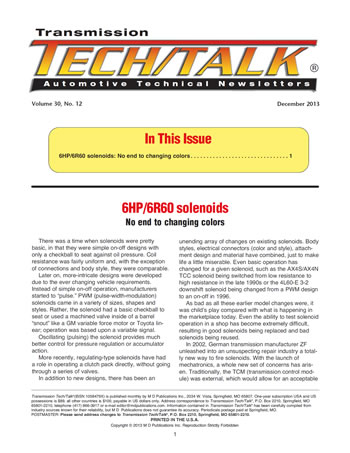 In This Issue
6HP/6R60 solenoids: No end to changing colors

There was a time when solenoids were pretty basic, in that they were simple on-off designs with only a checkball to seat against oil pressure. Coil resistance was fairly uniform and, with the exception of connections and body style, they were comparable.

Later on, more-intricate designs were developed due to the ever changing vehicle requirements. Instead of simple on-off operation, manufacturers started to “pulse.” PWM (pulse-width-modulation) solenoids came in a variety of sizes, shapes and styles. Rather, the solenoid had a basic checkball to seat or used a machined valve inside of a barrel “snout” like a GM variable force motor or Toyota linear; operation was based upon a variable signal.

More recently, regulating-type solenoids have had a role in operating a clutch pack directly, without going through a series of valves.

In addition to new designs, there has been an unending array of changes on existing solenoids. Body styles, electrical connectors (color and style), attachment design and material have combined, just to make life a little miserable. Even basic operation has changed for a given solenoid, such as the AX4S/AX4N TCC solenoid being switched from low resistance to high resistance in the late 1990s or the 4L60-E 3-2 downshift solenoid being changed from a PWM design to an on-off in 1996.

As bad as all these earlier model changes were, it was childʼs play compared with what is happening in the marketplace today. Even the ability to test solenoid operation in a shop has become extremely difficult, resulting in good solenoids being replaced and bad solenoids being reused.

In 2002, German transmission manufacturer ZF unleashed into an unsuspecting repair industry a totally new way to fire solenoids. With the launch of mechatronics, a whole new set of concerns has arisen. Traditionally, the TCM (transmission control module) was external, which would allow for an acceptable amount of transmission interchangeability as well as having the ability to manually test the transmission directly.

With more manufacturers integrating mechatronics into their transmission lineups, there is an increasing level of difficulty in doing some of the basic functions that shops were accustomed to. Instead of the external TCM, there is now the internal TEHCM (transmission electro-hydraulic control module), which certainly raises the bar.

In addition to the new TEHCM design used in the ZF 6HP family (6HP19, 26, 32) was a new approach to how the solenoids would actually control the transmission functions with increasing precision. As with everything else, changes have occurred at ZF and Ford relating to the TEHCM since the units were first launched in 2002.

Since the 6HPs hit the street in 2002 and the 6R60s later on, in 2006, several changes have occurred to both families. There are currently five different solenoid service kits available from ZF to handle whatʼs in operation today, and Ford released new solenoids for 2011.

The initial ZF solenoid layout could be classified two ways. The more-common one is the manual “M” shift that uses seven solenoids (Figure 1). The other type is the “E” (electronic) shift, which uses nine solenoids. The E shift does not use a manual valve, either, which is a good trick. Solenoid arrangement has also changed over the years.

As shown in Figure 1, there are three solenoid designs. The yellow-cap, which is for EDS 1, 3, 6 (A clutch, C clutch and TCC) is normally vented and proportional (current to pressure), which means low current, low pressure.

The blue-cap solenoids are EDS 2, 4, 5 (B clutch, D/E clutch, EPC) and are normally applied and inversely proportional, which means low current, high pressure.

Last, the black-cap solenoid is MV1 and is a simple on-off, normally vented design that controls the D clutch when off and the E clutch when on. The resistance of the EDS solenoids is 5.5 ohms, whereas the MV1 is about 10.8 ohms.

Obviously, mixing up the solenoids would be an issue, to say the least. The upside is they canʼt be. There is a slight difference in the snout design at the large O-ring (Figure 2). The diameter of the yellow-cap solenoid is about 0.020 inch larger than that of the blue-cap, and the bores of the valve body where they go are cut accordingly. The MV1 solenoid is completely different.

The valve body in Figure 1 is the M manual design; however, the basic casting is the same for the E models. The two additional solenoids are the MV2 and MV3, which are positioned where indicated. The MV2 solenoid is like the MV1 on the M valve body. The MV3 is unique and then some (Figure 3). The green-cap MV3 has a resistance value of about 24 ohms. The MV3 operates the park cylinder, which is used in place of the manual valve. There is also an extra harness that connects the MV2 and MV3 solenoids as shown in Figure 3. Always look for the casting numbers on the valve body for clarification.

The solenoid groups are model specific, so refer to the following charts. The part number is cast/stamped into the side of the case.

On the Ford side of the fence are even more variations. The 6R60 flavor of valve bodies can also be identified by the casting marks (Figure 4).

Although the cap color is different from the ZF types, the arrangement of the solenoids is the same. Basically, consider the ZF yellow and Ford brown positions the same, as well as the ZF blue and Ford black being the same. The Ford SSE is in the same position as the ZF MV1, although the snout design is not the same (Figure 5). Large and small O-ring sizes are the same between ZF and Ford EDS solenoids; the MV1 and SSE O-rings are not. Resistance values are comparable between ZF and Ford. As with ZF, the brown and black solenoids are not interchangeable.

Currently, the brown and black EDS solenoids are not available individually, only with the valve body. The SSE solenoid is available (6L2Z-7G484A).

The solenoid application chart shows the firing order of the Ford solenoids:

Not to be outdone by ZF, Ford started to implement more changes of its own in late 2010. The engineers must have wanted to remove the mystery of it all, because all the solenoid caps are a neutral (cream) color (Figure 6). The arrangement of the solenoids is like that of the previous models, in that the EDS types do not interchange. The valve-body casting number changed from 6L2P to a 9L3P series. Unlike ZF, which switched the MV1 on-off to an EDS type, the 9L3P bodies still use an on-off SSE.

Beyond the cap-color change is the change in the snout design (Figure 7). The plastic color and design are different from prior models, as well as O-ring dimensions, so they are not interchangeable.

One other wrinkle in all this is the TCM itself. Beginning in 2010, certain Ford vehicles no longer use an internal TCM. It got booted out of the transmission. The plastic holder is still there, but the CPU is gone (Figure 8). Note the position where the CPU had been and the appearance without it.

Whether all this is a flash in the pan or a sign of things to come remains to be seen, but for now it looks like there is “no end to changing colors.”