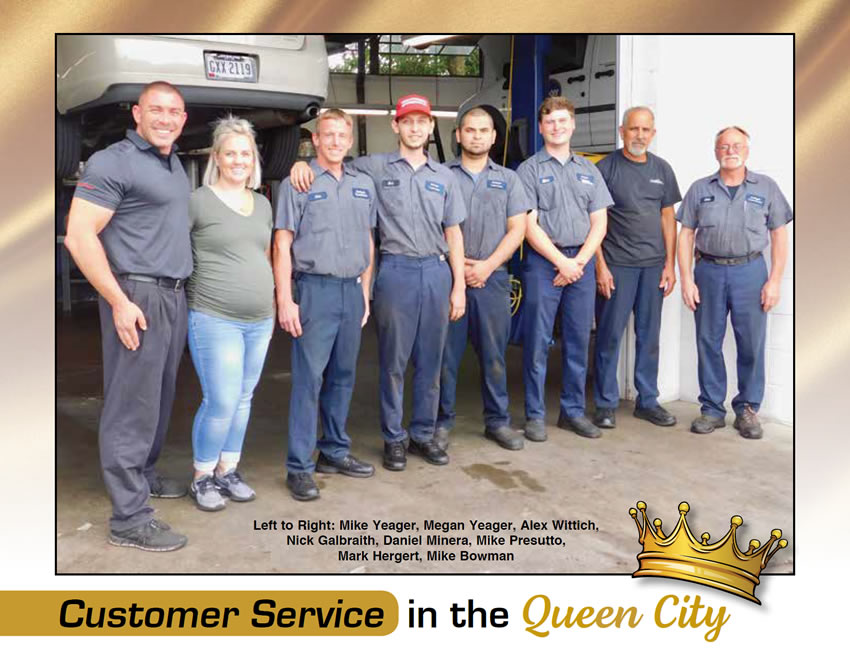 Mike Yeager entered a transmission shop after he moved to Cincinnati because his car was in desperate need of repair. Now he owns Northgate Transmissions, where his customers get a personal touch to their service and never leave the shop with an apology instead of a repair.

Mike Yeager entered a transmission shop after he moved to Cincinnati because his car was in desperate need of repair. Now he owns Northgate Transmissions, where his customers get a personal touch to their service and never leave the shop with an apology instead of a repair.

Mike’s wife Megan was originally the secretary for the business, and will still come in and help out with things from time to time when the regular secretary is out. Megan took it upon herself to call Transmission Digest and introduce us to her husband, who has been in the automotive business in some way or another for 24 years.

“I just turned forty and my first job was selling parts, so I’ve been cars my whole professional career. I’ve been a technician for Chevrolet, I’ve owned this shop for 13 years and the shop itself has existed since 1978,” Mike said.

“Honestly my transmission went out in my car and I didn’t know where to go. I ended up at like a chain in Cincinnati and the owner of the store was just terrible. He had no idea how to talk to people at all and I had just moved to Cincinnati and I just said, ‘You need a manager and I need a job so we should probably just work together from here on out.’ That’s how it started.”

After Mike bought Northgate, instead of experiencing a lull in business between owners, the facility thrived.

“Our first year we did need significantly more business than [the previous owner’s] best year ever. We had absolutely no holdbacks whatsoever. It was a very smooth transition.

“I brought my own team with me. It was a seamless transition. We bought the business two weeks before christmas and we closed through the christmas holiday, opened up at the first of the year and it’s been gangbusters ever since,” Mike said.

Mike can’t describe why things took off as quickly as they did.

“You know, I really don’t know. I forwarded the telephone number to my cell phone and I answered the phone for the two weeks that we were closed, and when I showed up on January second we had about seven cars in the lot waiting on transmissions, and we’ve never looked back.”

The business hasn’t slowed down over the years, either. Mike said that they work and complete an average of about 16 to 22 jobs per week.

“Right now I’ve probably got like 50 cars here and that;s a pretty conservative number considering it’s back to school. We’re a little bit slow,” he said.

Mike believes that the advantage Northgate has is “attention to detail.”

“We’re not like every other shop. I’m the owner, and when you bring your vehicle in I inspect your car personally, and I’m involved in the repair start to finish. I do the final road test. And, up until recently, I washed the cars myself before giving them back to the customers. We’ve now delegated that to one of our entry level guys but I’m involved in every step of it because it’s my name and my reputation,” Mike said.

“We’re real meticulous about the cars we give back. The cars don’t have fingerprints on them, there aren’t any footprints on the floor mats, you know they have thank you bags in them with air fresheners and ways to review us and we text our customers through online sources.”

Mike said that this mentality about customer service is a point of pride for Northgate. “We’re all about being different.”

Being different has brought in the customers for Mike. “I service some of the largest wholesale accounts in Cincinnati. We have some real major accounts we do everything for.

“It’s just prioritizing the customers, making them realize that, without them, we wouldn’t exist. It’s how I’ve run everything I’ve ever done associated with retail. The customer comes first. I don’t give vehicles back with apologies. I don’t say, ‘Well you’re transmission is almost right,’ we don’t do it that way here.”

Mike makes sure that his technicians are ready to service the next vehicle, no matter what kind of technological quirks it has, but maintaining an education on the latest tech.

“We’re ATRA members, and the guys do the tutorials. My technicians are pretty savvy, we have all the resources,” he said.

Mike said that he manages to keep his team running smoothly by working alongside them, rather than cracking a whip from an upstairs office.

“I think it’s because I don’t see myself as any different from them. I push cars in, I mop floors, I clean the bathroom. We’re all on an equal playing field. We all have jobs to do, and without any one of the pieces of the puzzle, the picture isn’t complete.”

Another thing that sets Mike’s shop apart is his social media presence. Northgate isn’t only on Facebook and Instagram, but also on YouTube. Mike posts videos constantly detailing repairs, with some videos getting tens of thousands of views. It was because of his videos that Mike ended up helping a man in Hawaii over the phone with the man’s Porsche.

To Mike’s core, he cares about cars because he’s a car guy. “Yes. Very much so. I’m definitely a car guy. I’m very active in auto sports,” he said.

Customer Service in the Queen City