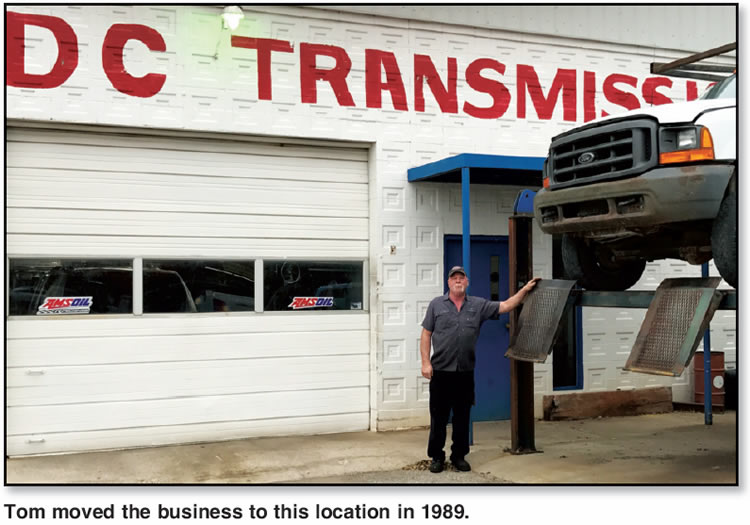 A mentor’s generosity launched Tom Fisher’s journey in the transmission repair business, in which he has earned the respect of motorists of Del City, Okla., and beyond.

2017 marks the 40th year of Tom Fisher’s ownership of DC Transmission Services, with longer milestones just around the bend.

A mentor’s generosity launched Tom Fisher’s journey in the transmission repair business, in which he has earned the respect of motorists of Del City, Okla., and beyond.

2017 marks the 40th year of Tom Fisher’s ownership of DC Transmission Services, with longer milestones just around the bend.

In a few years, Tom will attain a half-century in the transmission industry, and the shop itself will reach 60 years in 2018.

Tom’s entry into the field came at a difficult time. His father died when Tom was 16 and in high school, and his mother could not run the motel they had.

While Tom did odd jobs for the new motel manager, Tom received a job offer from one of the motel residents. It was Bill Williams, the owner of a transmission shop up the street. Tom accepted, and Bill began showing him the skills of the trade. Bill worked around his schedule for school and baseball, then college.

“He was gracious enough to keep me there. I don’t know why, but he did,” Tom said.

Tom was aiming for a career in teaching and coaching. Bill was in his 60s at that time. Tom related a conversation in which Bill made him another offer.

“He said, ‘Let’s just hang together, Tommy, and when you move on with your diploma, I’m going to shut the shop down.’ That was our plan.”

However, Bill got very sick in 1977, and Tom ran the business for several months as Bill recovered. When he came back to work, he made another proposition: he would sell the business to 23-year-old Tom and continue working with him as long as possible, but he insisted Tom must get his College Degree. Tom already had an Associate’s Degree and was about 20 hours from earning his Bachelor’s Degree, which he attained in the fall of 1979.

They worked together until Bill retired in 1988, and Tom moved the business to its current location in 1989. Bill died in 2000.

“He was a black man. You didn’t just walk up and ask a white kid a to work for you back then. I thought he was the world. …” Tom said.

“He was kind, considerate. He watched over me like a father. I listened to his advice. He could barely read a newspaper, but he had the wisdom of
Solomon.

“He ran a black business in white Del City during the civil rights movement and never had a problem. The day I took control of the business Bill looked me in the eye and said, ‘Tommy, if you put the dollar before the service, you won’t make it five years, but if you put the service before the dollar, you will never go broke,’” That tells you who he was and what he was all about.”

Four people work at DC Transmission: Tom, who works the counter and builds; his son Zac Fisher, a certified builder and R&R technician; and Tom’s grandson Gage Graham and Mike Fannin, both R&R technicians.
Employees usually stay for long tenures, which is important for continuity for loyal customers, Tom said.

Most important is to build trust among customers and would-be customers in a radius of about 100 miles stretching from central Oklahoma, he said.

“If we can’t fix your car, we won’t take your money” is one of Tom’s mottos, and by practicing it, the business has prospered by way of word of mouth.

“I don’t charge for a diagnosis. I’d feel bad if I’m taking $100 and they still have the same problem,” he said. Then he’ll tell a motorist what’s wrong with a vehicle, and he’ll say whether it needs to get fixed immediately or not.

“That resonates out through the community.” he said.

“And after 39 years of this, it’s mushroomed out.”

Every automaker has a different kind of strategy, a way vehicles “think,” Tom said, adding an example:

“If you have a bad oxygen sensor on a Dodge truck and it’s a gas engine, you better get it fixed because you can damage the transmission if it loses its ground – the O2 sensor fails, and if it’s a ground loss – the governor pressure solenoid in the transmission shares the same ground (and the transmission could be damaged).

“Within 500 to 1,000 miles, the tranny’s burned up because you’ve got an oxygen sensor light on. And people say, ‘No way.’ I say yes, you’ve gotta change oxygen sensors or I won’t guarantee it. Ford and GM have their issues, too.

“So, when you diagnose these cars, you have to know how they think.”

To grasp how cars think, technicians must be willing to read and understand resources on vehicle repair and apply what they learn,” Tom said. “To keep up with technology you must attend workshops and seminars annually or you will be left behind. I’d say the mechanic of the future won’t be a 16-year-old dropout, he’ll be a very highly educated person with a decent IQ. When a $40-50,000 vehicle rolls up to your shop with over 500 grounds and 1-2 miles of wire on it, you better know how to diagnose it. Just changing parts doesn’t always fix it. The ‘old school’ ways don’t work anymore.”

The shop sits between stoplights, enabling motorists to note its presence. However, these days, most of the people sitting at a stoplight are looking at their cellphones, Tom said with a laugh.

Tom has made a hobby of restoring muscle cars and has a barn filled with 12 vehicles. “People know I do that, so I do a lot of custom work: specially build a transmission for a street rod, or I’ve got a ’67 Camaro in here right now that we’re going to put a 700 in.

He does work for James Goad, one of the drivers of the 405 Street Outlaws, as seen in “Street Outlaws” on the Discovery Channel. Goad’s ’68 Camaro,

The Reaper, hovers around third to fifth on The List, Tom said.

With a drag strip in the area, Tom also does hotrod work for competitors.

Tom, who said he’s not slowing down at 63, has acquired adjacent property for expansion from six bays to 13. One of the new bays will be for heavy-duty pickups, some with Allison transmissions. He expects the expansion will take two years, starting with bidding this summer.

Meanwhile, he’s preparing customers for Zac eventually taking the helm, although Tom plans to remain a part of the business.

“When you take your car in, you want to see familiar faces. I’ve got customers of 30 and 40 years,” Tom said.

“So, when they bring their car in, they see familiar faces, and they know that we know we’ve worked on your car before, and we know what we did for it, and we’re trying to figure out what it’s doing now. People like that.”

As for the 40th anniversary?

“You don’t like to go around tooting your own horn. I might put something out there to thank the community.”