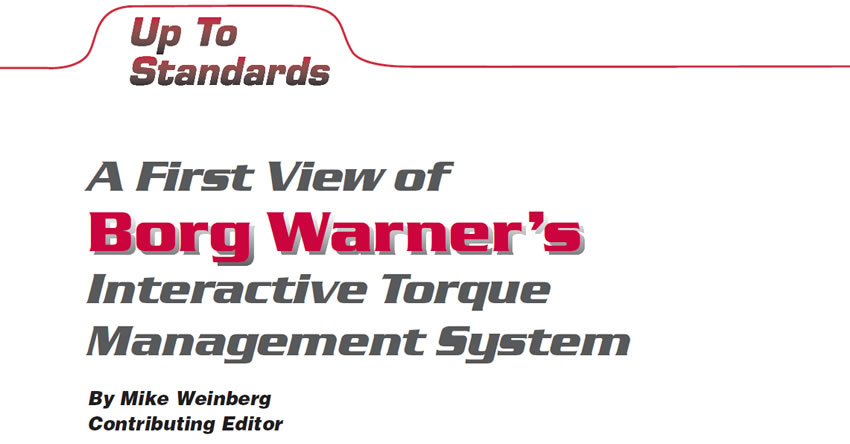 The quest for better technology never rests. The cars being produced today are perhaps the best ever for durability, emissions control, fuel efficiency, handling, braking and power. You don’t have to be in our industry for very long to realize that, across the board, the manufacturers are building great products. If the car owner follows the prescribed maintenance schedules, there is an excellent chance that his vehicle will easily exceed 100,000 miles without a major component failure.

The quest for better technology never rests. The cars being produced today are perhaps the best ever for durability, emissions control, fuel efficiency, handling, braking and power. You don’t have to be in our industry for very long to realize that, across the board, the manufacturers are building great products. If the car owner follows the prescribed maintenance schedules, there is an excellent chance that his vehicle will easily exceed 100,000 miles without a major component failure.

This, combined with the low interest rates, aggressive sales programs by the car makers and heavy competition from the factories on the repair side, has many of us wondering where we will be in five years. Logic tells us that there will be fewer transmission shops and that those shop owners who are technically and diagnostically proficient and have learned to sell their work for its true value will be doing well.

The shops that have not made the commitment to learning and the investment in tooling and diagnostic equipment are already dead but don’t know enough to fall over. There is no standing still; if you are not learning every day you will be unable to catch up and to keep up.

On the design side the car makers are continually working toward better products. Better tire technology has led to great improvements in handling. All-wheel-drive and active four-wheel-drive systems have made dealing with weather conditions easier. ABS has helped to control unwanted skids caused by wheel lockup under hard braking. Traction control helps the driver modulate the throttle to reduce wheel spin and power-induced oversteer.

The latest area of development has been stability control, which is an attempt to prevent spins and rollovers caused by oversteer and understeer conditions and, through electronic damping of the shocks, to try to keep the tire footprint planted on the ground despite driver error.

Much of this technology is made necessary by the pathetic state of driver education in this country. People are not taught to drive here; they are taught how to make a car go. The bureaucrats in the motor-vehicle departments are much more concerned about parallel parking than they are about controlling a car sliding across two lanes of oncoming traffic.

In 2004 about 43,000 people lost their lives in traffic accidents. That’s a down trend from the previous decade, which averaged 50,000 fatalities a year. If we lost 54,000 men in the Vietnam War and it took 10 years of fighting to reach that number, it shocks me that we lose an average of 118 people a day and no one seems to notice. The decline in the death rate is primarily due to improvements in crashworthiness of late-model vehicles and the life-saving effects of seatbelts and airbags. The vehicle manufacturers are working hard to try to save more drivers from themselves through further advances in technology.

The growing trend is to all-wheel drive. Beyond the SUV market many car models in both front- and rear-drive design now are being offered with all-wheel drive for added safety and all-weather capability. The current trend is to have a front-drive car with a power take-off from the transmission to a transfer case and ultimately to a rear differential. This is now a common design, and BorgWarner has taken it to a higher level by redesigning the rear differential.

Differential design has been little improved for many years. There are open differentials, and clutch- and gear-driven limited-slip or “posi” units. Present traction-control systems work by reading wheel speeds and applying individual brakes and/or deactivating cylinders in the engine to equalize wheel speeds. These systems, although a positive step, are reactive to road conditions and driver error (lack of skill or attention). In short, the best traction-control systems are trying to correct an already-occurring situation.

BorgWarner has designed a new concept in differential technology in collaboration with ProDrive, a European engineering firm with deep expertise in road racing with special emphasis in fielding winning teams in the FIA Professional Rallye Series. The result of this collaboration is a new way to differentiate power to the driving axles.

This system uses a spool-type carrier, in which both axles are locked to the carrier with no side gears and pinion gears. Outside of the differential case are two wet-clutch packs that then connect to the drive axles. The front-drive transmission uses a power takeoff to send power to a transfer case that contains an apply-on-demand torque-vectoring center differential. An added bonus to this system is the reduction of NVH (noise, vibration and harshness) through the transmission and power take-off. The torque-sensitive center differential and the clutch packs on the rear differential are wired into a powertrain computer. This computer has a software strategy that receives inputs from the ABS sensors, which provide wheel-speed signals; yaw-rate sensors, which monitor body roll; steering-wheel-angle sensors, which tell the computer the position of the steering wheel; the throttle-position sensor; and other usual inputs such as transmission-range sensor and brake-pedal-position sensors.

BorgWarner calls this system “Interactive Torque Management.” Traditional active transfer cases can engage systems to transfer torque between axles to adjust for wheel slip, but they are always playing catch-up. The beauty of the BorgWarner ITM system is that it is proactive. The system knows the position of the steering wheel, the yaw rate, the throttle angle and brake-switch position and can react more quickly than the driver to improve vehicle handling.

This is particularly helpful in oversteer situations. Oversteer can occur when a driver enters a corner at high speed or under slippery conditions and the rear of the vehicle tends to break loose and slide outward. The average driver will instinctively turn the wheel in the direction of the slide, but it is rare to get the car exactly straight. The result is a pendulum effect on the unsettled chassis, and the car will make at least a second reaction that the driver is usually unprepared for. The BorgWarner ITM system can anticipate the problem before the driver and, through torque management, prevent a spin. Using the same principles, the system works equally well to prevent understeer, in which the front end of the vehicle tends to push toward the outside of a turn.

The ITM system has been prototyped with favorable results, and BorgWarner is perfecting the hardware and software to refine the system. As the parts are developed, and manufacturing costs and system weight are reduced, the car makers will buy this technology, and it won’t be long before you are seeing one of these vehicles in your shop.

New technology has many influences on our society. It creates better, more-efficient products and produces an ongoing need to learn continually and to upgrade equipment for those who service it, and it displaces jobs while creating others. You can choose to embrace the technology and add it to your skills, or you can retire or switch trades. It isn’t a career; it is an adventure.

Advertisement
In this article:BorgWarner, BW, Interactive Torque Management System, Up To Standards