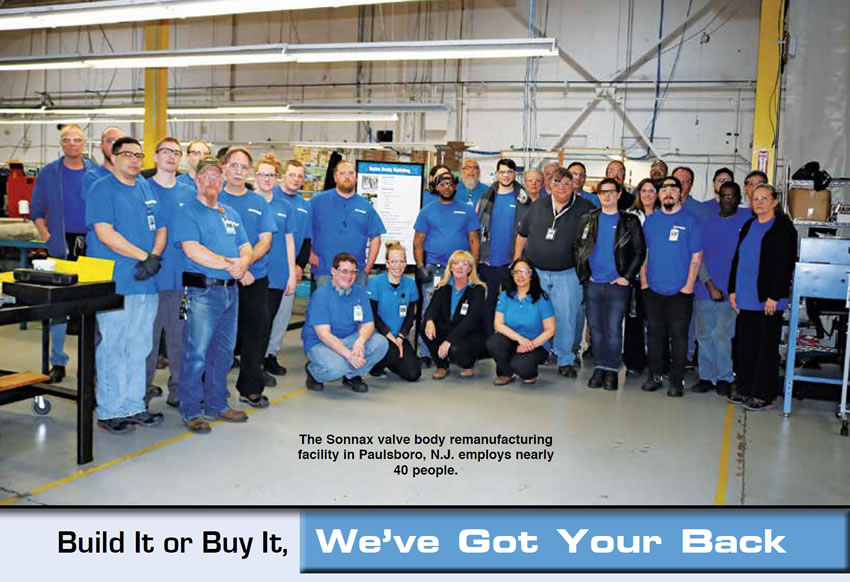 In 2014 Sonnax expanded its role as a supplier of aftermarket valve body components with the acquisition of VBX, a remanufacturer of valve bodies located near Philadelphia in Paulsboro, N.J.

As the complexity increases for transmission builders to restore, and often fix or improve, a valve body, the “buy it” rather than “build it here” decisions have become more frequent. In 2014 Sonnax expanded its role as a supplier of aftermarket valve body components with the acquisition of VBX, a remanufacturer of valve bodies located near Philadelphia in Paulsboro, N.J.

“How can we deliver value to our customers—that is what drives us to develop and deliver what shops need, when they need it,” explained VP of sales Mark Kaplan. “As transmissions and our customers’ needs evolved, including remanufactured valve bodies was a natural progression for us.”
“I think what makes Sonnax different is the quality our engineered components bring to the finished reman unit,” added technical specialist Jim Dial. “All of the R&D that goes into our transmission components and hydraulic fixes is behind the reman valve body products we supply.”

“Often, new product development in the transmission components line is fueled by our experience here in the remanufacturing facility. We’ll see more of a given valve body in a day than many shops will see in a year.”
“In reman we take advantage of the familiarity that the R&D teams have with components developed to fix issues. At the plant we put all those components together and work with the entire valve body unit. The people developing those components have done the work, removing much of the mystery from what we need to accomplish.”

Sonnax Senior Engineer Scott Jackson observed: “The things we’re working on are getting fine-tuned by looking at a great number of valve bodies. Listening to customers’ feedback is a good method, but actually examining hundreds of valve bodies for remanufacturing gives an excellent indication of what we need to develop to address problems that are going to be common within a specific valve body unit.

“To start, we determine what the OE spec should be with a known-good vehicle. Next, we take the adaptive computer back to its neutral status, the state it has before any adaptions. Then we watch as it goes through a number of shift cycles to learn to work properly. We then vary something like changing a valve and watch how many shift cycles it takes to get to perfect again. Our development process isn’t complete until we can put our remanufactured valve body into a known-good vehicle with a known-good transmission and be able to drive away with the same performance as the original OE valve body.”

“It’s unique to Sonnax,” adds marketing director Beth Houder, “to have that foundation behind it and to have the research and development that has produced all the valves and sleeves that address the problems as needed to remanufacture these valve bodies.”

Bob Warnke, VP of technical services at Sonnax, describing the process, said, “Our strong suit goes back to the fact that our first customers were volume transmission remanufacturers who are competing against the OEs. They require their valve bodies to last through the warranty period and beyond. So, we’ve often improved on the weaknesses of the original design by using different materials or other designs that reduce the duty cycle and wear patterns. For the OE it was a cost issue but, in the aftermarket, we can afford to address those issues. We have unique ways to increase the life of a valve body but without changing the shift characteristics from the original.

“When Scott or another one of us goes through a pile of valve body cores we’ll see that a particular valve is always wearing out at this location. And we ask ourselves, what is it we could do to reduce that wear or extend the life of that valve.”

Product line manager Maura Stafford added, “We have the luxury of hindsight that’s always 20-20. We can start with the OE design and see why the unit is failing and with root cause analysis, incorporate features in the Sonnax valve that will add durability. An OE may not want to invest an additional 25 cents in a valve that will be able to pass the warranty period without it. But, in the aftermarket, we can afford to do that.”

Referring to Sonnax’s ownership by the Marmon Automotive Aftermarket Group Division of Berkshire Hathaway, Boyer told us, “We’re able to call upon the knowledge and expertise of other divisions within Marmon like Rostra. All of these valve bodies need solenoids so we have linked development cycles with both Rostra and the Sonnax transmission components team so that all the parts we’ll need get developed at the same time. One of the things we struggled with has been how to get the solenoids we need to support the remanufacturing of these new valve bodies. Having Rostra in the [corporate] fold is very much a positive going forward.

Spaseff added, “In many cases, Rostra is selling us new solenoids from their inventory. As we move forward into new projects we can work to develop the solenoids and the valve body at the same time.”

Turning to the plant’s remanufactured valve body processes, Spaseff told us, “Before we introduce a new valve body, Scott’s group performs an investigation that will include everything from measuring the bores and valves to vacuum check data on a fairly large sample of that particular valve body. We look at what will be the 100% replacement items, components that are replaced in every one of those we build. As that valve body goes through its lifecycle we’re looking to see what changes. We might see that as time goes by we’re using more of an optional replacement part and, if so, we will change to procedure to replace that component every time as well.”

Stafford explained the requirements developed for each remanufactured valve body, saying, “There’s a baseline build that says no matter how good a shape a valve body core is in it gets certain parts replaced, as we have identified them as chronic failure points. Beyond that, there’s an ‘as needed’ list of parts that are used depending on our testing of that specific unit. There are issues we commonly see, but not in every instance. And as we monitor those issues over time with aging cores, some parts will be needed more and more often, to the point they are added to the baseline build requirement.”

“Meeting OE spec – that’s our performance benchmark – means continually monitoring cores as they age and adjusting the baseline build as needed throughout the product lifecycle,” added Dial. “It’s a continuous improvement process and ensures Sonnax quality in every unit.”

“We have a very different valve body reman process than most other folks who are doing this,” said Boyer. “We’re taking units all the way back to OE performance. That’s what shop customers care about. They don’t want a comeback and that’s exactly what we’re doing throughout our whole process – preventing comebacks. We create reliability so that when that shop puts that valve body into a rebuild there is full confidence in the Sonnax quality.”

Warnke explained that testing a valve body begins when it comes into the plant and continues at each step of the process.

“We’re putting out OE performance level valve bodies,” Stafford said. “All of our valve bodies are in-process tested using vacuum. Our end-of-line tests on the VBT 8000 speak to that new, OE level of functionality in that we create and perform a sophisticated, complete drive cycle test to make absolutely sure that we haven’t missed anything. That’s the proof in the pudding of the entire remanufacturing process. What makes the valve body a great product is the complete process, but it’s that last test that gives us the confidence to know it’s ready for our customer.”

Warnke continued by saying: “The test equipment here is far advanced from the days when all that we measured was the pressure at the end of a shift. We now monitor pressure rise and clutch/TCC overlap in tenths of a second.”

“The machines we use may look like a machine that can be purchased in the marketplace, but we’ve modified them substantially to meet our requirements.”

Warnke connected testing requirements to capturing and restoring a valve body to OE specs. “With a four-speed it was possible to change springs or orifices to address a shift issue. But with adaptive strategies in the vehicle computer, that approach won’t work.

“For example, the torque converter clutch is extensively used for fuel efficiency. So, if you simply turn the converter on and off the shifts become harsh. That means a service part/valve has to be exactly like OE or the computer may not adapt.

“Four- and five-speeds are much easier to diagnose and to modify than later model transmissions with the adaptive strategy. In the late units a condition may be caused by four or five different things. It’s not a good thing in these cases to start throwing parts at the problem. Diagnostics is more important than ever and that’s the reason we have included so much diagnostic information packed inside our Zip Kit line.”

“Part of the customer support that we offer involves providing technical and installation tips,” Houder adds. “It’s a case of putting additional documentation in the box and on www.sonnax.com so that the shop will have the information needed to get the vehicle through the re-flashing process successfully so as to avoid an unnecessary comeback.

“In the Sonnax van, Randall Schroeder drives across the U.S. every year teaming up with distribution partners to visit transmission shops. He is looking at issues and problems those businesses are seeing while also teaching vacuum testing and reaming processes that form the foundation for using a lot of the Sonnax hydraulic solutions.

“’Build it’ or ‘buy it,’ we’ve got your back. We talk about quality and value as our guides to both lines of product. When the shop customer’s vehicle goes down the road and continues to have the desired drivability it’s a win for the shop; it’s a win for Sonnax.”

Stafford proclaimed, “We’re only as successful as our customer!”

And, Boyer concluded by saying, “We believe that Sonnax makes the best aftermarket valve body available anywhere. Our retail shop customer, or volume remanufacturer customer, can rest assured that they’re getting an OE performance valve body without having to go to a dealership and buy an OE valve body at an OE price.”

Sonnax: Build It or Buy It, We’ve Got Your Back