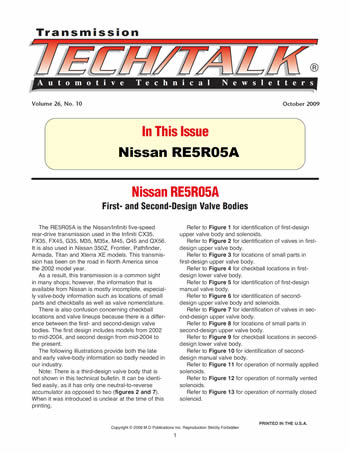 In This Issue
Nissan RE5R05A: First- and Second-Design Valve Bodies

As a result, this transmission is a common sight in many shops; however, the information that is available from Nissan is mostly incomplete, especially valve-body information such as locations of small parts and checkballs as well as valve nomenclature.

There is also confusion concerning checkball locations and valve lineups because there is a difference between the first- and second-design valve bodies. The first design includes models from 2002 to mid-2004, and second design from mid-2004 to the present.

The following illustrations provide both the late and early valve-body information so badly needed in our industry.

Note: There is a third-design valve body that is not shown in this technical bulletin. It can be identified easily, as it has only one neutral-to-reverse accumulator as opposed to two (figures 2 and 7). When it was introduced is unclear at the time of this printing.