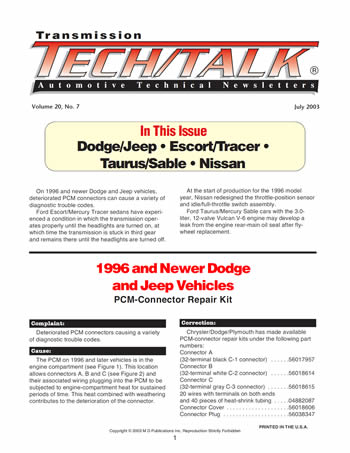 The PCM on 1996 and later vehicles is in the engine compartment (see Figure 1).

This location allows connectors A, B and C (see Figure 2) and their associated wiring plugging into the PCM to be subjected to engine-compartment heat for sustained periods of time. This heat combined with weathering contributes to the deterioration of the connector.

Chrysler/Dodge/Plymouth has made available PCM-connector repair kits under the following part numbers:

In many instances, the license-plate lights will be dim.

The problem is the G401 ground in the right-rear corner of the trunk (see Figure 8). When this ground is bad, feedback goes through the inhibitor-switch reverse-lamp circuit. When the computer receives this signal, it turns off all shift solenoids and the transmission is in third gear, because all shift solenoids are normally commanded off in reverse.

Remove the tape from this area of the wiring harness and repair the broken ground wire.

In the left-rear corner of the trunk, shown in Figure 8, is the G402 ground, which is spliced to the G401 ground. In the event the problem for this complaint is not found at the area of the passenger-side trunk-lid hinge, be sure to check the G402 ground circuit as well.

The throttle-position sensor and idle/full-throttle switch assembly was redesigned at the start of production for the 1996 model year.

The current-design throttle-position sensor and idle/full-throttle switch assembly will not interchange with the previous design.

TPS part numbers will vary with engine and model application for both front- and rear-wheel-drive vehicles.

After flywheel replacement, the vehicle may return with a leak from the engine rear-main oil seal. The vehicle did not have this leak after the road-test leak check.

On Ford Taurus and Sable cars equipped with the 3.0-liter, 12-valve Vulcan V-6 engine, over-tightening the flywheel-to-crankshaft bolts can easily pull the crankshaft out of round, causing the seal to leak.

When replacing the fly-wheel, be sure to install it with the stiffener plate toward the transmission, and torque the flywheel-to-crankshaft bolts to 54-64 lb.-ft. in a cross pattern as shown in Figure 11.