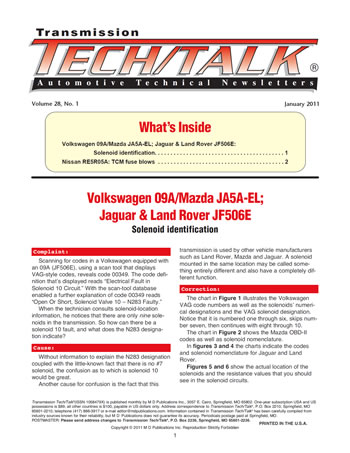 Scanning for codes in a Volkswagen equipped with an 09A (JF506E), using a scan tool that displays VAG-style codes, reveals code 00349. The code definition that’s displayed reads “Electrical Fault in Solenoid 10 Circuit.” With the scan-tool database enabled a further explanation of code 00349 reads “Open Or Short, Solenoid Valve 10 – N283 Faulty.”

When the technician consults solenoid-location information, he notices that there are only nine solenoids in the transmission. So how can there be a solenoid 10 fault, and what does the N283 designation indicate?

Without information to explain the N283 designation coupled with the little-known fact that there is no #7 solenoid, the confusion as to which is solenoid 10 would be great.

Another cause for confusion is the fact that this transmission is used by other vehicle manufacturers such as Land Rover, Mazda and Jaguar. A solenoid mounted in the same location may be called something entirely different and also have a completely different function.

The chart in Figure 1 illustrates the Volkswagen VAG code numbers as well as the solenoids’ numerical designations and the VAG solenoid designation. Notice that it is numbered one through six, skips number seven, then continues with eight through 10.

The chart in Figure 2 shows the Mazda OBD-II codes as well as solenoid nomenclature.

In figures 3 and 4 the charts indicate the codes and solenoid nomenclature for Jaguar and Land Rover.

Figures 5 and 6 show the actual location of the solenoids and the resistance values that you should see in the solenoid circuits.

Late-2004-and-up Nissan vehicles equipped with the RE5R05A transmission may exhibit a complaint of a TCM fuse that blows continually after overhaul or TCM/valve-body replacement. When the fuse is blown the TCM is inoperable. No communication to the computer can occur with a scan tool to acquire codes, and the transmission will be stuck in 4th gear.

The cause may be that connector F-502 was cross-connected with F-505. When this happens, terminal 10 in F-502 will be connected to the vehicle-speed-sensor ground circuit, causing the fuse to blow. See Figure 7 for a face view of the F-502 and F-505 connectors.

Note: Both of these connectors are gray and have identical configurations, so cross-connecting them is very easy.

Refer to Figure 9 for connector ID and configuration.

Refer to Figure 10 for a wire schematic of the TCM, internal harnesses 1 and 2, and the case connector.