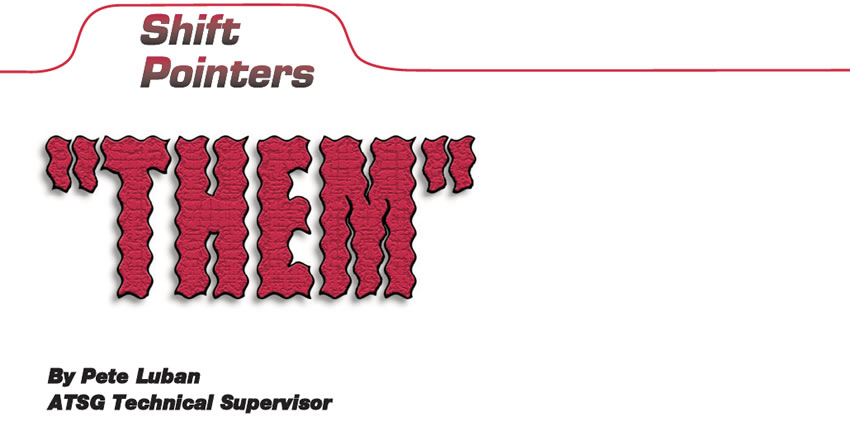 The title of this article envisions scenes from that 1950s “B” sci-fi movie by the same name – only, in this instance, “THEM” refers to the original-equipment manufacturers. This month I have a few tidbits relating to problems you may have to deal with that were created by the vehicle manufacturers.

The title of this article envisions scenes from that 1950s “B” sci-fi movie by the same name – only, in this instance, “THEM” refers to the original-equipment manufacturers. This month I have a few tidbits relating to problems you may have to deal with that were created by the vehicle manufacturers.

The first problem concerns 1998 Ford Explorers and Rangers and Mercury Mountaineers. These vehicles may come into the shop with complaints of the O/D lamp flashing and code P0741 for “TCC Stuck OFF” or P1740 for “TCC Malfunction.”

In the best-case scenario, you would have a badly slipping torque-converter clutch or no TCC apply. The worst-case scenario might be that when the transmission is placed in reverse, you feel the engine “drag down” and when the throttle is increased the engine stalls.

The problem is the TCC-solenoid mounting bracket. It seems that TCC solenoids with lot numbers 769 to 771 (see Figure 1) were manufactured with defective spot-weld points that would allow the solenoid to break away from the mounting bracket (see Figure 2), allowing the solenoid to back out of its bore. This would permit reverse-boost oil to apply the converter clutch and cause the complaints mentioned.

The solenoids with the lot numbers listed were manufactured in only the 1998 model year. The part number for the new TCC solenoid is F77Z-7G136-AA.

The next problem concerns 1997 Acura 3.0-liter CLs with the M7ZA or B7ZA transaxle. One of these vehicles may come in with the malfunction indicator lamp on and OBD-II codes P1768 and P1773 stored for A/T pressure-control solenoid electrical-circuit fault. If you jump the service connector (see Figure 3), you will get the corresponding two-digit codes 16 and 23.

What usually happens next is that two rather expensive solenoids are replaced – which, of course, does not cure the problem. This is not to say that these codes can’t be generated by electrically faulty solenoids or wire and/or connector problems; they most certainly can. This problem is caused by (get ready for this) random electrical spikes from the ignition switch that cause the transmission control module to store false pressure-control-solenoid codes.

Now, don’t rush to buy an ignition switch; replacing the switch will not cure this problem. The fix is to replace the TCM (see Figure 4). The part number for this TCM is 28100-P8A-003.

Our final problem concerns 1999 Ford Windstar minivans that come in with code P0715 or P0717 for loss of turbine-speed-sensor (TSS) signal.

If all your TSS diagnosis comes up negative, the fix is to reflash the powertrain control module. This problem affects Windstars built through April 1999. It seems they were equipped with incorrectly programmed PCMs that unintentionally filtered the TSS signal.

Make certain that the reflash has not been performed already by looking for the “Authorized Modification” sticker (see Figure 5) somewhere around the emission sticker under the hood in the area of the radiator support. You can refer to this modification and its relevant information by acquiring factory TSB 99-19-1.

Thanks to all my readers for their comments. When one of you tells me that you read something in one of my articles that helped you nail down a problem you were having, it makes all worth while. I wish all of you and your families happy holidays and prosperity for the coming year.