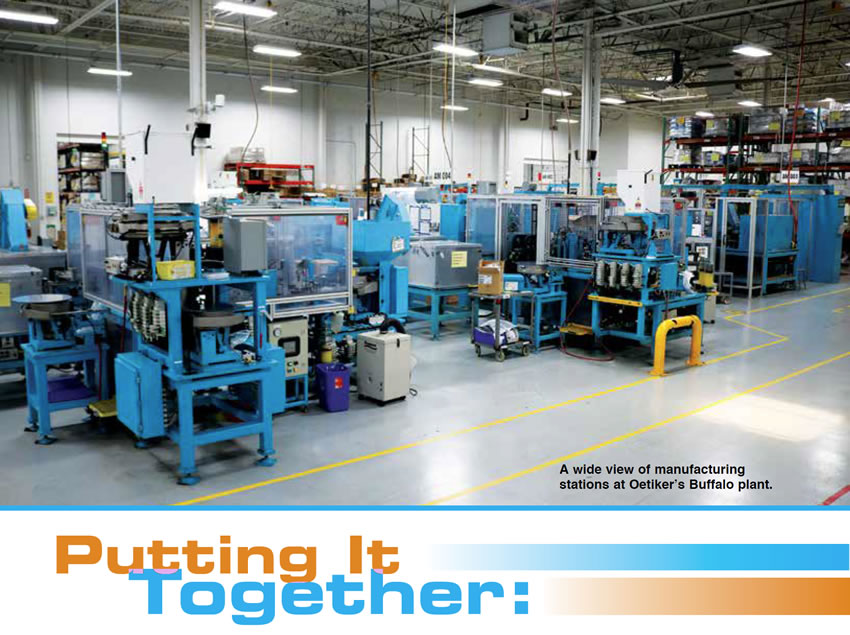 “It’s easy to think of a connector or clamp as something simple,” said Oetiker Regional Marketing Manager Brett Moffett. “But, there is a reason that the OEMs have consciously decided to invest into the quality and reliability of the Oetiker connection. The same consideration is as important in a high-mileage aftermarket application as it was to the OEM. “At Oetiker our motto is providing customers with ‘peace of mind.’ When a customer uses our connections they do not have to worry about a failure. This also translates into peace of mind for those giving a warranty for a transmission job or any other type of automotive repair.”

Moffett, Marketing Manager Ryan Zillig and Account Manager Brent Christensen met with Transmission Digest at one of the company’s North American facilities located in a suburb of Buffalo, NY. The facility was once the headquarters for Jiffy-tite quick connectors (see Transmission Digest April 2016). In 2017, Oetiker, a Swiss manufacturing company well-known for making a variety of clamps and connectors acquired Jiffy-tite thus adding the quick connectors to an extensive line of its own connectors and clamps used in automotive and industrial applications.

Christensen said he joined the company 37 years ago and currently supports the company’s clients in Michigan, Ohio and Western Pennsylvania. When Hans Oetiker came to America to purchase land for his first Oetiker North American facility in Marlette, Mich., he hired Brent as one of the first U.S. employees.

To this day, the company’s headquarters and much of the application development work continues to take place in Switzerland. Transmission line fittings including the well-known quick disconnects are still designed and manufactured in the Buffalo facility.

Moffett said that he joined the company a couple of years ago after spending 16 years in sales and marketing for a foundry company that manufactured cast iron and cast steel parts for a variety of applications including automotive. Moffett’s responsibilities include marketing of Oetiker products throughout the Americas.

Zillig added that while both companies had ties to OEMs in the automotive field, it was Jiffy-tite’s knowledge of the aftermarket customers that has been a useful asset as Oetiker looks to expand its brands to the automotive repair aftermarket.

“We have tools manufactured in our Connecticut facility that can install or remove clamps and connections; we have the clamps themselves for use as hose connectors and then we supply quick connects for metallic oil line sets,” Zillig said. “So, we can go to customers with what is pretty much a full-line offering of automotive connecting products.”

Moffett continued, saying, “This facility continues to produce the quick connector products as it always has. The majority of the hose clamp connections for North American vehicle applications are made at a plant in Alliston Ontario and there’s a plant in Marlette, Michigan manufacturing clamp product lines for non-automotive connections, for use in plumbing, irrigation, medical and other industrial applications.

“Virtually every car that is manufactured in the world has Oetiker clamps or connectors, or both on it. That will include air bags, heating and cooling applications, CV boots and such. Going beyond automotive, we like to say that a person almost always is within 50 feet of an Oetiker clamp. Or quick connect.”

With production of approximately two billion connections every year, it’s easy to see how such a boast easily could be true.

Christensen said that Oetiker doesn’t necessarily compete for every connector and clamp on a vehicle but rather concentrates its efforts on what he calls “mission critical” connections, those that require a zero-failure rate.

“The company concentrates development efforts on those ‘mission critical’ connections,” Moffett continued. “We’re looking at situations where a failure means something really bad happens. Even the slightest leak in a mission critical connection is a failure. Take for example one of our plumbing connections. A little leak behind the wall probably wouldn’t be noticed until there has been some real damage to the wall or the structure or there’s a colony of mold growing behind the wall.

“We make those connections for airbags. If a collision happens while you’re driving to work and the airbag doesn’t fully or properly deploy because of a leaky connector, that’s not acceptable.

Zillig added, “There are competing clamps in the marketplace. Most of these tend to be screw clamps as opposed to the high-volume ear clamps Oetiker is famous for. Oetiker doesn’t promote screw (also called worm drive) clamps in the product line because we believe that the ear clamp is a superior method of connecting. And we offer some ring clamps that offer even more reliability. You can take a look at how a worm clamp often leaves a small gap whereas the ear clamp used results in a uniform, 360º seal.”

The ear clamp traces its beginnings back to the early 1950s and is the invention of company founder Hans Oetiker. The story goes that Oetiker saw a car leaving a parking lot and there was a puddle of oil where it had been parked. That led him to look for ways to better seal the connections in automobiles and his first solution was the two-ears clamp, a design that is still sold in the company’s product line today. Since then different ear clamps have been designed and marketed but the original model, in various sizes, remains the number-one seller for Oetiker.

Christensen said, “The failure point that is often found with the screw clamps is a situation in which the clamp band lifts away over time from the sealing material and creates a leak path through the locking element. The advantage of the ear clamp is that you get that 360º seal with consistent tension over time.”

Moffett added, “Another advantage is that you can get more force on the connection with the ear clamp. With a screw clamp the tightening force is coming from a slot screwdriver and at some point, as you put more force on it, the teeth will begin to slip. With the ear clamp you can apply more force because there isn’t anything there to slip. For similar reasons the worm or screw drive clamps can loosen over time from heating and cooling or from vibration. This isn’t likely to happen with the ear clamp. Finally, a lot of OEMs don’t want to make these connections easily serviceable and the one-time use clamps are perfect for these tamper-proof applications.

“A very high-performance connection is also available from Oetiker, one in which the connection is a simple ring or band of metal, like a wedding band. The install tool compresses this by applying equal pressure to all points on the circle of the band. These are very specific mission critical connectors and for every ½ mm change in size, a different head is needed for the installation tool.”

Ear clamps share a single installation tool and there is an available removal tool for these.

“We did a lot of listening last year at AAPEX. We were talking to folks from aftermarket repair shops and those who sold them parts. We found that in almost every instance, they wanted to replace what they took off with the same part. We concur. That connection was specified into the vehicle for a reason. OEMs have made the conscious decision that they want to use Oetiker connections because the application warranted a level of quality and reliability that was achieved there.

“What we also learned was that there was a desire to use Oetiker connections for aftermarket repairs, but they didn’t necessarily know how and where to find those connectors.”

“With a website and a network of distribution, we’re focused on making those clamps and connectors easily available to any automotive repair facility,” Zillig continued. “We understand that often connections are the last step of someone’s transmission job. We know that it’s one of the most important steps as well. If everything’s perfect and then, to save maybe a dollar, a connection is used that fails, it’s a comeback. It’s just as expensive for the shop as any other failure, maybe even more expensive as a fluid problem can result in a great amount of damage to internal components.

“There’s more to Oetiker reliability and quality than the design of the connector or clamp. Quality control is more than a part of our manufacturing processes it is at the center of our culture. Our clamps are made from stainless steel. We do use different alloys depending on the specification for a particular connection that take into consideration operating temperatures and corrosion resistance. And, once again we make the case for using the Oetiker replacement part for the original in order to assure that the part not only fits but that it contains the correct materials to provide the designed reliability in service.

“One of the things we hear from jobbers and from repair shops is that ‘we’d love to use your fittings and clamps but it isn’t always easy to get them.’ We developed some assortment packages for these guys that work with Oetiker’s online support program so that a year/make/model search will provide information on which part to use. That’s a program that is just now coming to the marketplace.

“Another important marketplace need we’re addressing relates to the metal, OE transmission cooler lines. The tier suppliers to the OEMs only supply those lines for a given number of years. So, here’s an application that’s 12-years old and the metal lines aren’t available anymore. We’re coming up with something that addresses that market deficiency; something we’re calling an oil cooler-line service kit. These will include quick connectors, clamps, and adapters so that the repair facility can create a reliable replacement line using recommended hose with the same OEM connections that are necessary for a specific application. In the end you have a reliable and inexpensive replacement on hand for the OEM oil cooler line.”

The group concluded by observing that going forward informing and educating the aftermarket will continue to be key to Oetiker’s growth and success.

The first of two main goals will be expanding the understanding of the technology and reliability of the Oetiker product line. And finally, the company will continue to develop an easily accessible network of distribution so that repair and installation shops can take advantage of Oetiker’s premium connections.

Oetiker - Putting It Together