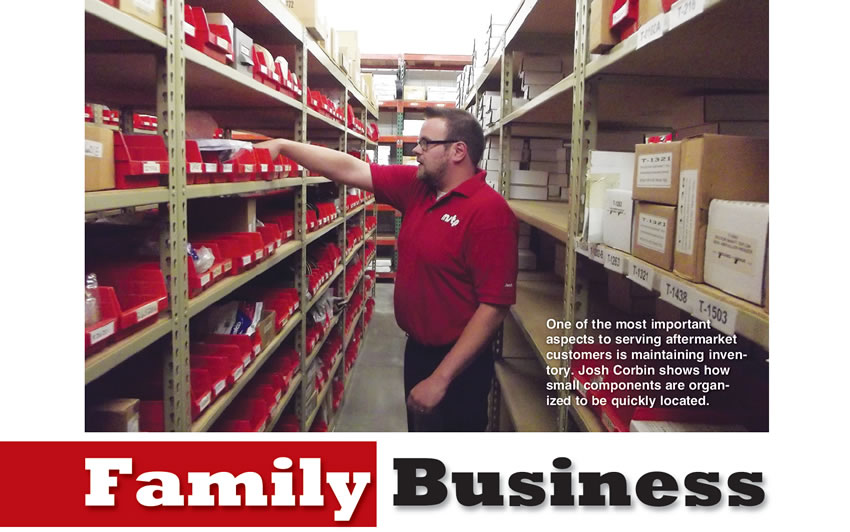 It wasn’t always the case but considering the past 15 years, in today’s aftermarket, the story of a family-owned, single location transmission specialty parts distributor stands out amid a consolidated industry. Transmission Digest recently made its first visit to the people of Mid States Transmission Parts in Davenport, Iowa. By way of geography, Davenport joins Bettendorf and, reaching across the Mississippi River border between Illinois and Iowa, Moline and Rock Island to form the Quad Cities. The John Deere Corporation is headquartered in Moline and the area. Deere’s sponsorship results in the area hosting the annual PGA Tour stop aptly named the John Deere Classic.

It wasn’t always the case but considering the past 15 years, in today’s aftermarket, the story of a family-owned, single location transmission specialty parts distributor stands out amid a consolidated industry. Transmission Digest recently made its first visit to the people of Mid States Transmission Parts in Davenport, Iowa. By way of geography, Davenport joins Bettendorf and, reaching across the Mississippi River border between Illinois and Iowa, Moline and Rock Island to form the Quad Cities. The John Deere Corporation is headquartered in Moline and the area. Deere’s sponsorship results in the area hosting the annual PGA Tour stop aptly named the John Deere Classic.

MSTP supplies the entire line of transmission parts including kits, hard parts, manual and differential components, torque converters and reman units. The company’s facility consists of 16,500 square feet of warehouse and office space that includes bays to facilitate common carrier shipments and deliveries and a “will call” parts counter that the company says does a good deal of business with local shops. Salesperson Dennis Simmons says the parts counter is where, nearly every day, a customer comes when he’s a little unsure about the specific part for a transmission or version of a transmission he’s working on.

Like most specialty transmission parts distributors, MSTP has space devoted to a kit assembly line where paper and rubber kits are combined and packaged with other components to make up the so-called “pizza box” kits that builders need to complete an overhaul. With but 11 people employed, most wear a couple of hats so that the warehouse crew combines packaging kits with stocking shelves and pulling orders.

Lorraine Lynch’s late husband, Gary, founded MSTP, formally opening the doors on Dec. 26, 1988. Lorraine explains that this was a good time to start operations as the industry mostly shut down between Christmas and New Year’s Day affording the couple a chance to get organized and ready for 1989.

Gary passed on Christmas Day, 2009, leaving a legacy picked up by Lorraine and a staff of 11 who have successfully continued the operation he built. In sharing with us the story of Gary and the early days of the company, Lorraine mentions a number of companies and people who pioneered the transmission aftermarket.

“Gary attended school in Kansas City where he’d learned about transmissions and vehicle repairs. Even in high school he loved everything about cars. He used to race at Cordova (International Raceway),” Lorraine says, referring to the drag strip about 25 minutes northwest of Davenport. “At that time, back in the 1950s, it was just a place where they took their cars on the weekend to race against each other.

“Gary had a friend whose father owned a transmission shop where he went to work. He eventually was assigned to do the parts buying for the shop. Gary was blessed with a wonderful memory. He knew off the top of his head what parts went with what transmission and that kind of thing.

“One of the parts suppliers at that time was Excel Industries, a Chicago company owned by Rod Aaronson. One of his salespeople called on the shop and eventually he and Gary became friends. At some point, Rod called and offered him a job working for Excel. He liked living in a small town but the job would require him to move to Chicago. Rod was insistent and convinced Gary to try it out for two weeks and then make his decision. After the tryout period in Chicago he stayed on with Excel for about 10 years.

“Homesick for our smaller town, we moved back while Gary, for a brief period, continued his sales job for Excel. Before starting MSTP, Gary would hold similar positions with New York parts distributors Ajac and Franklin.

“At that point, Gary was considering being his own boss and he sought and received permission to purchase hard parts from his employers at Franklin and then resell them. And so it was that I came to have a basement filled with hard parts until we opened on December 26 of 1988.”

He says that the company delivers to routes going out in about a 25-mile radius of Davenport. The company’s most distant customers are usually supplied via UPS, FedEx or a similar service. And, says Donahue, customers out to as much as 100 miles away are serviced by a contract courier who delivers to drop boxes and similar arrangements customers prefer.

Donahue stresses that while the company decides which delivery method will be used for each order, it is the needs of the individual customer that determine the choices made.

“With overnight shipments, we can serve nearly any customer who would require it with parts the following morning. That’s the kind of thing that can change from day to day and from job to job. Our salespeople are very good at collecting that information in addition to the parts order and determining how to deliver that order to that customer,” he explains.

And, Donahue continues by saying, “We know our operation is small by comparison to the national chains. I know we take pride in what we believe to be a true advantage for us, as we have the ability to pay very close attention to the preferences of our customers while offering at competitive prices on all the products a professional transmission operation would require.

“The size of our operation, coupled with the experience of our people, allows us to focus individually on each customer. The sales group is the customer service department and they come to know their customers very well. And being small doesn’t mean the people who work with customers don’t have all the training and parts experience that customers need and expect in this industry.

To conclude, Donahue gathered his employees and asked them what they thought was the foundation of Mid-States. “They told me,” he said, “What makes Mid States unique is our dedication to the knowledge of our industry. We know transmissions. We search for those hard-to-find parts that most others don’t carry or don’t have access to. We make sure we understand the needs of our customers and take the time to formulate close relationships with them. We have a family feel with every customer. We are dedicated to making sure we keep ourselves up to date on information and parts that we carry. We try to make everyone feel like part of the family.

“Mid States meets transmission builders’ needs by bringing over 30 years of experience into play. Our knowledgeable staff takes the time to make sure each and every ordered item is correct and that it fits the needs of our customers. We have a vast variety of parts ready in our warehouse and are always monitoring to make sure we carry all the up-to-date products needed to meet those needs.

And, as a final thought, Donahue grins from across the MSTP conference room table and asks, “Speaking of unique, how many guys in this industry have a beard like this one?”

Mike certainly has a point!

Advertisement
In this article:Iowa, Mid States Transmission Parts in Davenport