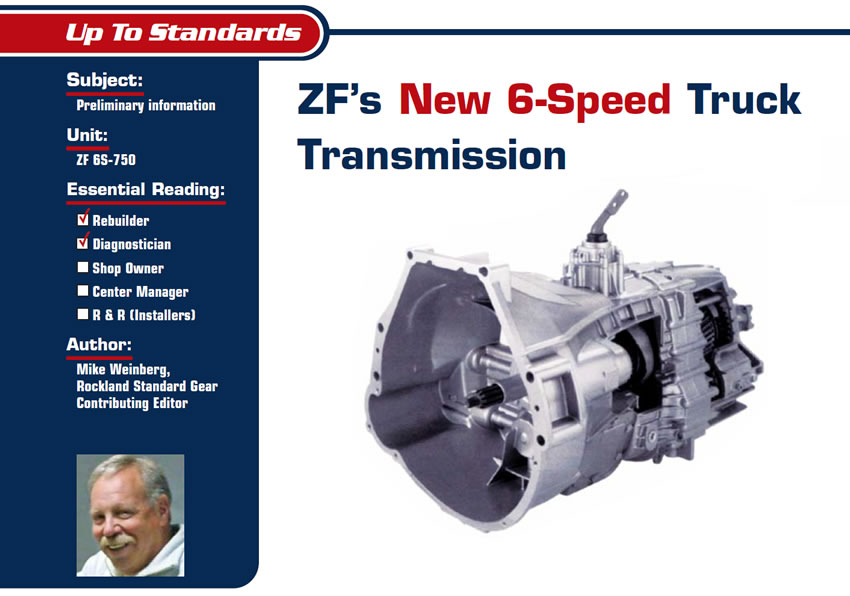 ZF has been supplying Ford and GM with light-duty truck transmissions for many years. Ford pickups and stripped-chassis vehicles come equipped with five-speed S5-40, S5-47 and S5-47M transmissions. Late models of both GM and Ford trucks feature the six-speed S6-50 series. The latest evolution of the six-speed design is the 6S-750 series of six-speed transmissions for the Ford pickup and stripped-chassis models. This unit is similar to the S6-50 but has a revised gear train and synchronizers to handle the increased power from the newer Ford diesel power plants.

The 6S-750 is similar in appearance to the previous six-speed design and features an aluminum bellhousing, center and rear case. These are center-support transmissions, which means the front case and extension housing bolt up to a center support to give added strength and better bearing support to the large gear train in this unit. This six-speed is big and heavy with a dry weight of 235 pounds. This unit is equipped with an internal oil pump which is a gerotor design driven off the front of the counter shaft. The pump gears sit in a pocket machined into the front of the case and provide pressurized lubrication for the gear train. The transmission is equipped with cooler fittings and lines and a heat exchanger similar to those we know in a vehicle equipped with an automatic transmission.

As you can see by the ratios, this transmission is designed for serious pulling power and has an overdrive gear for fuel economy at highway speeds. When diagnosing this unit, remember that fifth gear is direct drive, instead of the usual fourth-gear direct drive in most transmissions. Looking at the ratios also tells us that the first gear is meant for heavy-duty pulling with loaded vehicles, and this unit probably will be driven in second gear from a dead stop with the vehicle empty, because of the very large step between first and second. It is obvious that you will run out of revs in first gear very quickly.

Characteristics of this transmission are:

There seems to be no end to the increasing size of the light-truck designs. Increased diesel-engine horsepower and torque, along with larger-capacity GVW, GCW and cab size, have resulted in the need for much beefier transmissions.

There have been considerable upgrades to the automatic transmissions found in these vehicles, with high-torque units from Allison and Ford grabbing most of the market share. Like everything else in the modern age, the driver’s skill level is declining and more buyers are opting for automatics. This coupled with the new designs in five-and six-speed automatics has caused a slight decline in vehicles equipped with manual transmissions.

There is, however, a good portion of the buying public that wants the added driver control of a manual transmission. This trend in size and torque output has created the need for an upgrade to the S6-650, which resulted in the 6S-750.

Outside of the fact that they are heavy and require a few essential tools to rebuild, these units are no more difficult to work on than the earlier ZF five-speeds. One of the diagnostic issues to consider is that these units are used behind diesel engines. As a result, they are prone to gear rattle or neutral-rollover noise. You can save yourself some lost time and increase customer satisfaction by understanding the cause of this type of noise complaint.

Gear rattle occurs because engine harmonics are transferred into the transmission, causing the gears to rattle at idle or during acceleration. A quick test for this is to slowly increase engine idle in neutral and note at what speed the noise goes away or floats out. If you can rev up the vehicle to 2,000-2500 rpm and the noise goes away, the problem is not in the transmission. Look for a bad dual-mass flywheel, worn or damaged clutch damper springs, an incorrect clutch for the application, an out-of-time injector pump or a problem with the fuel injectors.

Gear rattle will not damage the transmission but will bring in customer complaints. Taking the transmission apart will not solve the problem. If you want to see it in action, drain the oil from the unit and remove a PTO cover with the truck on a lift. Start the engine in neutral and you can see the gears shake and vibrate as the engine harmonics give them an epileptic fit. A careful evaluation of the clutch components and the timing of the diesel power plant will end the problem. If the noise does not go away with an increase in engine speed at any point, the problem usually will be internal, as gear damage and bearing noises only get worse with speed increases.

Advertisement
In this article:6-speed, GM & ZF 6-speeds, Up To Standards, ZF