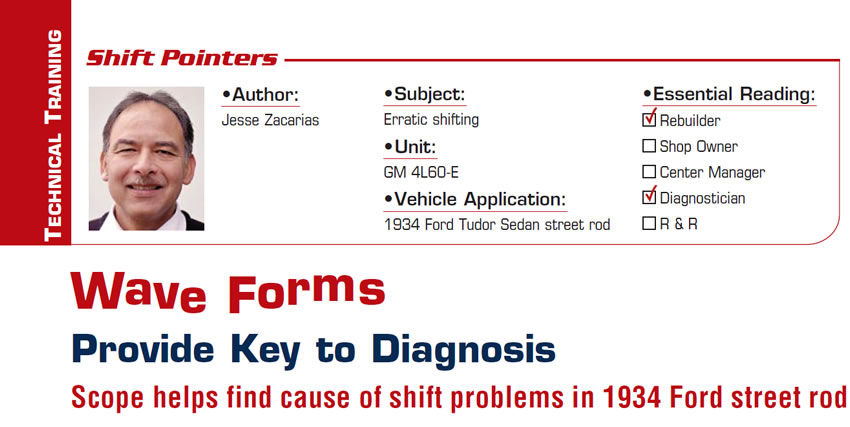 I’m sometimes asked why I take on some vehicles that require more time to fix than I can charge for. My answer is, “because I like the challenge”; besides, you get to learn things you probably wouldn’t have an opportunity to see otherwise. Let me use this 1934 Ford Tudor Sedan (Figure 1) with a late-model GM drivetrain as an example.

I’m sometimes asked why I take on some vehicles that require more time to fix than I can charge for. My answer is, “because I like the challenge”; besides, you get to learn things you probably wouldn’t have an opportunity to see otherwise. Let me use this 1934 Ford Tudor Sedan (Figure 1) with a late-model GM drivetrain as an example.

The vehicle would perform flawlessly until you reached about 35 mph, at which time it would shift from fourth gear to third and at times to second. We noticed that data for both the output-speed sensor and the vehicle-speed sensor would fluctuate when the problem occurred (figures 2 & 3). Dave had disconnected the aftermarket speedometer in the dash to eliminate any possibility of interference, so it was not operating when we got the vehicle, and he also had disconnected the alternator to eliminate alternator interference.

We had first figured that the problem had to be with the VSS or the VCM, but with each of those parts having been replaced with new ones twice, that was not likely. So we started by checking the basics: the battery, the charging system, and voltages and grounds at the VCM.

To see the VSS signal going into the VCM, we back-probed the VCM at pins 29 and 30 of the C1 connector. At first glance the signal appeared normal but we thought the voltage level was low (Figure 4). Although we normally have to set the scope to 100V scale, here we had to set it to 5V to see the wave, but we did not give it a second thought.

However, after driving the vehicle and recording the VSS wave and playing it back, we noticed that the wave form would oscillate up and down (figures 5 & 6), something we had never seen before.

We removed the extension housing from the transmission to check the exciter on the output shaft to see whether it was loose or damaged, but everything was fine. When reinstalling the extension housing, we noticed that the speed sensor was pointing to the front of the car (Figure 7). That seemed odd.

Apparently the speed-sensor bracket had been modified to allow the sensor to be rotated because the wiring harness was made too short to reach the sensor, and whoever replaced the speed sensor reused the same bracket for the same reason. All we did was rotate the speed sensor to point in the right direction, and the problem was solved. The wave form stopped oscillating and the voltage level increased to 34V peak to peak (figures 8 & 9).

Because the speed sensor had been rotated 90°, the magnetic poles in the VSS were not aligned as designed with the exciter on the output-speed sensor, therefore affecting its lines of flux. With this being a custom vehicle fitted with a GM drivetrain, we can see how this can happen, but in an original-design GM vehicle that would be less likely.

But, then, how would I have learned what happens when you change the angle of the VSS? I get that kind of opportunity only by taking those challenges. The lessons learned here can be applied to virtually any analog inductive pickup. This problem shows us the importance of using a scope and getting familiar with wave forms, perhaps even storing them for further comparison.