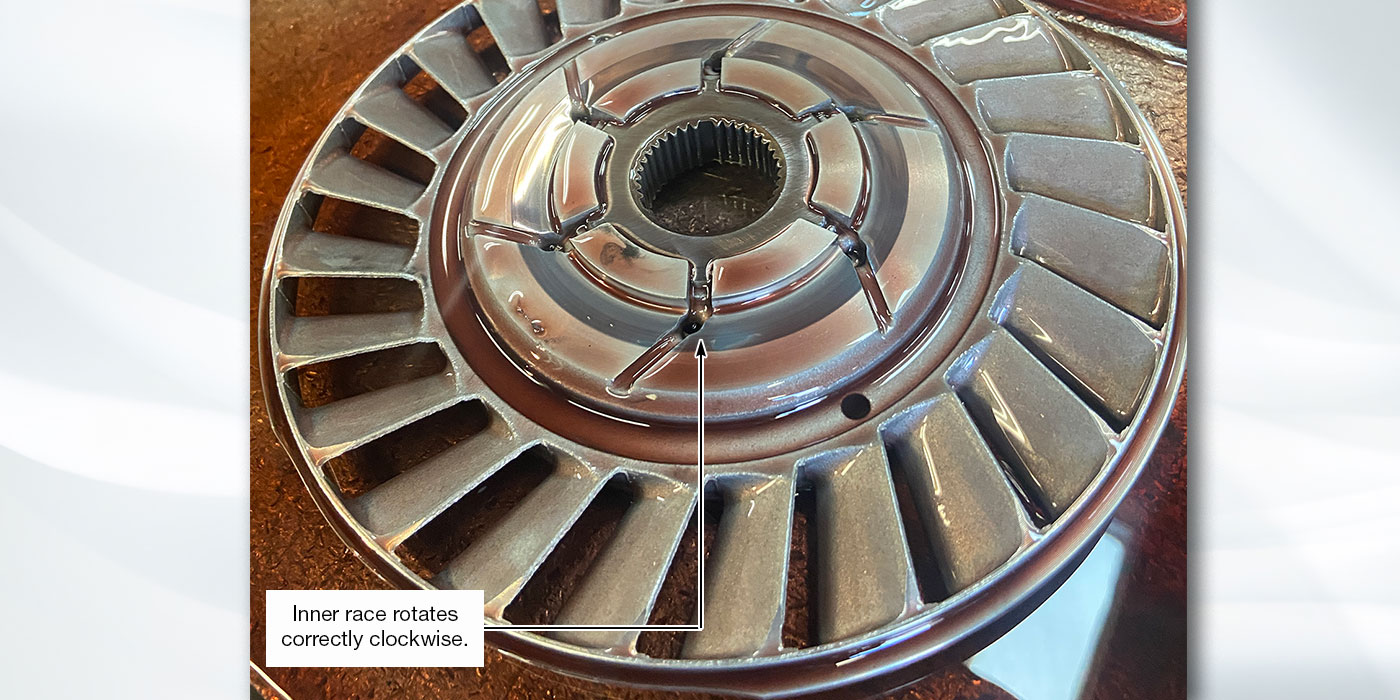 It is Friday afternoon at Cooter’s Transmission, and the last of the day’s jobs are being wrapped up. Everyone is getting ready for spirits and good food at Buster’s Pub.

A Ford 6F35 from a 2015 Ford Explorer rebuilt earlier in the week is installed, and something is not right. John, the installer, puts it into gear after filling with ATF, and it doesn’t feel normal. It has a vibration like a broken mount. In Park and Neutral, the engine runs fine, but when in gear, it feels like something is dragging the engine RPM down.

Darrell, the diagnostic tech, uses the Verus Pro to examine the truck, noting that it wasn’t doing this when it came in—it had the typical slipping torque converter but ran great otherwise. He looks over the list of parts replaced: torque converter, solenoids and clutch kit—all common replacement items.

After looking at both engine and transmission data, John and Darrell decide to hook up a pressure transducer to the mainline pressure port on top of the case and perform a line pressure check. Upon checking, Park is at “55 PSI,” Reverse at “90 PSI min, stall 300 PSI” and Drive at “75 PSI min, stall 300 PSI,” which means there is no indication of line pressure faults. They were also able to operate line pressure solenoid while monitoring pressure with bidirectional scanner command and transducer. Next, they drive the truck briefly to see if all the gears function normally under a load, and find that the road test is good with all six gears and TCC. The only abnormalities are that shifts feel firm and clunky, coast downshift is pronounced and while idling in gear, it still feels like it wants to drag engine RPM down.

Another mechanic, Jeff, gets involved and asks: “Can’t you tell the converter lockup clutch plate is dragging? Let’s look at cooler flow.” The group decides to remove the cooler return pressure port on the back of the case and attach a flow meter diagnostic tool between the port with a hose, and then to the removed hose to cooler out. This port will check flow after the entire cooling system. After spending 15 minutes performing the cooler flow test, it’s normal at almost 1.4 gallons per minute while in Park/Drive at 1,200 RPM.

Jeff and Christian take the Explorer for a test drive. They return after 10 minutes, and Jeff says the stall speed RPM seems low. You really can’t check stall speed because it’s already at or lower than idle RPM. Something is wrong with the converter, he thinks.

At Buster’s later on, Jeff brings up the 6F35 converter, saying they were in the mall parking lot with no throttle, and the truck would drive aggressively all over. Christian says that the only thing that could ordinarily bring a converter stall speed that low would be the one-way clutch freewheeling in both directions. This, they then realize, is the problem.

Let’s examine how all of this transpired. Ford’s EcoBoost is a performance engine, especially at high RPM. Coupling that to a 6F35 transmission, the converter is usually what suffers the most. Converters come in with lockup friction lining usually shredded from the front piston of the converter and the one-way clutch in the stator of the converter (Figure 1) blown through, especially with the 2.0-liter engine.

Symptom: The vehicle exhibits a vibration-like feeling in gear and a sensation of trying to drag RPMs down. Stall speed is seemingly at an abnormally low RPM.

Test: In a parking lot, place selector in Drive range, release foot from brake. If the vehicle will drive aggressively with no throttle applied around the parking lot, then most likely the one-way clutch has failed and will require a replacement converter.

Thank you to Adolf Zierke who first discovered this complaint and to TavoMatic Transmission Parts for items utilized in this article.