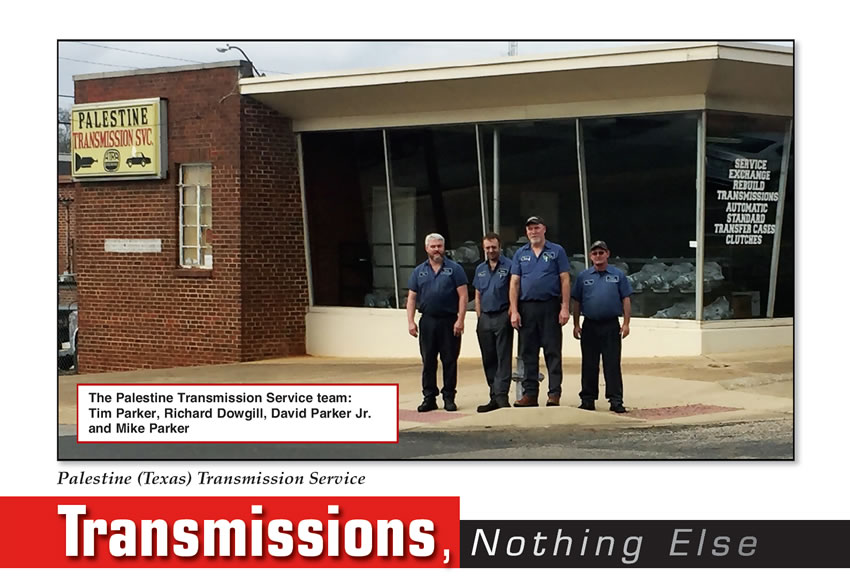 “I rebuilt my first transmission when I was 15 years old, and I pulled my first one out when I was 9, an old Powerglide. My dad might have helped me a little bit, but for the most part I did it myself,” David said. “So I’ve been around the shop. That’s all I’ve ever done.” David said.

David Parker Jr. began his work in transmissions when he was just a boy in his father’s shop, kept at it during summers and later split days between school and shop. He took ownership of the business at age 19.

“I rebuilt my first transmission when I was 15 years old, and I pulled my first one out when I was 9, an old Powerglide. My dad might have helped me a little bit, but for the most part I did it myself,” David said. “So I’ve been around the shop. That’s all I’ve ever done.” David said.

His father opened a two-bay shop in 1970 in the east-Texas town of Palestine. They moved in 1972 to a building with four bays — but no lifts. They used jack stands and bumper jacks. Relief came in 1989, when the Parkers moved to the present location on the courthouse square, a block-long building dating from the ’40s that once housed a Ford dealership.

The shop is bigger and accommodates lifts, David said. “There’s plenty of ceiling height for lifts – 10 lifts in the shop now. That made all the difference, being able to work on stuff.” In addition, the shop has four tear-down benches and as many building benches.

Palestine Transmission Service is the only dedicated transmission shop in town. From the beginning, the Parkers have focused strictly on transmissions and transfer cases – no general repair – and the shop still generates plenty of business, David said.

“We like specializing in one specific field,” he said. “That seems to work so much better. When you go into a repair facility, where they do bumper-to-bumper repair on vehicles, and you got a transmission problem, they’re not going to be as apt to take care of you than a specialized shop would be. …

“We’re here to make a living, but we’re here to offer a service to our customers, and we want to do our best job we can. We’ve got more to offer them by specializing in transmission repair only.”

The business benefits from its location in downtown Palestine, and the shop pulls customers from small towns and rural areas, 75 miles around. Some customers come from 200 miles away.

David performs office duties and rebuilds transmissions. Three employees work with him: David’s brother Tim Parker, who rebuilds and performs diagnoses; installer Richard Dowgill; and David’s cousin Mike Parker, handling various tasks including maintenance and parts cleaning. Throughout the history of the company, family members have been working in the shop, a practice that has worked very well for the business, David said.

The shop handles 10-15 transmission jobs weekly. Rebuilding comprises about two-thirds of the shop’s work, and the other third is R&R. They rely on Transtar for parts and Precision International for torque converters. David once was a drag racer; now he restores ’66-77 Broncos. The shop works on performance vehicles, mainly dragsters, as well as vintage vehicles. The oldest car they worked on was a 1951 Packard.

Vehicles they see are mostly American models – plenty of pickups, with farmers pulling trailers and hauling hay, as well as hunters with 4WDs.

“We have a river not too far from us where they’re down there playing in the mud and tearing up stuff,” he said. “And deer season was just over with. One guy shot his transmission with his deer rifle. We get one or two a year of those – shot with a deer rifle, right through the bell housing into the torque converter. Kills the motor, just shoots it dead. We see a lot of different stuff.”

David will readily work on vehicles with extended warranties, recognizing that customers who have them deserve to be served, he said. Other shops may find this kind of work irksome and avoid it, he said.

“They’re like a crawfish when somebody shows them an extended warranty – they start backing up. They don’t fool with them,” he said. “It’s a process you have to go through. But the customer paid good money for that policy. Somebody somewhere needs to work on them, so we welcome people with extended warranties.”

The shop acquires technology, such as scan tools, as needed. Furthermore, David was pleased to say that he never has computer problems. Of course, that is because he has no computer, as well as no internet – and he’s entirely content without them.

Service is in the name

For advertising, David relies on repeat customers and word of mouth. The success and longevity of the business is due to a Golden Rule approach to customer service, David said, mindful that he’s offering a service, not just taking people’s money.

“For a customer who comes into the shop, I try to put myself in their shoes, like it was me coming in to have something repaired. I don’t know how many times over the years we’ve had people come in, and what they needed was something really insignificant, something really small we were able to do for them. They were ready to have the transmission rebuilt. That’s the way we run our business. I look for a reason not to rebuild the transmission instead of a reason to do it. That Golden Rule is what we operate on. I want the same kind of treatment when I go somewhere.

“My dad told me when I bought the business from him, if you do what you’re going to say and you do it at a fair price, and treat people the way you want to be treated, you’ll stay busy, and that’s worked really well for me over the years.”

David’s service-oriented approach extends to local customers who have transmission trouble when taking a long-distance trip. They’ll call David from the road, and he’ll recommend an ATSG-affiliated shop in the area.

“ATSG expects people to treat people right,” David said. “If they’re waving their (ATSG) banner, it’s supposed to mean something. It’s out there for a purpose, it’s letting people know you’re identifying with an organization that has good people in it.” Palestine Transmission Service has been a member of ATSG since 1992, he said.

While the shop still generates sufficient revenue, David said business fell off markedly after Sept. 11, 2001, and has not recovered. “It was a daylight-and-dark difference,” he said, worse than the Great Recession of 2008-10. However, the customer base has held up, and the trend of repairing instead of replacing vehicles has helped the shop to carry on.

“You might have to kill some spiders under some vehicles that have been sitting in people’s yards for a while, but people are bringing them in and getting them repaired,” he said. “I’m thankful that our customers are as loyal to us as they are, and they recommend us, because that’s where the work comes from.”

David had intended on having his son, David Parker III, to take over the business. Instead, he went to medical school.

“So I’ll be running it, looks like, until I retire,” David Parker Jr. said. “I enjoy what I do. There’s a lot of satisfaction in running a business for me, helping people, putting a smile on their faces when you give them good news instead of bad.”

He has no goals for retirement.

“We’re just going to continue training, going to seminars, staying up on the latest transmissions, to continue to provide the service that we’ve been providing,” he said.